‘The crackling of Juul’ on every bathroom trip 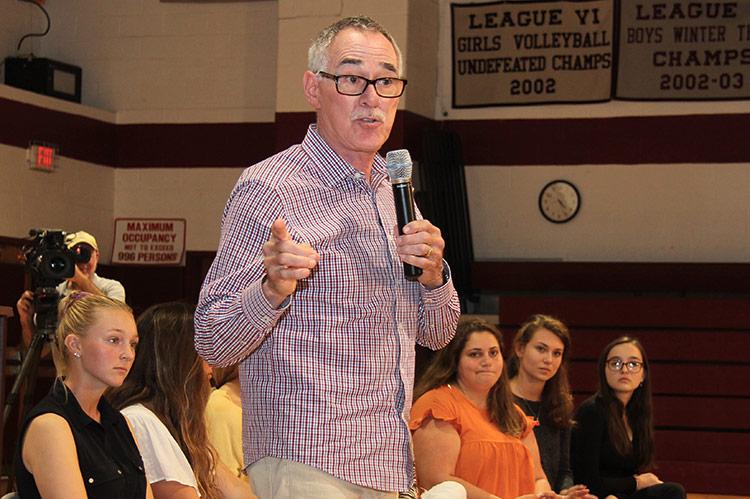 Teen vaping addiction extends beyond the South Fork to school hallways, bathrooms, and buses across the nation, but a group of students and administrators here decided that East Hampton and Southampton would be good places to start tackling the issue.

Seven students from East Hampton High School, along with Karen Kuneth, one of the school’s assistant principals, appeared before the town board on Oct. 1 and then sat in front of an audience of about 60 people the next night to testify to the extent of the problem. A similar event took place at Southampton High School last Thursday, with a group called Students Against Destructive Decisions leading the way.

“Almost every time I go to the bathroom, I can hear the crackling of Juul or [another] e-cigarette,” Olivia told the town board.

“One aspect that I’d really like to emphasize,” Samantha said, “is the need to spread awareness and increase public knowledge . . . [on] how much of an epidemic it really is.”

Lucia said Juul “invaded” teens’ social media channels, and Erin said there’s a “large disconnect” between how teens and adults see vaping. Valeria is trying to bridge the education gap for the Latino community, saying, “All need a voice in this conflict.”

“I think it’s unacceptable that a majority of our local high school is addicted to nicotine,” Zoe added. “[It] reaches every corner, not just the bad apples.”

And at last week’s forum, Julianna told the crowd that teens don’t admit to being addicted. “They’re making it out to be a joke,” she said.

Two experts, Victor DeNoble and Bonnie Halpern-Felsher, also addressed the issue last week in East Hampton and Southampton. Mr. DeNoble is a scientist who formerly worked for Philip Morris and is now known as one of the first whistle-blowers on Big Tobacco, and Ms. Halpern-Felsher is a professor of adolescent medicine and epidemiol ogy at Stanford University. They travel nationally, often appearing together, to promote awareness of the issues.

Mr. DeNoble explained that nicotine — the addictive component in vaping products as well as cigarettes — takes about seven seconds to enter the brain, and said it has a “short half-life” after it does so. “The only way for a person to feel normal again is to put nicotine in their brain,” he said.

He said it may be “too late for these guys” — meaning high school students in general — to successfully get the message about the dangers of vaping. “They’re too old. Most of my work is with third, fourth, and fifth graders,” said Mr. DeNoble, who often shows a preserved human brain, one that had been addicted to nicotine, when he gives talks. “If you’re going to do some brain education, do it not only in the high schools but also in the elementary and middle schools.”

There are several manufacturers of vaping products, but Juul has an overwhelming share of the market, up to 85 percent, some statistics show. On its website, Juul says it was developed as “a satisfying alternative to cigarettes” with “a simple interface, flavor variety, and lack of lingering smell.”

“Juul Labs exists to help adult smokers switch from combustible cigarettes,” it says. “The ingredients of our products do not include THC, any compound derived from cannabis, or vitamin-E compounds like those found in cannabis-related products.”

The website says Juul pods contain nicotine and that they are addictive, but it also advertises a coupon for $25 off one’s first online order.

Juul has acknowledged on its website that youth vaping “has become a serious and urgent problem.”

“At Juul Labs, we have no higher priority than combating youth use,” it says. “As data has emerged about the scope of the youth vaping issue, we have taken a series of escalating steps.”

Ms. Halpern-Felsher asked the audience at East Hampton to raise their hands if they’ve never heard of Juul. No one did so, but six months ago, she said, many hands were going up when she asked that question.

Vaping products have been manufactured to look like computer flash drives and other commonplace items.

Surveys of teens have indicated that about 27 percent of high school students reported using an e-cigarette or vaping product in the last 90 days, but Ms. Halpern-Felsher disputed those reports, saying it’s closer to 50 percent, and as much as 75 percent, of students.

The nicotine content of Juul pods is equivalent to two packs of cigarettes, about 41 milligrams, she said.

“It rewires and changes the brain. Your heart beats faster. You have trouble breathing and damage to your lungs,” Ms. Halpern-Felsher said. “We do not know if those are all caused by Juul . . . but they are all linked to vaping.”

Juul’s public relations department did not respond to an email seeking comment this week.

The effort to ramp up awareness about vaping on the South Fork comes on the heels of political and legal action in the last two weeks. The Three Village Central School District has filed a lawsuit against Juul, claiming the company “succeeded in addicting a generation of youth to nicotine.”

A 19-year-old Massapequa man is also suing Juul. Gov. Andrew M. Cuomo recently signed an order banning the sale of flavored vape cartridges, but a state judge granted a temporary restraining order preventing the ban from taking effect after three vaping-product manufacturers sued the state one day before the ban was to begin.

State officials have announced that the first vaping-related death in New York State also occurred this week — a 17-year-old in the Bronx died of a lung illness on Tuesday.

But “we are beginning to see the turning of the tide” against vaping, said Andy Birchfield, an attorney from Alabama who also spoke at East Hampton High School last week. “Juul has spent a lot of money on regulators; they have spent a lot of money on congressmen, and at every level — state, federal, and local,” he said. “Now we have congressmen who are stepping up and saying . . . we must do something. Washington is a key component.”

Indeed, in a letter to East Hampton’s administrators and the seven students last week, Representative Raja Krishnamoorthi of Illinois said that “more must be done.”

To the students, he said, “Your grassroots leadership is the impetus for action on Capitol Hill, and I implore you to keep up the pressure.”