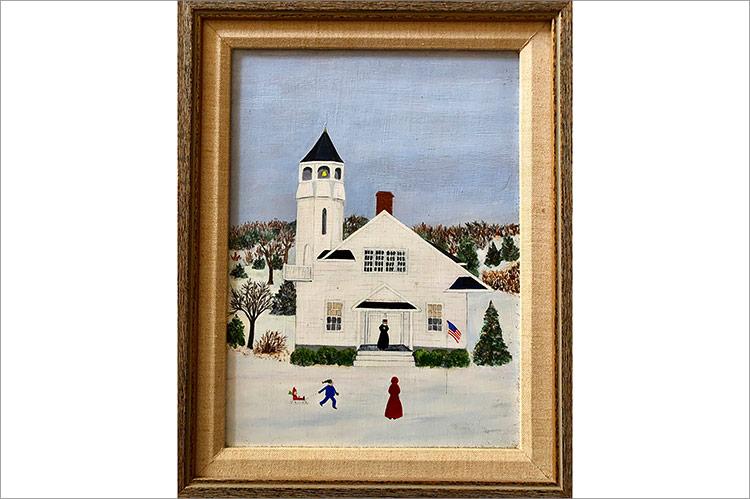 An oil painting of the Wainscott Chapel was recently returned after going missing more than a year ago.
Wainscott Sewing Society
By Christine Sampson

The case of the Wainscott Chapel’s missing painting has been solved.

A few months after the Wainscott Sewing Society’s annual rummage sale at the chapel in the summer of 2018, Hilary Osborn Malecki noticed that an important oil painting had disappeared.

The painting, which depicted the chapel on a snowy day with children sledding and the American flag flying, had been given to the sewing society in 1987 by the woman who painted it, Shirley Overton Voss. Ms. Voss had also donated other paintings locally, including one in 1986 to the East Hampton Ladies Village Improvement Society on the occasion of its summer fair.

Ms. Voss, who lived in Bridgehampton, Islip, and Florida, died in November of 1994. Her obituary in The Suffolk County News described her as a well-known painter who was also vice president of a funeral home.

But with the Wainscott Chapel painting gone, Ms. Malecki said the next logical step was to put up wanted posters at the rummage sale. Like an old Wild West poster showing a fugitive’s face, the Wainscott Sewing Society’s posters did the trick.

According to Ms. Malecki, a woman attending the rummage sale this year saw the posters and approached the volunteer who was working at the cash register that day. The woman told the volunteer that she had bought the painting last year, as it was in the entryway with a number of other paintings, and that it was hanging in her mother’s house in Pennsylvania.

That was in August. It was returned to the chapel on Friday.

“Now we are much more conscious about all the things we don’t want to lose,” Ms. Malecki said this week. No one, however, happened to get the name of the person who returned it.

“We’re so happy that she brought it back to us,” Ms. Malecki said. “It’s a feel-good story that makes everyone happy. That’s what the chapel is all about, and it shows you there are good people in the world.”

The chapel is owned by the Wainscott Sewing Society, a nonprofit organization founded 150 years ago. In addition to its popular rummage sale and strawberry festival, the group also holds community potluck dinners, such as the one planned for 6 p.m. on Nov. 8 this year, and awards scholarships to local students.