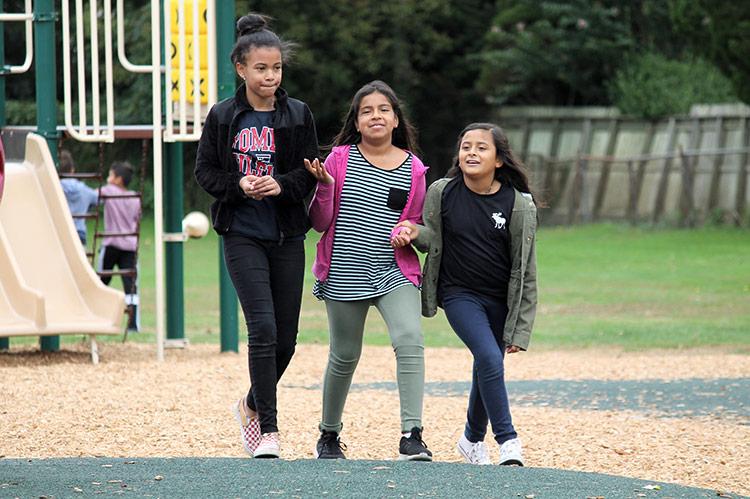 The research spoke so loudly that Beth Doyle and Russell Morgan heard it as a mandate: More recess time is better for students, even if it means sacrificing a bit of classroom time to make it happen.

Now, at the John M. Marshall Elementary School, a quiet decision to boost lunchtime and recess this year to 30 minutes each, up from 20 minutes, is paying dividends across the board, they say. To achieve the extra recess time, Mr. Morgan, the assistant principal, rearranged the school’s schedule and found a total of 20 minutes that could come out of the instructional day.

“We felt it was worth giving up that time because of the benefits of exercise, socialization, and movement. You’ll get more out of the students than if they are sitting for 20 more minutes,” Ms. Doyle, the principal, said this week. “When they are with you, they’ll be able to focus, concentrate, and think more clearly.”

On Tuesday, the entire fifth grade, about 80 kids, appeared to use their recess time wisely. They flitted about the playground, took shots on the basketball court, played foursquare and hopscotch, organized a soccer game.

Hugging a bright green rubber ball, Liliana Hopson said she was enjoying having more recess time this year. “I think it’s fun that we get to have more time to spend with friends if your friends are in a different class,” she said.

Matthew Araya, who had just put in some time in the soccer game, also likes having more time to play. “We can spend more time outside and we get more energy out,” he said.

The change — which school administrators did not widely publicize until Mr. Morgan announced it at a recent school board meeting — has already had results. Discipline incidents during recess are down 35 percent from last year’s numbers. Ms. Doyle said it has buoyed the school’s culture. And the teachers have noticed a difference.

“It’s great. The kids come back sweaty and tired, but you can tell they’re getting exercise,” said Kylie Tekulsky, a second-grade teacher. “They are more focused and seem happier.”

Combined with a few minutes of meditation after recess, Ms. Tekulsky said, the kids are “calmer in the afternoons. They’re getting their energy out.”

John Marshall’s two top administrators made another change, too, this year. During recess, the teachers are putting in one of their “duty” periods, similar to hall monitoring or pickup and drop-off supervision, while their students play. That means more social interaction between teachers and students, and teachers can intervene if a situation arises that needs attention.

The publication Education Week has reported that as of 2017, fewer than one in three children were getting enough exercise, leading to higher obesity rates and other health problems. One of the best ways to boost benefits of recess, the publication said, is to “get the adults involved.”

According to a July 2018 report in Education Week, “Researchers found that children with a longer recess period spent a larger percentage of their recess time being physically active than students who spent less time at recess. They also found that having more adults on the blacktop participating in play and mediating conflicts also increases students’ level of physical activity during recess.”

Ms. Doyle planted the seeds of longer recess at John Marshall several years ago by introducing “brain breaks,” which are small increments of physical activity between subjects or projects in classrooms. Then, two years ago, the school switched indoor recess on cold or rainy days to be in the gymnasium, rather than in the classrooms.

Mr. Morgan “gets a lot of credit for this,” Ms. Doyle said. “He was able to figure out the schedule to make it happen. He has a million things he’s good at, and that’s one of them.”

At the Springs School, Eric Casale, the school principal, said children get 25 minutes of both lunch and recess, plus another 20-minute recess period almost every day. Mr. Casale also posted gym teachers on lunch duty for the first time this year so they can organize games and set up other activities for the kids.

“Giving them the opportunity to go out and get that physical activity in is really important,” Mr. Casale said. “I know when I’m cooped up inside all day, I get a little stir crazy.”

In Sagaponack, children get three recess periods each day: about 20 minutes in the morning after snack time, 25 minutes after lunch, and another 15 minutes later in the afternoon. At the Bridgehampton School, elementary-age children get 25 minutes for lunch and 25 minutes for recess, and its principal, Michael Miller, said teachers frequently add brain breaks.

The extended recess time at John Marshall puts the school on par with the Montauk School and the Amagansett School, which have been doing 30 minutes of both lunch and recess for quite some time.

“It’s changing across the Island,” said Maria Dorr, Amagansett’s principal. “It’s been a topic of discussion for a few years. We really do try to capitalize on physical activity.”