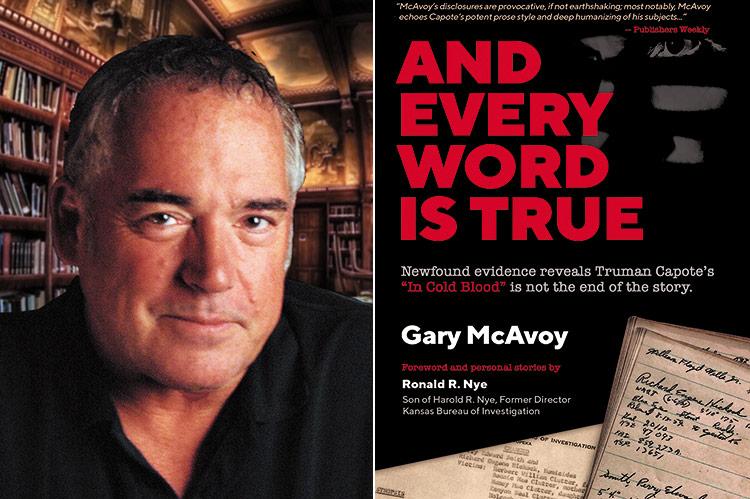 “And Every Word Is True”
Gary McAvoy
Literati Editions, $27.99

In 1959, two drifters entered the remote Kansas home of a wealthy farmer, Herb Clutter, in the dark of night. While serving time in prison, one of the intruders had heard rumors of a well-stocked safe in the Clutter home, but when they entered the farmhouse the intruders found nothing. The robbers then bound and gagged Clutter, his wife, and two teenage children, systematically killing each one in a gruesome style that was to send shock waves across the nation.

The murderers’ bounty? A pair of binoculars, a portable radio, and just over $40 in cash.

Shortly after, the writer Truman Ca­pote read about the murders in The New York Times and decided to investigate. The result was “In Cold Blood,” widely considered one of the greatest books of the 20th century and almost single-handedly spawning the true-crime industry that seemingly gets larger every year. Capote called the book a  “nonfiction novel,” which presumably gave him the leeway to dramatize facts for maximum narrative impact. Still, the author always insisted of “In Cold Blood” that “every word is true.”

Gary McAvoy’s ironically titled new book, “And Every Word Is True,” disputes this claim, or at least accuses Capote of guilt by omission. This assertion is based on passages in the previously unseen notebooks of Harold Nye, a Kansas Bureau of Investigation officer whom Capote had interviewed, and whose cache of paperwork and “memorabilia” was recently discovered in an attic and unveiled.

Though simultaneously compelling and overstuffed, “And Every Word Is True” makes the case that Nye’s notebooks contain smoking-gun evidence that the murderers, Richard Hickock and Perry Smith, were killers for hire rather than would-be robbers. The notebooks, based on K.B.I. interviews with Hickock, record the suspect referring to a “Mr. Roberts,” who had promised the killers $5,000 in return for the hit. The interviews contain such phrases as, “Besides, we had to make this look like a robbery. . . . Five thousand bucks is a lot of dough.”

The motive for a hit? Herb Clutter the businessman, Mr. McAvoy asserts, was not as beloved as Capote’s portrait. He had burned some major bridges. There were bruised egos and jealousy from less successful farmers. Most significantly, the pious Clutter was having an affair with a married woman.

Interesting as all this is, “And Every Word Is True” takes a good 200 pages to get there, as Mr. McAvoy spends the early part of the book chronicling the Nye family’s tribulations in trying to sell the “memorabilia” at auction (the K.B.I. tried to block the sale, claiming that the notebooks were state property; the author offers this as evidence of a cover-up). There is a copious back story on various K.B.I. agents who have only a tangential attachment to the case, and a digression on how Harper Lee’s contribution to “In Cold Blood” was, er, subdued by Capote. Lee (the author of “To Kill a Mockingbird”) was a childhood friend of Capote’s and allegedly helped with a significant amount of research for the book. Capote, however, always played down her contribution, even failing to thank her in the book’s dedication.

By the end, Mr. McAvoy’s research into the mysterious Mr. Roberts is tantalizing but inconclusive. Nor does he uncover evidence of anyone with specific intentions to harm Clutter.

As for the interviews with Hickock, even the author admits they could be the obfuscations of a sociopath looking to position himself to avoid the death penalty — an avenue he and Perry never pursued, oddly enough. Certainly the judge’s decision to invoke the death penalty was in part a result of the gratuitous nature of the crimes. If the murderers had fingered a third party, however, someone who had hired them for a hit, it might have saved them from their death by hanging in 1965. It was a sentence they appealed many times and seemed desperate to avoid. Yet they chose to be silent.

The only thing convincingly impugned here may be the character of Capote himself. Along with his dismissal of Harper Lee’s contribution, there is this dispatch from Nye’s notebooks, with Capote expressing his frustration with the prolix execution process:

“I assume the Kansas Supreme Court will have set a new execution date for Perry and Dick. And now I suppose they will go into the federal courts, and the whole thing will drag on into eternity! No, I’m not bloodthirsty either, but I do wish the damn thing would end. So that I can finish the book before I’m too old and feeble to hold a pen.”

Kurt Wenzel is the author of “Lit Life,” among other novels. He lives in Springs.

Truman Capote lived in Sagaponack. Gary McAvoy is a collector of historical letters and literary manuscripts.