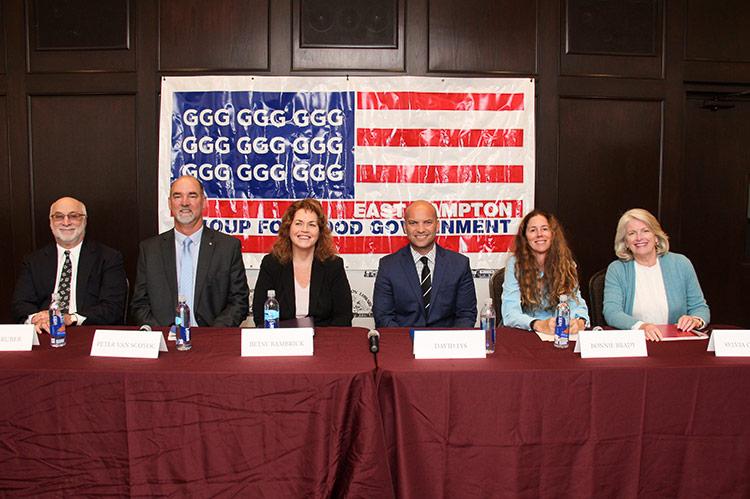 The candidates for East Hampton Town supervisor and seats on the town board took part in a debate on Saturday and will meet for another on Wednesday.
Durell Godfrey
By Christopher Walsh

The first debate between candidates for East Hampton Town supervisor and town board — at the East Hampton Library on Saturday — was a mostly civil discussion, the three incumbent Democrats fending off criticism from their challengers while making a case for their own re-election.

The debate, sponsored by the East Hampton Group for Good Government, saw discussion of a familiar range of topics including the proposed offshore wind farm, affordable housing, the board’s plan to relocate the town’s shellfish hatchery from Montauk to a residential area in Springs, the near-constant traffic to and from East Hampton Airport in the summer months, and other environmental and quality-of-life issues.

There are no Republican candidates for supervisor or town board this year. The challengers are instead grouped under the EH Fusion Party banner, a coalition of candidates aligned with various political parties — or affiliated with no party — though they will not appear on that party’s line on the ballot, either.

David Gruber, the party’s candidate for supervisor, said that “partisanship and one-party monopoly are getting in the way of solving our long-term problems.” There is a 5-to-0 Democratic supermajority on the present town board. “I solve problems,” said Mr. Gruber, who will appear on the Independence and Libertarian Party lines on the Nov. 5 ballot. “That’s what I do.”

He and Supervisor Peter Van Scoyoc clashed early, when the first question directed to the candidates concerned the proposed 15-turbine South Fork Wind Farm. Mr. Gruber, who has criticized the wind farm’s developers, referred to “the incorrect belief” that the wind farm would contribute to meeting the town’s renewable energy goals, saying that it is in fact an impediment to implementation of solar energy, which he called “the only technically possible way” to reach those goals.

Mr. Van Scoyoc, who is seeking a second term as supervisor, countered that the wind farm, to be constructed approximately 35 miles off Montauk, “would replace over 130 million pounds of coal being burned,” having an added benefit of reducing atmospheric deposition of nitrogen, which makes its way into the town’s already compromised waterways. The town cannot meet its energy goals through one source alone, he said, asserting that solar energy can provide only a fraction of the need. “We’re facing a crisis that affects our quality of life and our future,” he said of climate change.

Bonnie Brady and Betsy Bambrick, EH Fusion Party candidates for town board who will appear on the Independence, Libertarian, and Conservative Party lines, also criticized the board’s support for the wind farm. Ms. Bambrick decried “the false narrative” that the wind farm will “get us to the goal of 100-percent renewable.” She, too, called for greater emphasis on solar energy. Ms. Brady, executive director of the Long Island Commercial Fishing Association, said that “the whole point” of the wind farm “is to shave peak,” or offset electricity demand during peak periods, “and improve resiliency. It does neither.”

But Councilwoman Sylvia Overby, who is seeking a third term, called climate change “the biggest threat to marine life,” referring to recent reports of ocean heat waves that scientists say will severely disrupt commercial fisheries and aquaculture. “The faster we move away from fossil fuels, the better the environment and fisheries will be,” she said. She asserted that 70 to 80 percent of the town’s residents support the project.

One source of fossil-fuel emissions is the jets and helicopters that crowd the skies over the East End of Long Island on their way to and from the airport. While noise is the greatest irritant to those living under flight paths, several residents also complain about the polluting effect of air traffic.

Only when federal grant assurances expire in 2021, Mr. Van Scoyoc said, will the town be able to assert control of the airport, and “we’ll have an opportunity to close, or force, with leverage, reasonable restrictions that our community supports.”

But closing the airport, Ms. Bambrick said, “will only serve to have them land in private areas” with the town exerting little or no control over aircraft operations.

“The fact,” said Councilman David Lys, “is the airport has too many operations for a local municipal airport.” Mr. Lys was appointed to the board in 2018 and won a special election last year. He is running for his first full four-year term. He agreed that the board must be mindful of pushing air traffic to other places within the town, such as the privately-owned airport in Montauk. The airport is an asset, he said, but must be managed “so all of the East End can be happy with it.”

Ms. Overby agreed that the airport is an asset but “needs to return to its roots” by serving local pilots.

Mr. Gruber, a member of the town’s airport management advisory committee, said that his long experience battling the Federal Aviation Administration means that “We can get control of this airport if we put our minds to it, and save it as a community asset. I know how to do that.”

Mr. Gruber and Mr. Van Scoyoc sparred on the topic of affordable housing. The former complained that the comprehensive plan adopted in 2005 called for 1,300 new units for young adults, working families, and senior citizens, but in the last six years — while Mr. Van Scoyoc and Ms. Overby have been on the board — just 20 affordable units have been added. “We need to solve this by building housing densely so it’s affordable,” he said. “Otherwise, you will see the local community long gone” by the time the shortage has been alleviated.

That approach, Mr. Van Scoyoc said, would “basically destroy the character of the town.” The State Legislature has passed a bill allowing a .5-percent transfer tax for community housing funds, he said. “We should be . . . protecting the town from complete gentrification and McMansions,” he said. “Let’s keep existing neighborhoods intact, not bust our zoning and put three-story apartments everywhere.”

But the town has “lost an entire generation of Bonackers” due to the cost of housing, Ms. Brady said.

The town board is presiding over the first affordable housing project to come online in more than a decade, Ms. Overby countered, also citing a legislative tweak adopted in June that reduced the minimum lot size for detached affordable accessory structures on a residential parcel, increasing the pool of eligible properties. “We are working on housing in a variety of ways,” she said.

Ms. Bambrick pointed to the senior citizens housing complex at St. Michael’s Lutheran Church in Amagansett as a success that should be replicated in every hamlet.

Speaking to another topic that has engendered controversy this election year, Mr. Lys defended a plan to move the town shellfish hatchery from Montauk to Gann Road, adjacent to the commercial dock, as “a plan that shows good government.” Consolidating the hatchery operations in a new facility on Three Mile Harbor, where the waters are more conducive to growing shellfish than those of Fort Pond Bay in Montauk, will further the goal of seeding waterways with shellfish that filter water, he said. “The project is trying to benefit the whole town.”

But Mr. Gruber called it “about the silliest project ever proposed,” decrying a $5 million price tag to acquire the property and build a new facility that he said would save $23,000 per year in cost efficiencies achieved by eliminating the transport of juvenile shellfish from Montauk for seeding in waterways to the west. “Nobody in their right mind would do this with their own money,” he said, calling the proposal “an utter waste of money.”

Ms. Bambrick seemed supportive of the hatchery’s move to the Gann Road site, but added that it “has morphed into this enormous project” in a residential area, one that includes an environmental education and meeting center in an existing building. “I say go with the hatchery, get rid of that grandiose plan for a meeting facility.” Ms. Brady said that the project should be subject to rigorous oversight by the planning board, and wondered about its impact on those working on the commercial dock.

The candidates will debate again on Wednesday at 7 p.m., also at the library. That debate, sponsored by the League of Women Voters of the Hamptons, will see Mr. Van Scoyoc and Mr. Gruber square off separately, followed by the four candidates for town board.