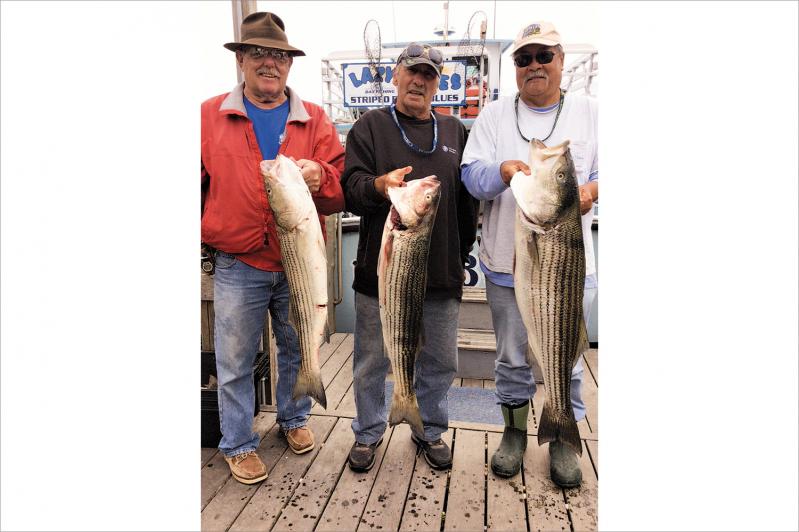 While fishing on the Lazybones on a recent outing, Bob Shaw, Andy Chiodi, and Mike Young landed a fine catch of striped bass in the nearby rips off Montauk.
Kathy Vegessi
By Jon M. Diat

I was way overdue. The last time I was out on my boat fishing was early August, when I took some relatives of mine from Boston out for a few hours of bottom fishing in Noyac Bay. We caught a few small porgies and some even smaller weakfish, but we also had a nice lunch and took a cruise around the moorings in Sag Harbor to gawk at all the mega­yachts that were in residence enjoying the good life.

It was a fun trip, so it’s hard for me to explain why it took such a long time to lift a rod and reel until I went out with a friend last week to see if any bluefish were lying in ambush at the rip located at the northern tip of Jessup’s Neck.

In general, the catches of blues have been off this year. Very cyclical fish, they showed up late and their numbers have been down from recent seasons. In the past few weeks, more have shown up in and around Montauk, as well as at Plum Gut and the Race, but over all, it has been a down year. Those who commercially fish for them are usually burdened with low prices, typically well under a dollar per pound. Not so this year, as the price has reached $2 at times. Those fortunate to come across a school of them have been rewarded handsomely for their efforts.

Coming off the new moon, the incoming tide was screaming as we approached the rip. Combined with an east wind, it was running at over four knots and according to the tide chart, slack water was only 45 minutes away.

My water gauge showed that the bay was still very warm, between 69 and 70 degrees. Still very swimmable for sure. A few gulls and terns were dive-bombing, chasing small whitebait and anchovies that were being pulled haplessly in the turbulent current. Four other boats were also there, including a commercial skiff intent on making a day’s pay. The scene looked very fishy.

My guest was unfamiliar with fishing a diamond jig, but she quickly got the hang of it and landed a small, one-pound blue in the first few minutes. I picked up a similar size fish and returned to the wheelhouse to repeat the drift. The action was constant for the next hour, with fish landed and released on every short pass we made.

As the tide finally decided to slowly slack off, the fish we landed were larger specimens in the four-pound class. On light tackle, few fish fight as hard as a bluefish. I had forgotten how much I enjoy fishing for them. As well, small bluefish, when properly bled, make excellent table fare, and we kept two for the dinner table.

I’m not sure when my next fishing trip will be, but I’m quite sure it will happen with the next break in the weather. It was great to be back on the water.

“I’ve been in my slip more than out of the inlet, due to rough seas,” said the light tackle guide Capt. Merritt White of Gunkholin Charters, concerning the recent bout of windy weather. “But there have been spectacular bass blitzes this fall. The strong numbers of the 2014 class of stripers have been sufficient enough to feed in a blitzing manner on the incredible amount of bay anchovies in the water.”

The veteran skipper added that the downside to this is that the false albacore run this year hasn’t been exactly stellar. “Given the finite amount of bait and the preponderance of the 2014 striper population, the albies have been literally pushed by the wayside,” he said. “Call it cyclical if you want. I call it basic ecology. Let’s see what the rest of October brings. Hopefully some calmer seas too.”

On the flip side, the windy weather has been a boon for shore-bound anglers, with a number of large-size striped bass landed in recent days.

“There was a real good shot of bass into the 30-pound range for those fishing in the right spots,” said Paul Apostolides of Paulie’s Tackle in downtown Montauk. “The change in the weather made the difference, as the fish were very aggressive.”

To illustrate his point, Joe Judge weighed in a 34.2-pound bass on Saturday morning to take the lead in the wetsuit division of the Toad and Paulie’s One Shot Striped Bass Surf Tournament. No entries have been posted in the wader division, but Apostolides expects that won’t last long. “It’s nice to see some bigger fish show up,” he added. “I think we’ll see some even larger ones landed.”

It’s not too late to join the tournament. The entry fee is $25 and all weigh-ins take place at Paulie’s. The angler who catches the largest striped bass in the wader division will pocket a tidy $7,000, while the heaviest fish landed in the wetsuit category will come with a $3,000 prize. Note that only one fish over 30 pounds can be entered. If you catch a fish later in the season that’s larger, you are out of luck.

“The fall run is on,” proclaimed Harvey Bennett of the Tackle Shop in Amagansett. “Plenty of striped bass in the 15-to-20-pound range have been taken all along the beach from Hither Hills to Wainscott. The bay is also loaded with blues from three to six pounds from Gardiner’s Island, Napeague Harbor, Three Mile Harbor, and Accabonac.” Bennett reports that the porgy fishing remains strong and that blowfish, along with squid and mackerel, have been taken at the Navy Road dock in Fort Pond Bay in Montauk. Blowfish also remain in residence in Three Mile Harbor.

“False albacore have been good at Cherry Harbor, but the fishing has also been pretty good off of Montauk Point and along the southside too,” he added. “And don’t forget about blue-claw crabs. They’ve been really strong in all of the harbors and coves, including Lake Montauk.”

For those in the field, Bennett added that archery season for deer, as well as the shotgun season for woodcock are now open.