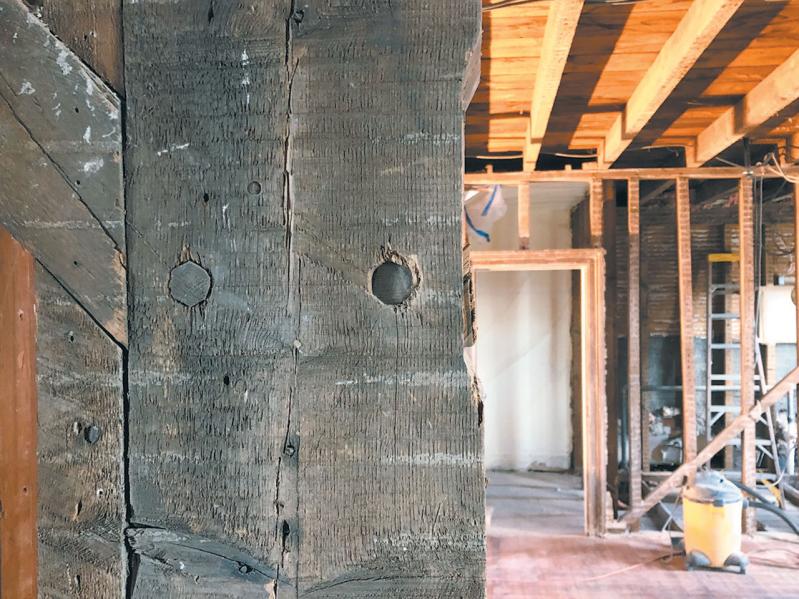 The gut renovation of the Montauk Lighthouse keeper’s quarters has revealed 100-plus-year-old construction details like this that some on the historical society’s lighthouse committee are loath to cover up.
Carissa Katz Photos
By Carissa Katz

As the Montauk Historical Society looks ahead to two big projects at the Montauk Lighthouse — the $24 million rebuilding of the revetment protecting it from the ocean’s ravages and a tower renovation that could start as early as next year — a more modest renovation underway now is offering a glimpse of parts of one lighthouse structure not seen for nearly a century.

Work on the keeper’s quarters, a two-bedroom apartment above the lighthouse museum, began in earnest when the museum and tower closed for the season after Columbus Day weekend.

“This is the first real opportunity we’ve had to get in there since the historical society took over the lighthouse in 1987,” said Joe Gaviola, the new keeper of the lighthouse. Marge Winski, the keeper for 31 years, left the post and the apartment it comes with this summer, giving the historical society a chance to assess and update the space without displacing a resident keeper. (Mr. Gaviola is living on-site in a trailer until renovations are complete.)

As happens with so many older buildings, one thing led to another and soon the space was down to its 1860 and 1912 studs, a mere shell, but one that highlights the craftsmanship and materials used when the quarters were first constructed, and how those had changed by the time an addition was put on in 1912.

Beneath the plaster and wallboard, the layers of linoleum and carpeting, the society found wood flooring dating to 1931 and two 1860 fireplaces that “hadn’t been exposed since God knows when,” Mr. Gaviola said excitedly during a walk-through earlier this month.

“It hadn’t been touched since 1962,” the last time the Coast Guard had done work on the apartment, he said. Even the appliances were from the 1960s. “But since our Gilmartin museum is directly below it with our priceless artifacts, we have had to bring it up to code with plumbing, heating, and definitely electrical.” Those systems, Mr. Gaviola said, were “jury-rigged” over more than a century, making it hard to even know their routing. The renovation will fix that and also address some oddities about the plumbing, electrical, and heating in the historical society offices that share the second-floor with the apartment.

“Everything has to be completely rewired so it can be underwritten,” said Mr. Gaviola, who serves on the lighthouse committee as director of finance.

“We didn’t plan on taking all the ceilings down . . . but what it has exposed are these glorious beams up here,” Mr. Gaviola said, pointing above him to the hefty 1860 floor joists. “The plan now is to leave those exposed and to wallboard or plaster in between them to try and keep this detail for viewing.”

The historical society’s lighthouse committee is grappling with the question of whether to restore the apartment to how it looked in the 1930s, when it got electricity along with modern heating and plumbing, or to stray from a strict historical renovation of the quarters and go instead for a reinterpretation that showcases the original workmanship.

“It’s a good discussion for us as a museum,” Mr. Gaviola said.

The brick fireplaces had been covered in plaster for nearly a century. Should the society cover them again to reflect the tastes and trends prevalent in an earlier period? Or should the brickwork be left exposed?

“As long as the debate continues, the less we do, the more we can do later,” said Dick White, chairman of the lighthouse committee. “Exposing the bricks now is not as permanent as covering them.”

Either way, the fireplaces will not be operational. The risks are too high, Mr. Gaviola said. “George Washington built the lighthouse. Joe Gaviola doesn’t want to be the one that burned it down.”

Structurally, nothing about the keeper’s quarters will change. Molding is being saved where possible, the cast-iron radiators will be reused, and the wood floor will be sanded and refinished. Bits of old hand-hewn posts and beams will be incorporated into the redone space.

“We’re going to save everything possible that is historic,” Mr. Gaviola said.

The finished product, however, will look quite a bit different from how it did when Ms. Winski lived there.

“We’re working with local contractors who have a love of the lighthouse, who have the technical expertise to handle something like this,” Mr. Gaviola said. While the dust involved in the fireplace work was still so thick that visitors had to wear masks on a tour earlier this month, it is hoped that the apartment will be done by next month or so.

The lighthouse, commissioned by George Washington in 1792, was completed in 1796. It is the oldest lighthouse in New York and the fourth oldest in the country. Its first resident keepers, civilians working for the Lighthouse Establishment — a precursor to the United States Lighthouse Service — lived elsewhere on the property. A keeper’s house was built in 1838, and the house attached to the tower was completed in 1860. A head keeper, two assistant keepers, and their families live there — the head keeper in a duplex-style residence and the assistants in apartments on the first and second floors.

“They were 20 miles away from the nearest town, and to negotiate that distance it was six hours one way with a horse and wagon,” said Henry Osmers, the lighthouse historian and author of several books about the light.

In 1912, the house was extended by 14 feet. It got electricity around 1938.
When workers took down the walls in the keeper’s apartment they found newspapers from 1939, matchbooks, and tobacco tins. A front-page headline on a Jan. 11, 1939, Daily News article reads, “Order to Gestapo Bares Near-Mutiny in Germany.”

“There were no real treasures,” Mr. Gaviola said. Nevertheless, Mr. Osmers will archive everything, and it will be kept in the historical society collection.

The Coast Guard took over lighthouse keeping in 1915, but the Army occupied the Montauk Lighthouse during World War II. The historical society it took over in 1987 and then purchased it from the federal government in 1994, “for a dollar and a dream,” Mr. Gaviola always says.

The lighthouse was designated a National Historic Landmark in 2012.
While the Coast Guard still maintains responsibility for the light and the fog signal as navigational aids, the nonprofit historical society is responsible for everything else.

The Army Corps of Engineers and the New York State Department of Environmental Conservation are picking up the tab for the revetment, but ultimately the historical society will be in charge of maintaining it. And the society will pay for the renovation of the tower atop which the light sits, where water seepage has made some of the bricks so brittle that “you cannot use traditional methods” to remove the old peeling paint and whitewash, Mr. White said. That work is expected to cost more than $1 million.

It is a hefty responsibility, but one that he said is a labor of love for everyone on the lighthouse committee.

A Conference for Young People to Create Solutions
Get Outside, Get Moving
Two Traditions, One Fair in Springs
END_OF_DOCUMENT_TOKEN_TO_BE_REPLACED