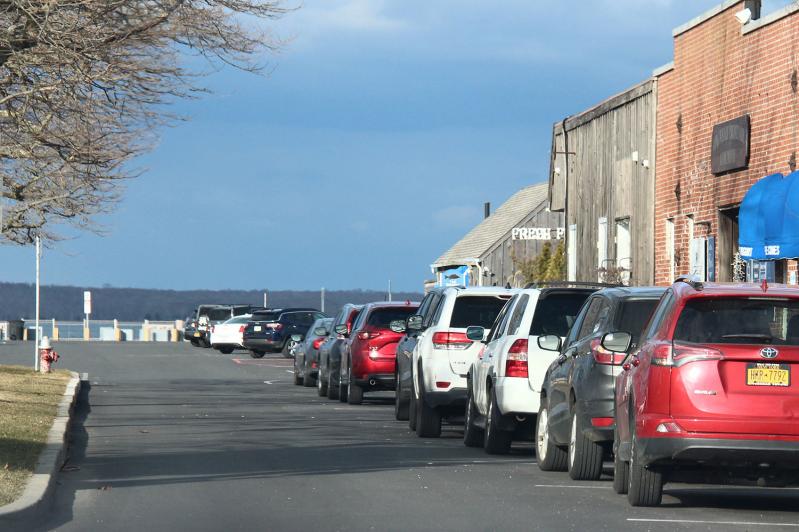 The Sag Harbor Village Board announced on Jan. 10 its intention to extend the village’s paid parking program for 2023. The board would like to extend the season by approximately six weeks, so it would run from May 1 until Nov. 30.

In 2022, Long Wharf was converted to paid parking from May 17 until Oct. 10. The board voted to hold a public hearing on the matter at the next meeting, on Feb. 14.

Mayor James Larocca said paid parking had generated $94,000 of income for the village in 2022. “A vast majority of the money is coming from our friends and visitors from out of town,” he said. The board used the money to “very excitedly and ambitiously . . . do some sidewalk work.”

The timing of that work was problematic for some village businesses, however, and he apologized. “There was some interference or disruption of the shopping environment,” he said, “but the contractor was available, and the clock was running.”

He said usually the village budgets only $30,000 a year for such work, which means they were able to do three years’ worth of repairs in short order. “We were able to accomplish a record number of repairs,” he said, on 6,300 square feet of “trip and fall areas” on the village’s sidewalks.

The village has extended its lease on the lot with National Grid for 2023, as it challenges the State Public Service Commission’s award of a 99-year lease to Adam Potter’s 11 Bridge Street L.L.C.

“We, as the municipal government, meet the highest test of public interest for the lot, which is the real standard that the Public Service Commission has to apply,” the mayor said. “That we would not engage to save 100 spaces and prevent it from going to a private, for-profit L.L.C. strikes me as a no-brainer.”

The public can comment on the fuss by visiting the Public Service Commission’s website and searching for case number 22-G-0699. Of 66 comments there, 43 of them, or 65 percent, wanted the village to control the lot.

Many of the comments that aligned with Mr. Potter’s plans for the village were less about parking and more in favor of the creation of affordable housing.

Relatedly, a letter submitted by Mr. Potter on Tuesday to the commission stated that the “parking lot lease is needed to provide parking for the first affordable/workforce housing development in Sag Harbor. . . . While Sag Harbor has a parking issue approximately two months a year, and mostly on summer weekends, the village and the surrounding area has a critical need for affordable/workforce housing 12 months a year.”

In other news, the village board voted to hold a public hearing on Feb. 14 regarding “pre-submission conferences” for large nonresidential building applications that come before it. In such cases, “the public could weigh in at the very first instance a larger application is submitted,” Mayor Larocca said. That would include any affordable housing proposal like Mr. Potter’s.

About That Fire Boat

On a philanthropic, completely uncontroversial note, Edward Burke Jr., attorney, presented the board with a check for $100,000 from his clients Jack and Cheryl Morris to be used in the purchase of a new fire boat for the village.

Tom Gardella, the deputy mayor, said a $250,000 state grant, originally intended to upgrade the kitchen at the Fire Department headquarters on Brick Kiln Road, had, with the help of Assemblyman Fred W. Thiele Jr., been repurposed for the fire boat. With other donations, the village now has about half a million dollars for the boat.

“We’re just finalizing specs with the chiefs and are going out to purchase the boat,” Mr. Gardella said.