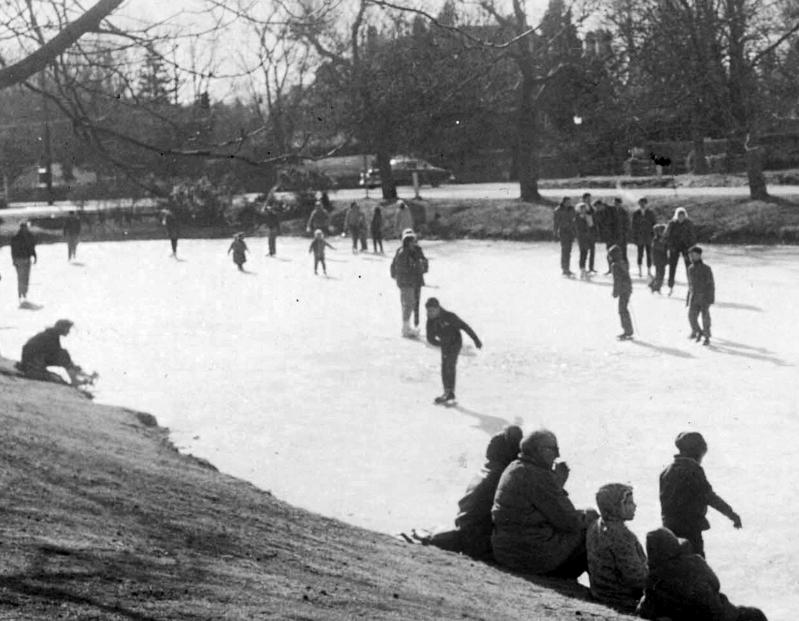 The people in this photo are skating on a frozen Town Pond in East Hampton. Children and adults alike sit on the hill and skate across the ice while wrapped in winter outerwear.

Town Pond has been a central part of Main Street since East Hampton’s founding, though originally it was more swamp than pond. In 1650, it was cleared out and shored up for use as a communal watering hole for the livestock that roamed nearby grassy areas. Town Pond is also called Goose Pond for the many geese, ducks, and swans that frequent the spot.

The photographer for this item, Eunice Telfer Juckett Meeker (1914-2000), worked as a high school teacher before becoming a freelance photographer, journalist, and travel writer. She briefly served as editor of The East Hampton Star, and still found time to volunteer with the Garden Club, the Ladies Village Improvement Society, the Ramblers, and for an English as a new language program.

The majority of the Long Island Collection’s East Hampton photos by Meeker were taken between 1954 and 1961, and this one appears to fall within that date range, judging from the skaters’ attire and the car in the distant background.

During most of this period, the average temperature in town was squarely below freezing throughout January, providing perfect conditions for every pond, stream, and kettle hole to freeze solid enough to bear a person’s weight.

One article published in The Star in 1955 lauds the Village Highway Department and the East Hampton Fire Department for scraping and flooding Town Pond for smoother skating.

While none of the people in this image are identified, the skaters remind us to look for the silver linings in extremely cold weather.