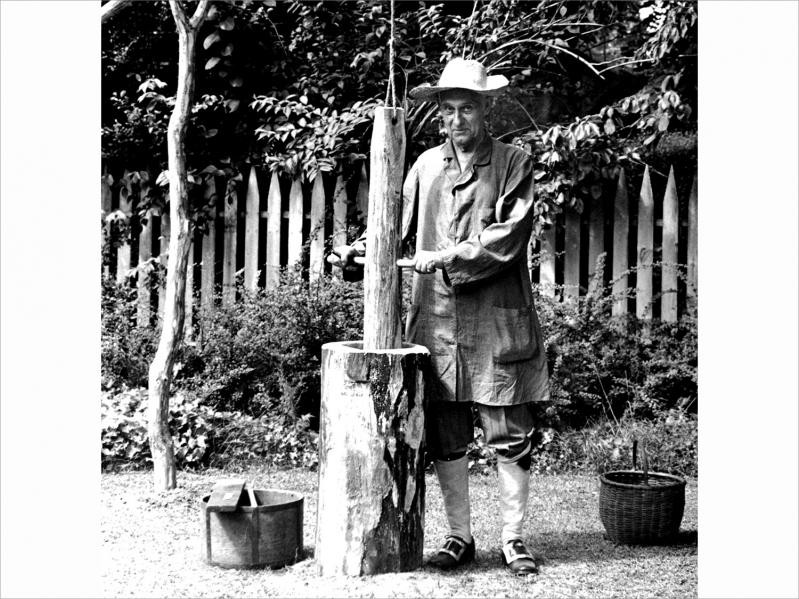 John Custis Lawrence (1867-1944), a Montauk-born architect, appears in this photograph participating in Forefathers’ Day, demonstrating how to grind corn to make samp, a mashed cornmeal porridge dish of Indigenous origin. The tool he uses operates similarly to a mortar and pestle but is designed to be slightly more efficient, with a levered pulley-like system.

Born at First House in Montauk, Lawrence lived in East Hampton and became a popular architect here, contributing to over 60 buildings in town, including many of the well-known summer colony estates. Examples of his work, including the estate he designed for Benjamin Franklin Evans, are now exhibited in the library’s front lobby display cases.

Forefathers’ Day began in 1940, and while this image is undated, it was taken by Marjorie Haffen, who took several photos that day in 1941, according to The East Hampton Star’s coverage of a Ramblers meeting in 1942. It is likely this is one of Haffen’s photographs from 1941 because The Star refers to her as taking pictures that year only. Furthermore, Forefathers’ Day appears to have been paused once the United States entered World War II.

Lawrence died in 1944, before East Hampton’s 300th anniversary celebration or the revival of Forefathers’ Day.

The day served as a predecessor to the Mulford Farm Festival, which returns this weekend. When the festival began in 1985, the two names were sometimes merged or jumbled in photographs. The early Forefathers’ Day events were mostly held at Clinton Academy, but a few also seem to have taken place at Mulford Farm.

This weekend the East Hampton Historical Society and Mulford Farm will again host a fall festival for families, building on the traditions of Mulford Farm Festivals and Forefathers’ Day. It takes place on Saturday from 10 a.m. to 2 p.m. As in years past, the festival will include demonstrations of historical tools and activities to engage and entertain children.

Andrea Meyer is a librarian, archivist, and the head of the East Hampton Library’s Long Island Collection.