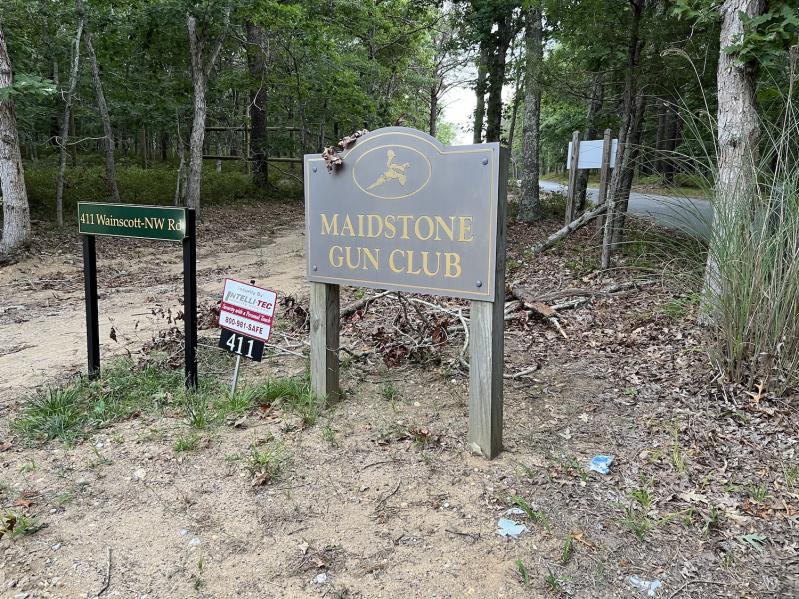 The gates are “often left open — as a matter of fact, on our way here they were wide open, we drove right into the gun club," a Merchants Path said at a town board meeting this week.
Christine Sampson
By Christopher Walsh

Two residents of Merchants Path in Wainscott told the East Hampton Town Board on Tuesday about multiple instances in which their houses were hit by bullets, for which they blamed the Maidstone Gun Club, about one mile away.

Roxana Pintilie told the board of a “really upsetting” incident on Aug. 5, and spoke of “bullets hitting our home in the sunroom, in the bedrooms” since occupying her house in 2004. The board has viewed a video of the Aug. 5 incident, which Councilwoman Sylvia Overby called “pretty scary” and Supervisor Peter Van Scoyoc called “disturbing.”

“We’ve had to put up with this for past 18 years, finding bullets into our home,” Ms. Pintilie said.

Lori Weinstein, also of Merchants Path, told the board that in December 2020, “I had found a bullet hole in the screen of my bedroom, which is in the back of my house, which is also in line with the gun club, and I found a bullet on the windowsill.” She said that she had taken the bullet to the East Hampton Town Police Department and filed a report. “If you go back in the police records, you’re going to find a number of reports of bullets hitting homes on Merchants Path over the years,” she said. “It’s our understanding” that the police are investigating the Aug. 5 incident at Ms. Pintilie’s residence, “and that the state police are also looking into this incident.”

Councilman David Lys said after the meeting that there is an active investigation regarding that incident. Walter Johnson, president of the Maidstone Gun Club, did not return a call for comment on Tuesday.

Ms. Weinstein charged that the security at the club is at best minimal. “No one’s overseeing what’s going on over there,” she said. The gates are “often left open — as a matter of fact, on our way here they were wide open, we drove right into the gun club.”

“I don’t have a gun,” she added, “[but] I could have taken out a gun and done whatever I wanted there.”

Ms. Pintilie agreed. “I go there every day to make sure that nobody’s shooting rifles,” she said. (The Star reported last month that the club’s rifle range has been closed indefinitely.) “I’ll be there every day from here on,” she added, “because there is no supervision, anybody can walk around and shoot whatever they want.”

The two also spoke of contamination from lead bullets and excessive noise from shooting. “We’re concerned about the contamination of our well water from all of the lead of all the bullets that are piling up at the range,” Ms. Weinstein said.

“This morning was the first time I’ve seen birds come back to the property,” Ms. Pintilie said, “because when guns are going on day and night, 365 days a year, you can’t hear the birds, the birds are running away. For the first time since they shut down the rifle range, the birds are coming back. It’s really, really upsetting. The value of our homes has gone to zero. We can’t rent, we can’t sell, and you know that the market has been amazing. There’s nothing we can do, because we’re not going to subject anybody else to this type of torture.”

The gun club’s lease of 97 acres of town-owned land, for which it pays $100 per year, expires on Oct. 31, 2023. Earlier this year, Mr. Johnson filed a notice of intent with the town clerk to renew the lease.

In August and again this month, several members of the Wainscott Citizens Advisory Committee voiced similar concerns about the club’s operation, including environmental damage, noise pollution, and lease terms that one called “laughable, a gift of public land to individual citizens.” Some asked that the club either be closed and the land repurposed or, at minimum, that a new lease reflect present market conditions and include “clear and enforced regulations” as to noise and pollution.

“We would like to see it gone,” Ms. Pintilie told the board on Tuesday. “I hope that you guys will not sign that lease again.”