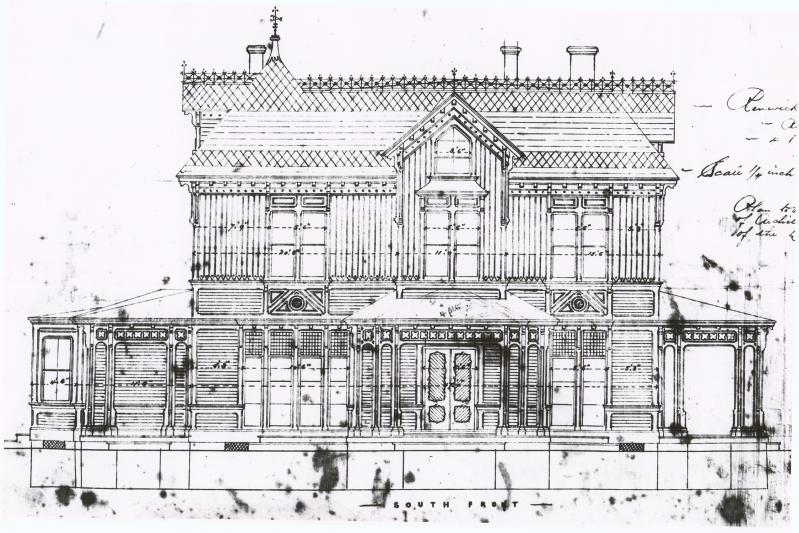 This drawing is for the Frederic Gallatin House, designed in 1877 and constructed by 1878. It was considered one of the grandest "Stick Style" houses in East Hampton. Gallatin, who lived from 1841 to 1927, hired James Renwick Jr. (1818-1895), a prominent New York City architect best known for designing St. Patrick's Cathedral on Fifth Avenue and the Smithsonian Castle in Washington, D.C., to come up with a summer home for his family.

The architectural drawing here features Stick Style elements of asymmetry, wooden details, and decorative millwork used as gingerbread trim along the edge of the porch roof. At least one of the house's rooflines features the steeply pitched gable typical of the Stick Style.

The house has a side bay window, a feature popular in the Stick Style, and its wooden clapboards show sections with "stickwork" (a term for the decorative layering of boards) in both horizontal and vertical directions. It had overhanging eaves and a strong Gothic influence, seen in its castle-like tower.

The Long Island Collection has additional blueprints and measured drawings for the house as part of the Parsons Electric Collection.

Frederic Gallatin's New York Times obituary identified him as the grandson of Albert Gallatin (1761-1849), secretary of the Treasury. Frederic appears in census records and on his children's birth certificates as a lawyer, but his family had strong ties to New York's financial world for generations. He played an active role in East Hampton's evolution, frequently offering financial backing for community services like the Neighborhood House and donating the land in Springs that is now Maidstone Park.

Across the street on Ocean Avenue, James Gallatin Jr., Frederic's brother, would later build his own summer cottage, which, unlike the Frederic Gallatin House, still stands.

Mashashimuet Park's History and Future
A Conference for Young People to Create Solutions
Get Outside, Get Moving
END_OF_DOCUMENT_TOKEN_TO_BE_REPLACED