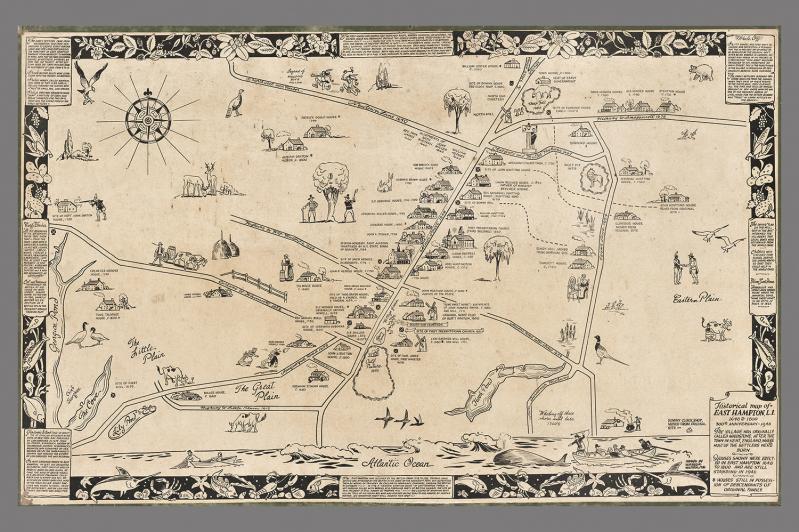 Warren Whipple (1910-2003), a renowned cartoonist and former art teacher here, created this map for the 1948 East Hampton tercentenary celebrations. At the cardinal and secondary points of the map, Whipple included images and stories providing us with an impression of East Hampton in 1648, but also the East Hampton of 1948.

The map depicts houses, cemeteries, and mills lining Main Street, following a path still used today and bookended with common pasture grounds. In the style of 17th-century maps, Whipple added illustrations of native animals. Many of those shown remain today, such as ospreys, rabbits, and deer; others are no longer here, like the bear and the wolf. He also included images of daily life, such as women churning butter and operating a spinning wheel, and visuals of local lore.

Illustrations appear in two distinct styles, suggesting that different artists contributed drawings, although only one artist is identified. Perhaps Whipple intentionally drew the legends in a different, more cartoon-like style to convey their unproven nature, although this theory does not explain the cartoonish cows grazing around the page.

The change in styles is particularly notable in one depiction of two Indigenous men in which a caricature references the Whooping Boys Hollow legend. This offensive illustration is unacceptable today, but it speaks to the attitudes of 1948. Another piece of illustrated folklore is the Pudding Hill incident, showing a “stirring dame” tossing a berry pudding in a startled British soldier’s face.

This map was a small piece of the extensive festivities held for the Town of East Hampton’s 300th anniversary, which included a townwide parade along Main Street featuring dozens of floats, bands, riders, and re-enactments of local history. Participants marched all the way down Main Street, following a route dating back to the 1600s.

Mashashimuet Park's History and Future
A Conference for Young People to Create Solutions
Get Outside, Get Moving
END_OF_DOCUMENT_TOKEN_TO_BE_REPLACED