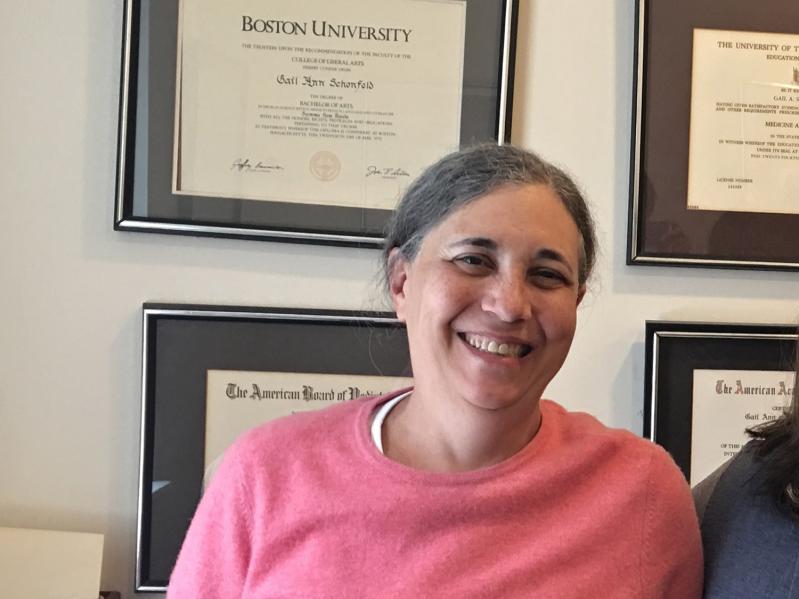 “I met a woman, Emma Bellows, a family practice physician who was in her 70s when I arrived 40 years ago. She started practicing here in 1915 or somewhere around there and she was the first female physician in the Hamptons,” recalled Dr. Gail Schonfeld, the East Hampton pediatrician who founded East End Pediatrics in 1982. Over a recent phone call, she reminisced about her four decades of serving the community, and having seen it all, from advancements in medicine and technology to one of the greatest health epidemics in history.

Dr. Bellows, her trailblazing predecessor on the East End, wrote “Memoirs of a Town and Country Doctor,” which Dr. Schonfeld read. “It was eye-opening as to what did not exist when she worked out here and how different it was to practice without all of the things that we now have. There were no antibiotics, there was no oxygen, there were no intravenous fluids. There wasn’t much of anything. So, it was much harder to try and save lives with no tools. And so, while there’s lots and lots that we have a valid right to complain about these days, at least we have those tools and we can be successful in what we do. So, I can look at the things that make life difficult and be angry and frustrated and resentful. Or, I can look at how much more I have to offer and how much more I can accomplish, and be grateful for that,” she said.

When she arrived in East Hampton in 1982, she said it would be another five years before the influenza type b vaccine (Hib) was licensed. The vaccine, not the same as the flu shot, is usually administered to protect children under 5 from illnesses such as diphtheria, whooping cough, and polio. So, the doctor said, “We would see meningitis. We would see epiglottitis. I had to spinal tap everybody. I used to get up in the middle of the night — night after night — to see kids with croup to make sure it wasn’t epiglottitis and that they wouldn’t be dead by morning,” she said, with the type of eyebrow-raising bluntness that some parents of children in her practice have become accustomed to, while others have not.

On Healthgrades, an online resource that provides information and consumer ratings of hospitals and health care providers, Dr. Schonfeld garners either one star ratings (poor) or five stars (the best), and nothing in between. The reviews shared by clients range starkly from, “Would leave 0 stars if possible,” to “the entire team at East End Pediatrics was incredibly thoughtful and supportive in their approach to practicing medicine.”

Whatever her bedside manner, her focus on the health and well-being of children in her care cannot be disputed. Over the years she has pioneered need-based community programs on the East End to help families access “dental and mental” care. Dental came first, in the early 2000s, through her nonprofit, the Pediatric Dental Fund of the Hamptons. She helped raise awareness of East End families who could not afford dental care, as well as raise money to help pay local pediatric dentists to provide necessary treatment for children from those families.

Then, in 2013, Dr. Schonfeld opened the South Oaks Child and Adolescent Center of East Hampton, a satellite clinic offering mental health care out of donated office space inside the East Hampton Healthcare Center on Pantigo Place, where her practice is also located. According to the website, East End Pediatrics was “awarded the designation of National Committee for Quality Assurance (NCQA) Patient-Centered Medical Home, Level 3, the highest level attainable. This award was given in recognition of our efforts to integrate and coordinate care between specialists, mental health and dental providers, hospitals, emergency rooms, and your child’s school.”

She is clearly passionate about tackling the widely reported fact that depression, self-harm, and suicide are on the rise among American adolescents. “I was trained to recognize and treat infection. I am now retraining myself to recognize and treat mental healthfulness. It used to be that we went from crisis to crisis, dealing with injuries, accidents, illnesses, and urgent emergency situations that arose every day. Most of that is preventable these days.

So, now we can really focus on growth and development, and mental health. Making children into healthy adults,” she said during the phone call.

Following her residency, she was hired to work on the East End because there was no pediatric practice in the community. Then: “The community grew, so the practice grew itself. I made absolutely no effort whatsoever to try and recruit patients. I have always had more patients than I am capable of handling,” she added.

However, no amount of practice or training could have prepared her for the outbreak of Covid-19 in 2020. While she had long been accustomed to the seasonal influx of children and parents in the Hamptons, the pandemic meant an almost overnight surge in patients, as families from everywhere chose to quarantine here. In an American Academy of Pediatrics blog, she detailed how her practice found ways to deal by staggering appointments, conducting wellness visits in the mornings only, and seeing sick children in the afternoons. As a result, she had to rent additional office space in the complex to efficiently distance visitors. But, telemedicine, she noted, was a lifesaver for many during the pandemic.

Her predecessor, Dr. Bellows, lived through the influenza epidemic of 1918 — unfathomable to Dr. Schonfeld, who said that dealing with a pandemic on the East End even in the 1980s would have been a challenge. “I’m doing P.C.R. testing in the office every day. There was no such thing as a P.C.R. in 1982,” she said.

At 67, the doctor is far from ready to hang up her stethoscope for good. Besides, East End Pediatrics, with three busy doctors on staff, is an essential part of the East Hampton community. “I think there are a few more years to come,” she said.

Mashashimuet Park's History and Future
A Conference for Young People to Create Solutions
Get Outside, Get Moving
END_OF_DOCUMENT_TOKEN_TO_BE_REPLACED