Volunteers are needed, no experience necessary 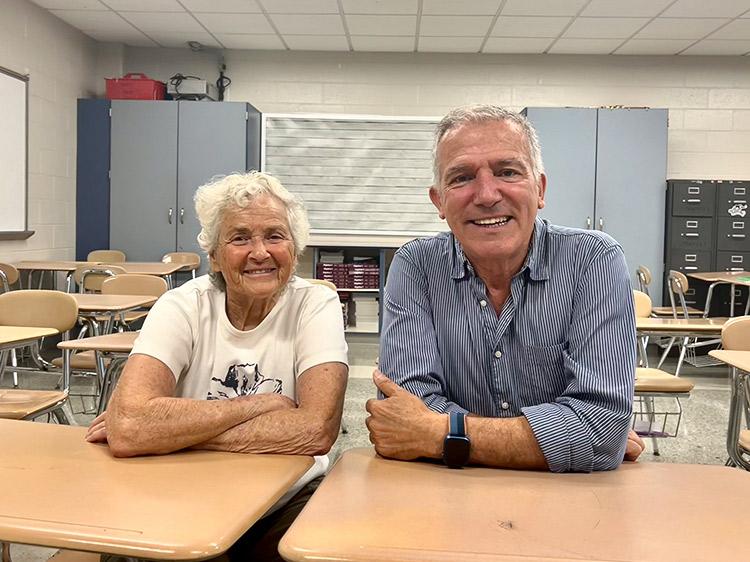 Louise Bergerson and Andrew Visconti, who, along with a group of volunteers, lead the reinvented Ruta 27, an English as a second language school for adults, visited a classroom at East Hampton High School where weekly evening classes will begin in September.
Judy D’Mello
By Judy D’Mello

“They are our gardeners, roofers, my manicurist, restaurant and deli staff, and I wanted to help them,” said Leslie Schnur, a Northwest Woods resident and former publishing industry executive who volunteers as a teacher of English as a second language. “Learning to converse is a big part of the program, and I want students to know that it’s okay to make mistakes. So I always tell them that their English is a whole lot better than my Spanish — which is absolutely true.”

Ms. Schnur is one of about 15 volunteers, mostly retirees — a science teacher, an Italian journalist, a packaging-business owner, an attorney, a nurse, a house cleaner, and others — for Ruta 27 (Route 27), an E.S.L. program for adults. Beginning in September, the program will hold its classes at East Hampton High School, every Thursday from 7 to 9 p.m.

“We are our own entity now. We changed our name, we changed our outfit, we changed our location. We have a new website. New everything!” said a visibly excited Louise Bergerson, the program’s co-director. An Amagansett resident, she retired in 2014 after a 35-year career as a science teacher and then a dean.

Like Ms. Bergerson and almost all the volunteers, Ruta 27 also had a previous life. It was called Aprendiendo Ingles Ahora when Ms. Bergerson co-founded it in 2014 with Adriana Leon, an East Hampton resident who had been in her employ for about 15 years. They offered weekly volunteer-led E.S.L. classes in the Living Water Christian Gospel Church in Wainscott to about 50 Latino adults, at $120 for the entire academic year. By 2018, the school had swelled to capacity — about 120 students — and the organization moved to St. Luke’s Episcopal Church in East Hampton.

Each year, however, there were about 40 prospective students on the waitlist, who could not be accommodated because of space limitations.

“It was very sad to tell them that we had no spots available,” said Ms. Leon, on the phone from Ecuador. The directors began thinking about ways to expand, and also about creating a more clearly defined entity that wasn’t associated with a religious center.

Ms. Bergerson ran the idea of rebranding, relocating, and renaming Aprendiendo Ingles Ahora — a tongue twister, she admitted — by her colleagues. Ruta 27 was born, and it received its official 501(c)(3) status in February.

Andrew Visconti, an East End-based, Italian-born journalist, began volunteering for Ms. Bergerson after reading a 2017 article about Aprendiendo Ingles Ahora in The Star. He still teaches today, and also serves as the organization’s chief financial officer.

Mr. Visconti approached Adam Fine, superintendent of the East Hampton School District, about the possibility of holding the E.S.L. classes at the high school, one evening a week. The superintendent agreed on the spot, Mr. Visconti said on Monday, seated in an empty high school classroom with Ms. Bergerson. They were ecstatic about the prospect of having giant whiteboards at their disposal and ample seating in each classroom. Mr. Fine offered the space free of charge (the school normally rents out its classrooms), except for a refundable $200 security deposit in case of damage.

“I think providing a venue for the program makes sense on a number of levels, but most importantly by providing a service to our Spanish-speaking community. The classes are well attended and highly desired — so for us to help the program in any way makes sense,” Mr. Fine told The Star in an email.

The biggest challenge facing Ruta 27 is that its growth is limited by the number of volunteer teachers. “With our current 15 or so teachers, we can only add another 20 to 30 students,” explained Ms. Bergerson. They’ve added an additional level this fall as well, for a total of seven levels of language proficiency ranging from basic to fluent. Recruiting new teaching staff is crucial.

Many potential volunteers may worry about working with non-English speakers because they themselves speak only English. But Robert Charney, who has volunteered with the organization for five years and is not a Spanish speaker, said it hasn’t affected his teaching in the least.

Amy Kanengiser, a retired attorney who lives full time in East Hampton, joined Ruta 27 in 2019 after voicing reservations about possible language difficulties. “I was worried I would need special training to be an E.S.L. teacher,” she recalled. “But you don’t, because there’s always a bilingual helper or teacher in the classroom to help out.”

Latinos make up 23 percent of the East End population, according to the 2021 U.S. census. About 1 in 10 of the approximately 50 million foreign-born U.S. residents 16 and older speak English “less than very well” or not at all, according to census figures from the same year.

Ms. Leon, who arrived from Ecuador 25 years ago, recalled the difficulties she faced as she tried to communicate with her children’s teachers and in her day-to-day life. “I told Ms. Louise all those years ago, that one of the most important things she could do for this community is to help people learn English. I am very, very happy that we are growing now and able to serve more people.”

Ms. Schnur totally agreed. “Language is so empowering. And teaching someone how to speak to a doctor, a boss, or a child’s teacher, or how to pass a driving test, or a citizenship test — it’s freeing for them. It opens up the world.”

Registration for the E.S.L. classes will open on Aug. 2. Classes run from September to May. For those who apply before Aug. 20, the cost is $180 a year; $200 thereafter. The annual fee covers all textbooks, pens, and other supplies.

More information, including registration, and be found at ruta27.org.

Mashashimuet Park's History and Future
A Conference for Young People to Create Solutions
Get Outside, Get Moving
END_OF_DOCUMENT_TOKEN_TO_BE_REPLACED