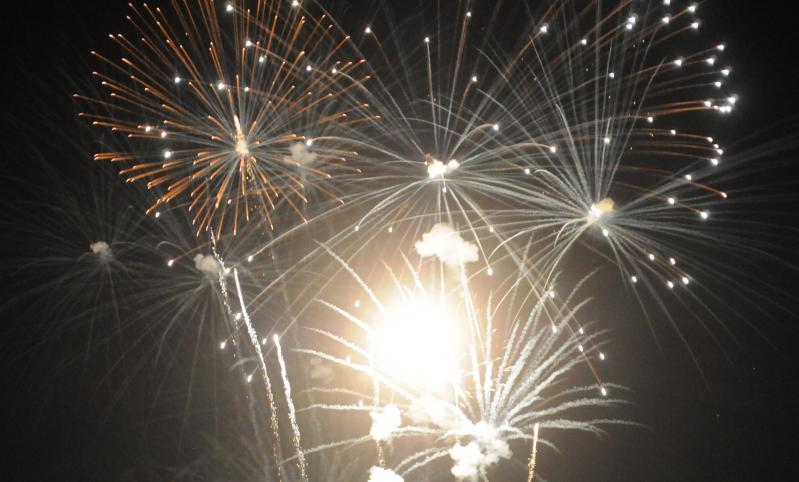 East Hampton Village Fire Chief Duane Forrester has a message for would-be Independence Day celebrants with a sackful of illicit fireworks at the ready: “Leave the fireworks to the professionals, so everyone can have a safe and happy Fourth of July.”

True, true — and there are plenty of fireworks shows coming up over the holiday weekend and through the summer to enjoy the rockets’ red glare without, you know, losing your thumb to an M-80.

The Greenport Fire Department offers its annual festival of pyrotechnics on the Friday night of Fourth of July weekend at the Polo Grounds, located off Route 25 on Moore Lane. The fireworks get going at 10 p.m. and are a highlight of the department’s annual fund-raising carnival, which runs through July 3.

The 35th annual Southampton Fresh Air Home fund-raiser features Grucci fireworks launched from a barge in Shinnecock Bay. (The beneficiary  is a camp for children with disabilities.) Along with fireworks, the event offers all-American picnic fare, live music, and other fun stuff — stilt walkers, magicians — with tickets running from $175 for young’uns, $250 for ages 21-30, and $350 for everyone else. It starts at 7 p.m. at 1030 Meadow Lane; the fireworks kick off at 9:15. There’s prime viewing along Meadow Lane for those who can’t swing the ticket.

Head to Little Albert’s Beach in Amagansett, or any other Gardiner’s Bay beach, for a prime viewing spot (but please leave the dog(s) at home, it’s not a fun time for pooches), when the Devon Yacht Club sets off its annual blockbuster show from 9:30 p.m. to 11:30 p.m. The weatherman called for thunderstorms on the show's original night of July 2, so it will take place instead on its rain date, July 3.

The Sag Harbor Yacht Club, 27 Bay Street, lights up the sky from 9:30 p.m. to 11:30 p.m. with its annual John A. Ward Independence Day Fireworks show. Ward was a popular Sag Harbor mayor, fire chief, and veteran, who died in 2012 at the age of 90. Head to Havens Beach, the Long Wharf, or Marine Park for choice viewing opportunities.

Each year the Westhampton Country Club puts on a Grucci show at its 35 Potunk Lane compound. While the club is closed to hoi polloi, there are no bad seats in Westhampton for this popular event, whose fuse is lighted at 9 p.m. The Great Lawn is an especially prime location. Rain date’s the Fourth.

The Orient Harbor Independence Day celebration in Southold features the de rigueur Grucci rockets and kicks off at 9:15, with a rain date set for July 16. Organizers are asking for donations to keep this Orient tradition going.

At last Independence Day has arrived, and along with it, the East End epic of friendly explosions otherwise known as Stars Over Montauk. Hosted by the world-famous Grucci family of fine fireworks products (and the Montauk Chamber of Commerce), the show’s at Umbrella Beach, just west of downtown, and can be viewed from pretty much anywhere in the hamlet (well, not from a barstool at the Shagwong). The Viking Classic is offering a cruise to Fort Pond Bay to check out the show, which kicks off at 9 p.m. The boat leaves its slip at 8 p.m. and returns at 11 p.m.; tix are $100 for adults and $50 for the under-12 set.

Who says fireworks are just for the Fourth? Well, nobody. Fireworks are awesome any time of the year! Shelter Island’s Crescent Beach fireworks show is at 9 p.m.

Another day, another Grucci blowout. The Three Mile Harbor fireworks extravaganza — a.k.a. the Great Bonac Fireworks Show — is co-hosted by the nonprofit Clamshell Foundation, and kicks off at 42 Gann Road at 9:30 p.m. The show fizzles out with a bang at 11:30 p.m. The event raises money for the foundation, which pays for local student scholarships and other child-friendly community outreach. Prime viewing spots include Sammy’s Beach and the beach at the end of Gann Road.

This isn’t just a fireworks show — it’s the high point of the annual Sag Harbor Firemen’s Carnival to benefit local firefighters, with the pyro popping off on Havens Beach. The carnival runs from Aug. 2 to Aug. 6, nightly from 5 to 10, and features all sorts of rides, foods, and “the best New York City-style food vendors.” Yum.

The very popular and well-attended East Hampton Fire Department fireworks show, held over Main Beach in East Hampton, kicks off at 9 p.m., deep in the dog days of late summer. Chief Forrester’s July Fourth call for caution remains in place — here’s to leaving it to the pros to provide a summer’s worth of oohs and aahs.

Note: This story has been updated to indicate the new date of the Devon Yacht Club's fireworks show.