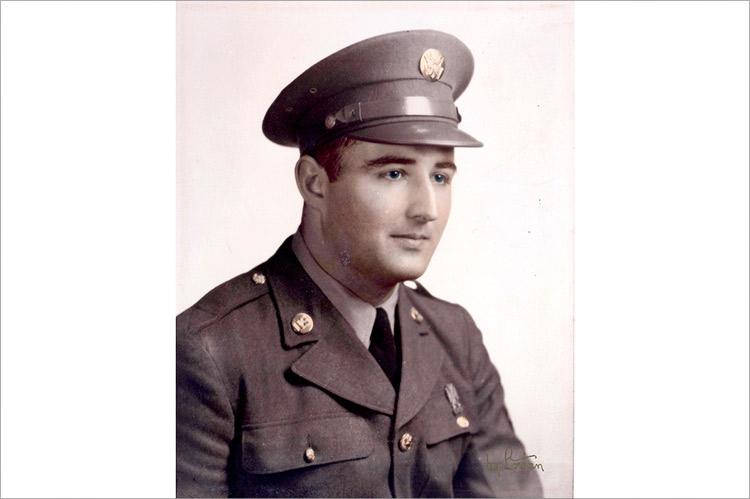 In honor of the June 23rd birthday of Alan Turing, the “father of modern computer science,” this week features a portrait of Thomas L. Collins (1921-2011), East Hampton’s own code-breaking computer specialist. Collins escorted the United States’ most advanced cryptology device to the Allied cryptology center at Bletchley Park, England, using it to decrypt Nazi messages.

How did a local guy from Springs become involved with code breaking? It started with Collins’s job before the war in New York City, installing and adding to telephone exchanges for Western Electric. The company’s relay equipment made up a key part of the machine he later operated.

Collins first trained at Long Island’s Camp Upton before continuing to New Jersey for signal training, then on to a signal training battalion at Arlington Hall in Virginia. He began working on Madam X, a code-breaking machine he helped install, maintain, and repair. Madam X, like many early computers, was “as big as a house,” and the security was so strict, cleaning staff couldn’t even enter the building.

In September 1944, Collins was sent on a mission to take “top secret” equipment from Chicago to Virginia by train. This was America’s best code-breaking machine, the Dragon. Collins tested the Dragon in Virginia before taking it on Oct. 1, 1944, to Bletchley Park. He reassembled the Dragon and began decoding Nazi communications by Oct. 20 of that year, personally decrypting 143 messages.

Collins’s commanding officers wrote that he was “extremely popular” among “officers and men” at the end of his posting.

After the war, Collins returned home, working for Western Electric for over 40 years. He married Anne E. Miller and they raised three sons. His role was so secret that his family never knew about it until the 1990s, when his son recognized his father’s unit, the 6813 Signal Service Detachment, and his nickname, “Sam Scram,” while reading about World War II.

Collins was later honored by both the American and British governments for his service.