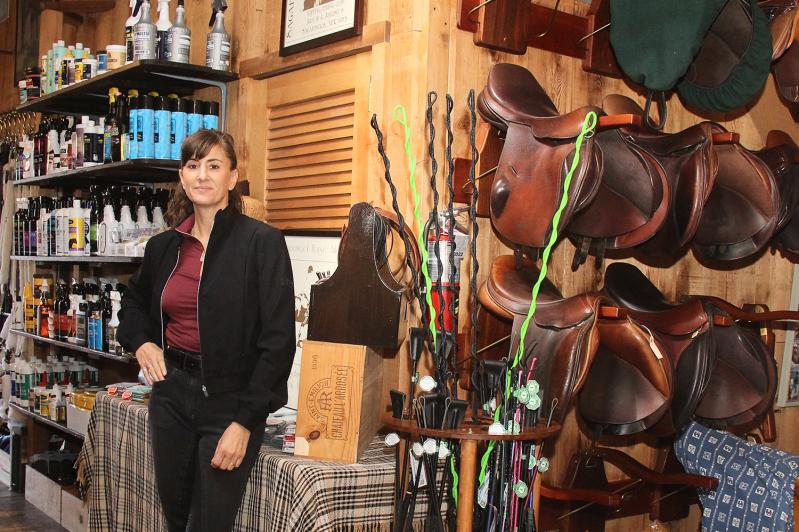 Natalie Mattson, the owner of Brennan’s Bit and Bridle in Bridgehampton, tries to be sure that her shop has something for people at a range of prices while also supplying grooms, trainers, and riders with whatever they may need.
Durell Godfrey
By Isabel Carmichael

It wasn’t just bread baking or pet ownership that Covid refugees turned to once they had alighted here during the pandemic. Many also embraced horseback riding, observed Natalie Mattson, who owns Brennan’s Bit and Bridle in the Bridgehampton Commons.

“Even though I would say that most people do not build a barn to keep horses out here anymore, a lot of people of all ages either started riding from scratch or came back to riding during Covid,” Ms. Mattson said. As the owner of a store that supplies grooms, trainers, and riders with whatever they may need, that suits her just fine. The only thing is that there are just not enough horses to go round, she said. “Most barns have to limit what they can offer new customers because they do not have enough horses available. So many customers come in and talk about how hard it is to find the right horse to buy or lease.”

Ms. Mattson, unlike anyone on either side of her family, grew up with a passion for horses and, after dreaming about having her own horse for years, bought a palomino quarterhorse she shared with her sister. He lived at her family’s barn on Cedar Street in East Hampton, where she grew up. Ms. Mattson rode her bike to Stony Hill Stables every weekend when she was 12 to muck out stalls and clean tack in exchange for one lesson a week, with Wick Hotchkiss, and she rode in her first show there.

All through high school, winter and summer, she took trail rides out for Rita Foster on the beach in Montauk, a dream job that allowed her to be on a horse for eight hours a day. Once she was done with high school, Ms. Mattson worked as a groom at the Topping Riding Club in Sagaponack, owned by Anne and Emily Aspinall. While she was working there, between 1993 and 1995, she was offered a job at Brennan’s Bit and Bridle, which Ms. Aspinall had bought from Richie and Diana Brennan in 1987. The Brennans had started the business in 1975 for their daughters, Dawn and Debby, riders as little girls.

In 2005, when she was only 31, Ms. Mattson bought the business from Ms. Aspinall, thereby uniting her two life passions: riding and fashion. She has been riding with her trainer, Rebecca Robin Wilson, for 12 years now, at Stacy Ludlow’s barn in Bridgehampton, but entered her first show in dressage only last year, and has been competing recently at Caumsett State Park in Lloyd Harbor.

She has kept the inventory pretty much the same, she said, although she, along with her assistant, Megan McCaffrey, likes to make certain that anyone can come in and buy something: “We make sure we are including everybody in our buying” so as to make riding accessible to more locals, she said. When Diane O’Donnell, her mother, would take her there as a child, most of the items were beyond their financial reach. She and Ms. McCaffrey also try to buy things that are handmade at businesses owned by women. And they often help guide new riders and their parents in choosing their apparel.

“In Europe it’s a male-dominated sport; here it’s more female-dominated,” even though the store carries things for men, too. Brennan’s outfits the young lead riders at the Hampton Classic and also gives them goody bags every year.

Before, when riding was mainly an English thing, the clothing required was made of wool. Riding fashion has all changed now and stretchier fabric, which wicks sweat away from the body to the surface of the material where it dries quickly, is the norm.

The store also has two master saddlers on staff and carries custom-made tack and apparel, including horse blankets, saddles, boots, belts, and halters. Seems that even though the English leather stitched in India is labeled “hand-stitched,” it is actually stitched on machines. And sometimes it is not just vanity that drives ordering custom-made boots, for instance, but the fact that someone’s legs are different sizes. The gloves the shop sells are popular even with nonriders.

When the pandemic first hit, “We thought, is this the end of the shop?” Ms. Mattson said. Apparently not, and, she added, “There are fewer and fewer small businesses out here what with rents so high and so much online shopping, so every year ticked off always feels like a celebration.”