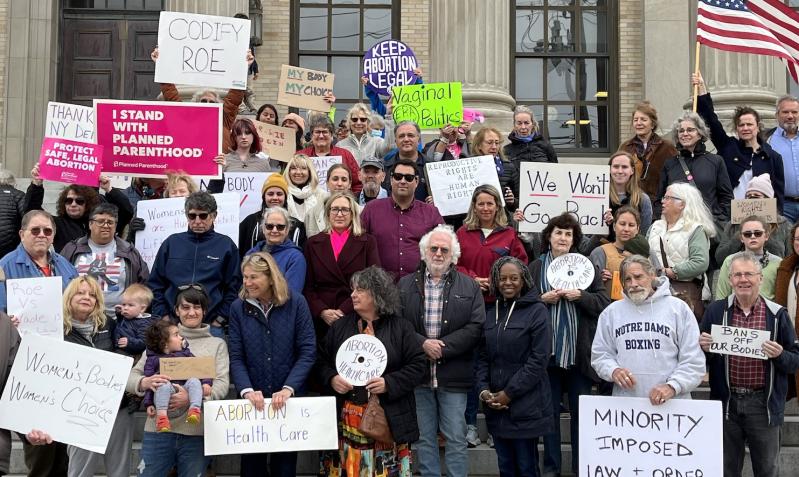 Dozens of East Enders rallied on the steps of the Suffolk County Supreme Court in Riverhead last week in support of Roe v. Wade, the landmark 1973 decision that has protected abortion rights for nearly 50 years.
Bridget Fleming Campaign
By Christine Sampson

After the news broke that the United States Supreme Court, in a leaked draft of a decision, is poised to overturn the landmark case Roe v. Wade, several community organizations came together to organize a rally in support of abortion rights in Riverhead on Saturday.

This regional event is part of a larger campaign called Bans Off Our Bodies, for which similar rallies will take place in New York City and across the nation. In Riverhead, it will begin at noon on the steps of the Suffolk County Supreme Court.

For nearly 50 years, Roe v. Wade has protected women's rights to access abortion. While that ruling still stands at present, many experts are saying the Supreme Court's conservative majority appears to have already made up its mind.

Rebecca Dolber, a co-founder of the East End Action Network, said in a recent interview that she was appalled to hear of the likely reversal of the Roe decision, but not surprised.

"I think abortion is central to the civil rights of women, and it's as simple as that," Ms. Dolber said. "Anyone paying attention, reading the tea leaves, if you will, knew this was just a matter of time."

Free Car Seat Checks in Southampton
Battle of the Books, and More Fun for Teens
This Week's Happenings in Montauk
END_OF_DOCUMENT_TOKEN_TO_BE_REPLACED