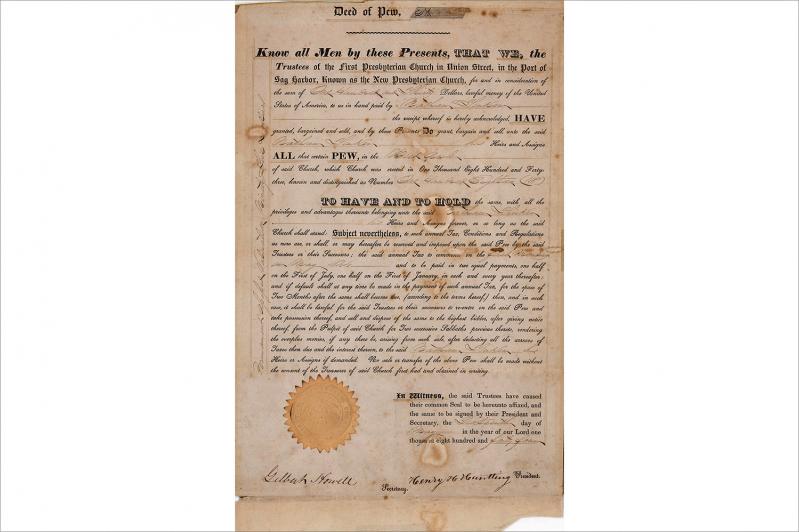 In the 18th and 19th centuries, churches here allowed parishioners to rent or buy pews, often charging more for those closest to the pulpit. The money helped in church maintenance. Pew deeds or titles could be passed down to heirs as families grew, but during the 20th century the practice disappeared.

This document, belonging to Sag Harbor's First Presbyterian Church, shows a pew deed recognizing payments by Nathan Tinker from May 16, 1844. Tinker bought pew number 118 in the west aisle for $130. This sum is equivalent to about $4,917 today.

Born in Connecticut on Sept. 30, 1792, to Nathan Tinker and the former Mehetable Beckwith, he married Hannah P. Woodward (1791-1852) on Sept. 27, 1818, in Sag Harbor, according to the records of the Old Whalers Church. Tinker was a skilled furniture maker who specialized in cabinets. In 1825, he built his shop in the bustling seaport, on the site where James Howell (1731-1808) ran an inn during the Revolutionary War period.

Tinker's cabinet shop burned down during a fierce fire that swept through Sag Harbor in 1845. He rebuilt a brick structure, which he planned to split into two dwellings to be shared with his son, Samuel W. Tinker (1820-1862). Samuel followed his father's profession, as he is listed as a cabinetmaker in the 1850 census.