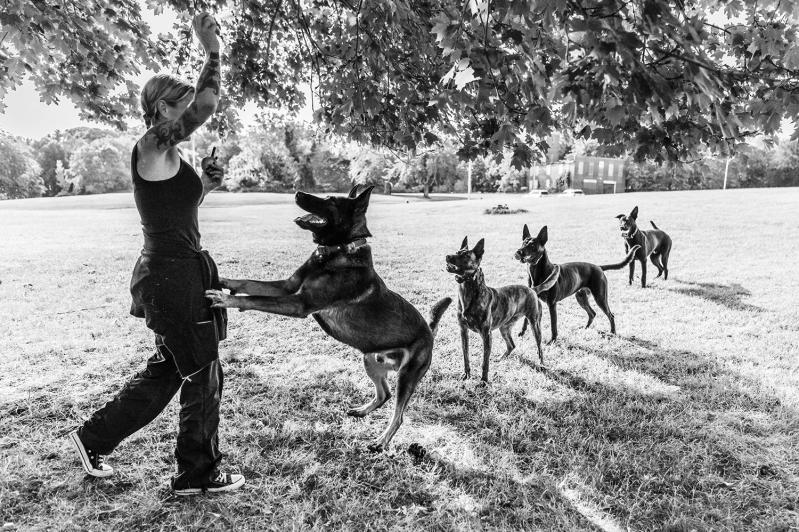 Which dog will be the first to get the ball Kelly Brach is about to throw? Enzo, in front, Sonja, Maggie, or Dino, with the folded-over ear?
E. Beth Thomas
By Isabel Carmichael

In February, when a 5-month-old puppy went missing at Edward V. Ecker Sr. County Park in Montauk, it seemed as if every pet lover in the hamlet was on the case. In the end, however, it was Kelly Brach and two of her trained tracking dogs that reunited the missing dog, Lucy, with her family.

Lucy, a Lagotto Romagnolo puppy who looks a bit like a Wheaten terrier, broke away from her dog walker to follow a jogger, and crisscrossed the Long Island Rail Road tracks several times. Her desperate owners, Leigh-Ann and Matthew Hess, called Ms. Brach right away, and the next morning she and her team were on the case. She took Enzo, her Czech shepherd, and Sonja, her Dutch shepherd, with her, letting them pull the runaway’s scent off her blankets or toys.

Lucy was missing for six days before being found, and the search was, at times, harrowing.

The railroad tracks run close to the park (pet owners call it the Montauk dog park), and at one point Ms. Brach and Enzo were almost hit by a train. Mr. Hess, who was with them, felt the tracks vibrate as the train was rounding a blind turn, and shouted, “Train!” Ms. Brach grabbed Enzo and jumped back, covering his ears.

Lost dogs will often venture onto railroad tracks because no one chases them there, Ms. Brach explained, but they aren’t familiar with train noise and get hit fairly often. Sadly, another dog that was with its owner, looking for Lucy, was struck by a train and died.

The weather during the six days Lucy was lost was wet and freezing. Ms. Brach worked about nine hours on the first day’s search, but determined that the dog was running and pulled back. A later attempt to lure Lucy with food and her owners’ scents on well-worn T-shirts, failed.

On the sixth day, she worked another eight-plus hours. Lucy was finally found and contained on a pier near where she had first run away from her walker. One of the owners was able to grab her leash, which had stayed attached throughout the puppy’s ordeal.

It might seem that winter would be the worst time to lose an animal, but Ms. Brach said that if it were her own pet, she would rather it be in winter. “Dehydration and heat stroke are not risks the way they are in the summer,” she noted. Also, she said, excessive heat kills scent faster than cold. “Snow packs the scent down, and any bit of moisture exaggerates it and strengthens dogs’ sense of smell.”

Moist cold, without too much wind, is the ideal tracking condition, she said. Wind “knocks the scent around.” When it starts warming up, though, the frantic calls start coming. February is slow, Ms. Brach said, because both people and dogs stay home.

Ms. Brach’s life before she began working with tracking dogs was nothing like it is now. Ten years ago, she managed technicians for high-end race cars on Long Island and in Manhattan. She drove a Porsche and got to try out new models, even racing a few herself.

Then Tony, one of her two indoor-outdoor cats, failed to come home when called. She scoured the neighborhood, called veterinarians and the police, left posts on social media, and wrote a letter to her local paper. During the three weeks the cat was missing there were three northeasters.

Finally, a woman on a neighborhood app suggested she find a lost-pet tracking dog that had been imprinted on animal scent (unlike police dogs, which are trained to sniff out bombs and drugs). A woman who had such a dog was unavailable but told Ms. Brach to use dirty cat litter from her other cat, Frankie, Tony’s litter mate, to create a wide circle around her house, with the house at the center.

Cats are smarter and more resourceful than dogs and not as dependent, Ms. Brach said. “You never read about cats running down the parkway, the way dogs do.” (They’re also good at hiding; she often finds them stuck in sheds.) Tony had got himself locked in a basement about eight houses away from hers. When she made the kitty litter trail, the cat smelled it, and was trashing the basement trying to get out. When the homeowner went to check out the noise, Tony ran out and straight back to where he belonged.

For Ms. Brach, this was a turning point. “There was no reason people should be aimlessly wandering about looking for their pets.” She decided to move, and bought a house in Kings Park in Smithtown, “because it is centrally located on Long Island,” along with two dogs that had been trained to track. Each was 2 years old, mature, fully trained, and ready to work.

She has four dogs now, but only three are working animals. In addition to Enzo and Sonja, who weigh in at 75 and 65 pounds respectively, there’s 70-pound Maggie, offspring of Sonja and a visiting bomb-scent-trained Belgian Malinois. One-year-old, 110-pound Dino, son of Maggie and Enzo, is “more of a play dog,” at least for now. “Dino spends my money while the others make my money.”

Ms. Brach is one of relatively few people in the country doing this kind of work, which is both physically demanding and not particularly well paid. Her youthful training as a dancer helped prepared her for the workouts. She runs with her dogs every day; afterward, they are fed a pound each of cooked steak.

“Dogs are like people,” she said. “We all have our ways we do things. One will sit, one will lie down, one will make quick eye contact . . . some pick up a paw, some bark. That’s why it’s so important to do maintenance work. The dog handler and the dog need to learn each other’s language.”