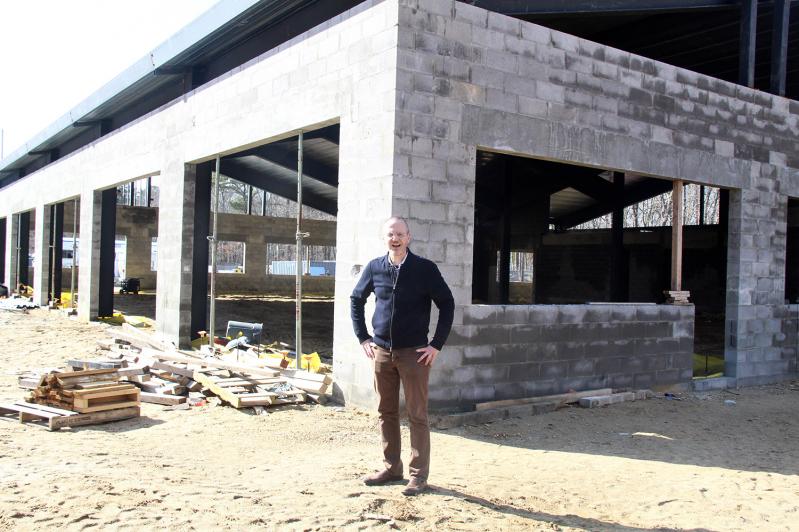 Eleven months after a public groundbreaking ceremony and eight months after the actual breaking of ground, substantial progress has been made on “Forever Home,” a significant re-envisioning and renovation of the Animal Rescue Fund of the Hamptons campus in Wainscott.

Scott Howe, ARF’s chief executive officer, said on Friday that the state-of-the-art rescue, adoption, and 8,400-square-foot, year-round training facility and sanctuary should be largely completed by year’s end. The renovated campus will feature 40 kennels, multiple outdoor exercise areas, space for a pet-food pantry, and a retail and lobby area.

ARF was founded in 1974, and its headquarters have not seen physical improvements in 20 years. Richard Bacon, of Bacon Group Architecture, is the new facility’s designer. Mr. Bacon has expertise in design for animal-care facilities and is “fear-free certified,” having completed the Fear Free Certification Program, an online course that helps veterinary professionals eliminate anxiety and stress in their animal charges.

“A lot of it is about sound, and also privacy,” Mr. Howe said of design for a stress-free environment. Individual bays in the dog kennel will be constructed with a special glazed-ceramic brick, he said, compatible with a high-pressure washing system. The bay doors will have a solid component at the bottom that dogs can hide behind, “so they can curl up and feel safe,” a wire mesh component “where we can pass them treats when we come through,” and tempered glass above to attenuate sound. “There’s a super-high-density noise-reducing insulation in the roof, and then another layer of noise-canceling acoustic tiles,” he said.

ARF’s catteries and kitten room are also being renovated and will include custom-built features for climbing and play. The new campus will double its capacity for cats, “which is not because we want more,” Mr. Howe said. “We want to spread them out.” There will be three new rooms in the medical wing especially for surrendered cats, whose owners have died or are transitioning from one residence to another. “It’s a much more chill environment.”

The rebuilt ARF campus is “also designed to accommodate, now, the thousands of adopters who come to ARF every year,” Mr. Howe said. “The last time the building was renovated, adoptions were around 500 a year. We’ve doubled and tripled that.” To that end, the campus will feature five new meet-and-greet rooms for potential adopters.

The new facility will also see an upgrade to a campus-wide nitrogen-reducing septic system and to the heating, ventilation, and air-conditioning system, which will feature UV filtration. Previously, “the kennels had no air-conditioning,” Mr. Howe said. “Bad for the animals, bad for the staff. Now, there’s full heat and air-conditioning, and, campus-wide, 100 percent fresh air. There’s no recycled air in the kennels, in the catteries, even in the office spaces. The air is pumped out and fresh air is coming in throughout the day.”

During the renovation, ARF continues to house around 50 cats and dogs, or about one-third of its capacity, and to conduct rescues and adoptions. “It was really important for us to stay operational,” Mr. Howe said.

“We’re still raising money” for the $13-million construction project, he said. “When we broke ground, the project was about 85 percent funded.” Fund-raising for ongoing operations will also continue, and donations can be made at arfhamptons.org. “That’s the hardest part for any nonprofit,” Mr. Howe said. “You build it, then you have to keep it up. It will be a much cleaner, nicer, safer place for everybody. It’s going to be a great place for the community.”

ARF will host an auction and cocktail party on May 28 from 6 to 8 p.m. at the ARF Thrift and Treasure Shop in Sagaponack. The event will celebrate the launch of a two-week online auction, from May 28 to June 11, featuring furniture and decorative items donated by longstanding friends and adopters, including noted designers, artisans, and dealers. Proceeds will benefit the animals at the adoption center. Advance tickets are $200, or $225 at the door. Tickets and bidding can be found at give.arfhamptons.org/arfauction.

A Conference for Young People to Create Solutions
Get Outside, Get Moving
Two Traditions, One Fair in Springs
END_OF_DOCUMENT_TOKEN_TO_BE_REPLACED