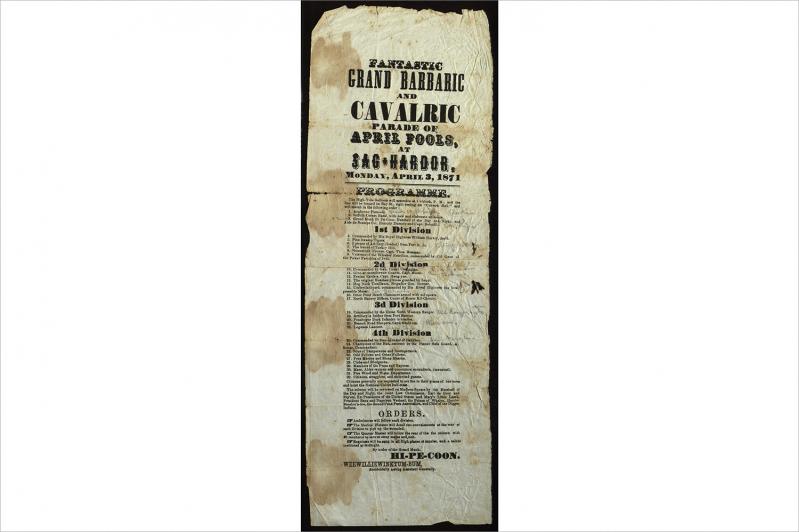 April Fools’ Day may be an unofficial holiday traditionally observed with pranks, jokes, and hoaxes every April 1, but this broadside for the “Fantastic, Grand Barbaric, and Cavalric Parade of April Fools” came from a Sag Harbor parade marking the occasion on April 3, 1871. The notice provided the parade’s procession order, which included many participants and groups making joking references to local organizations, landmarks, and popular culture of the time.

The Sag Harbor Express reported three days later that the parade had been organized and advertised by the Enigma Club, a Sag Harbor social club for unmarried white males, founded in 1869. The parade formed on Bay Street and marched up Main Street as far as Madison, mimicking a traditional parade route through downtown. Several of the leading characters were played by unidentified locals, who dressed as and imitated political figures and military officials, including Ely S. Parker (1828-1895), a Native American commissioner of Indian Affairs under President Ulysses Grant, New York City Mayor Abraham Oakey Hall (1826-1898), a Suffolk County Republican officer, and a former New York legislator in costume as the Devil.

Caricature choices in the parade also reflected the changing nature of Sag Harbor, which had recently seen the collapse of the whaling industry and the arrival of a Long Island Rail Road station, connecting the village to New York City and Gilded Age machine politics.

Two minor unfortunate incidents clouded the day’s festivities. Edward H. Cooper, whose father was the whaleboat builder William H. Cooper, fell from his horse and badly cut his head during a stampede “scrub” race at the end of the parade. And one of the ponies involved in the race belonging to John M. Hildreth (1837-1908) broke its leg.