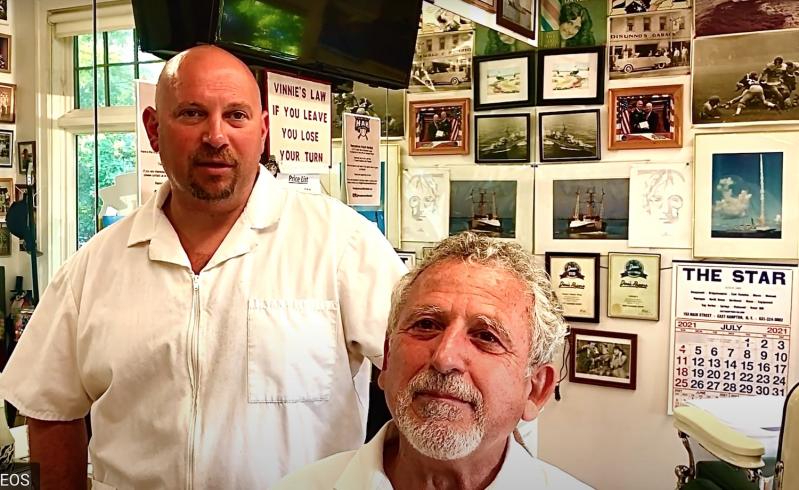 Vinnie and Nick Mazzeo, a father-and-son duo who run a barbershop in Amagansett, are among the people interviewed for the East Hampton Library's new video series on life during the pandemic.
East Hampton Library
By Christopher Walsh

The East Hampton Library has made news in recent months for its efforts to preserve and promote evidence of the town’s storied past. In November, it unveiled a new website for its Long Island Collection, featuring an interactive experience with any of 23 collections, including historical records, a local artist research archive, high school yearbooks, and multiple archives of museums, churches, and photographs.

Weeks later, the library announced a collaboration with LTV to preserve and make freely available noteworthy content in the LTV archive of more than 22,000 programs, depicting more than a century of East Hampton’s history, from a 1915 Fourth of July parade to programs from the studio’s almost 40-year history.

Now, the library is offering a new video series, this one documenting current historical events as they unfold, namely the once-in-a-century, one hopes, event that has transformed life in the town and across the globe. “Covid Hamptons: How the Pandemic Reshaped an Iconic Community” is a series documenting the impact of the Covid-19 pandemic on the town from the perspective of residents and employees. An initial batch of 14 videos, mostly five to eight minutes long, was recently supplemented by six more, with more to be added weekly.

Each video focuses on the firsthand account of an individual filmed at his or her workplace, and each subject discusses the experience of weathering the pandemic, the impact on work and personal life, what has changed, and what has been learned. The videos are at easthamptonlibrary.org/videos.

Andrew Visconti, a journalist, filmed and produced the videos. To date, more than 80 interviews have been filmed, and they will be added to the site as they are edited.

“We missed that embrace on Sunday morning,” Mr. Thompson said of his congregation’s experience. “We missed smiling and looking at one another’s face, and the expressions that manifest themselves as a result of fellowshipping together and coming together, hugging one another, expressing our love and appreciation and excitement to see one another again after being away all week. But we couldn’t do that.”

“How do we make sense of what seems to be a tragedy and a crisis,” he asked, “not only in our community but also in our nation?”

Early in the pandemic, Mr. Verdugo said, ambulance personnel were afraid when a call was for a resident who was ill with Covid-19 infection. “We didn’t know how to react at that point.” Members of the ambulance association contracted the virus, he said, though none suffered severe illness.

One day in mid-March of 2020 was “a normal, slow day,” Mr. Franey said. “The next day it felt like July 4, the business of July 4 just hit us.” Cars filled with families and their possessions were arriving en masse, he said. “You could tell people were coming here to stay. The shelves were empty.”

Many of these late-winter arrivals were working from home. “A lot of dads were at home with their wives and kids. They were coming in at 5 and 6 o’clock looking for something. . . . It was a hard time for everyone. I think a glass or two of wine or a cocktail at night was nice for them to relax with.”

The series “provides a historic snapshot of this unique time in East Hampton history — capturing the moment we changed as a community and how we reacted to this historic worldwide event,” Mr. Visconti, who also teaches memoir-writing workshops at the library, said in a statement.” ‘Covid Hamptons’ illuminates our shared stories of struggle and resilience, hope and humanity.”