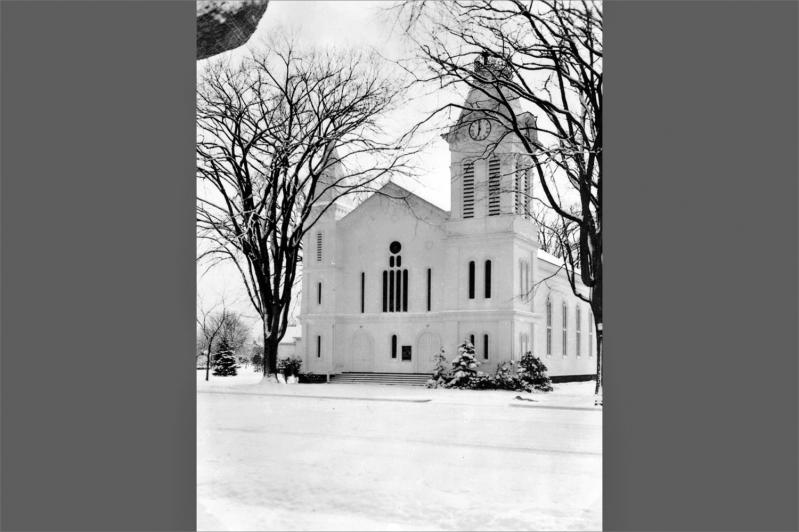 This photograph, taken by Leonard L. Lester, shows the East Hampton Presbyterian Church covered in a thick blanket of snow. There’s no date, but the photo technology clearly indicates that it was taken after 1920, most likely between 1930 and 1960, when a remodeling was started.

Organized in 1648, the Presbyterian Church was the first religious community here. Before a church building existed, the congregation met in a tavern run by Thomas Baker until 1651, when a log church was built in the South End Burying Ground. In 1717, under the leadership of the Rev. Nathaniel Huntting, a proper church was built near where Guild Hall is today. It featured a New England-style meetinghouse construction and remained in use until 1861.

In 1860, Huntting’s great-grandson James Madison Huntting bought the land where the church now stands for $1,500 from his cousin Deacon David Huntting. James got together the $13,500 needed to build a new church building, which was finished debt-free in 1861.

The church rested on two huge posts made of an entire white oak tree. Construction involved a combination of handmade nails and wooden pegs, and followed something of a Romanesque Revival style, featuring two steeples in a European tradition.

Between 1960 and 1961, a renovation was undertaken to transform the old building into the present-day church, with a single 108-foot steeple. Four columns measuring 25 feet high and weighing 600 pounds were added to the front. Efforts were made to reuse some of the original wood from the 1861 structure.

Today, the 1961 renovation is still visible on Main Street, and many of the Presbyterian Church’s historical records are part of the Long Island Collection’s holdings.