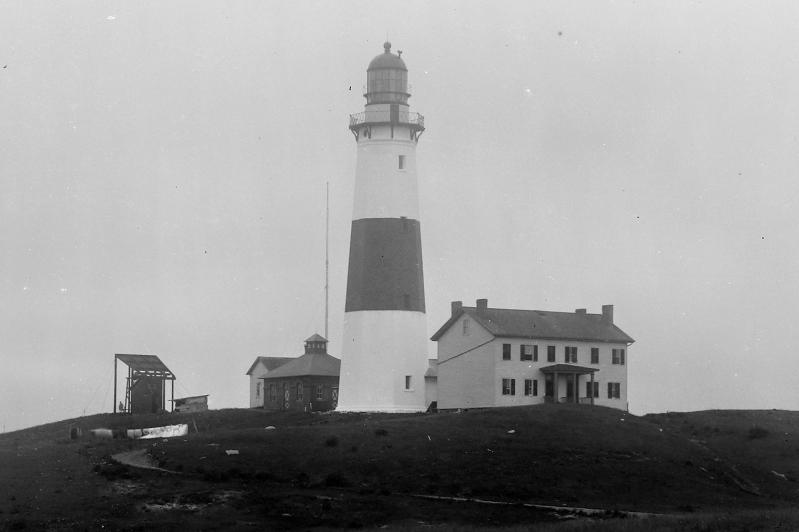 Recently scanned from a glass-plate negative in The East Hampton Star’s photo archive, this highly detailed image of the Montauk Point Lighthouse was probably taken near today’s upper parking lot. Such negatives were a type of early film that made use of a fragile pane of glass. The practice was discontinued by the 1920s.

Despite their fragility, glass-plate negatives often produce exceptionally good images. This one is so detailed and well preserved that even lines of rope can be seen, along with the collars of at least a week’s worth of dress shirts drying on a clothesline. A man appears on the crest of the hill to the left, just beyond the wooden structure and not far from the laundry. Similarly detailed is the railing around the catwalk circling the Lighthouse’s beacon.

While this photo is undated, what it shows allows us to narrow the date range to a few years, rather than the decades when glass-plate negatives were used.

Isaac Van Scoy captured previous images of the Montauk Lighthouse between 1860 and 1880, seemingly before the addition of the brick barn, constructed in 1869. In Robert Hefner’s “Montauk Point Light Station, 1838 Keeper’s Dwelling,” a historical structure report, there are images of the Lighthouse from 1884 and 1903. The radio tower faintly visible behind the brick barn in the undated image above appears entirely different in 1903, when that photo shows it in a different location and reaching much higher, stretching beyond the Lighthouse’s beacon.

Henry Osmers, the Montauk Lighthouse historian, also noted that the structure seen here has a daymark, or striped band, in the middle, which was added in 1899. Mr. Hefner pointed out that a fog signal can be seen on the Lighthouse, and it was added in 1900. Most likely this image was taken between 1900 and 1903, before the construction of the taller signal tower.

Andrea Meyer, a librarian and archivist, is the head of collection for the East Hampton Library’s Long Island Collection.