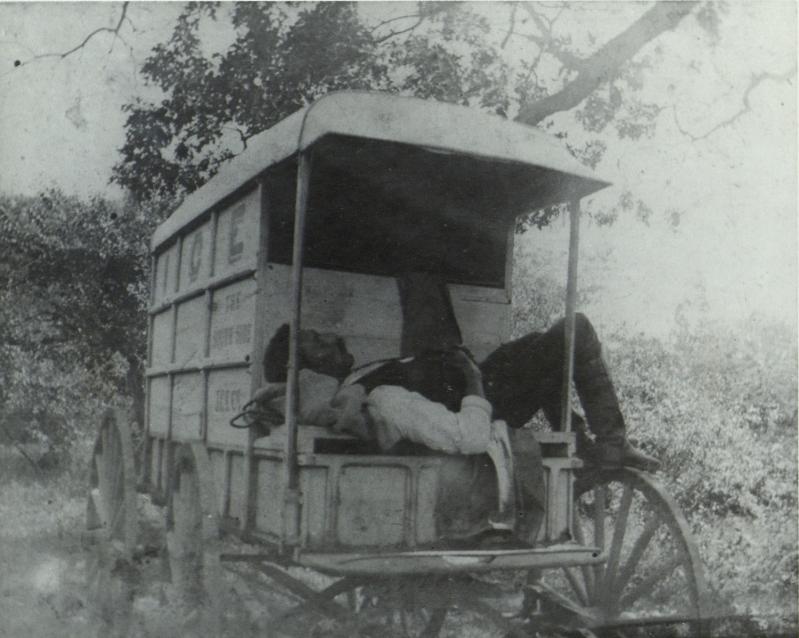 In this photo, Christopher Cuffee (1862-1939) takes a break and reclines under his delivery wagon's canopy to protect himself from the heat of a summer day. The Cuffees were a prominent clan of the Montauk people, and Christopher grew up on Liberty Street in Sag Harbor. His parents were Louisa Cotton Cuffee (1817-1906), a Narragansett with Shinnecock heritage, and Jason Cuffee (1819-1872), who was from the Eastville branch of the Montauks and well known as a whaler.

Christopher went on to become a tribal council member within the Eastville Montauks, a position of honor and responsibility. He married Harriett (Hattie) Van Houton (1866-1917), who also came from Sag Harbor.

The 1900 census identifies him as a day laborer, and this photo indicates that he worked for the South Side Ice Company. Before refrigeration, the ice industry used wagons to deliver ice saved from the winter to homes and restaurants around town. Ice blocks were large and heavy; it was difficult work.

Sometime between 1900 and 1910, Christopher and Hattie moved with their two children across Long Island Sound to Hartford, Conn., where Hattie died in 1917. Christopher remained a Hartford resident for the rest of his life, but his son, Christopher Jr., returned to Sag Harbor and lived in the house he inherited from his grandparents on Liberty Street. Christopher Sr. visited his children on Long Island many times before his death in 1939.

This photograph came from a collection created and described by a man known as Red Thunder Cloud, a controversial figure who self-identified as a Catawba, although this claim is no longer believed to be accurate. Despite the controversy surrounding him, the photos he collected offer important stories of many native peoples on the South Fork.

Moriah Moore is a librarian and archivist in the East Hampton Library's Long Island Collection.