For Wainscott Chapel, a modern amenity at last 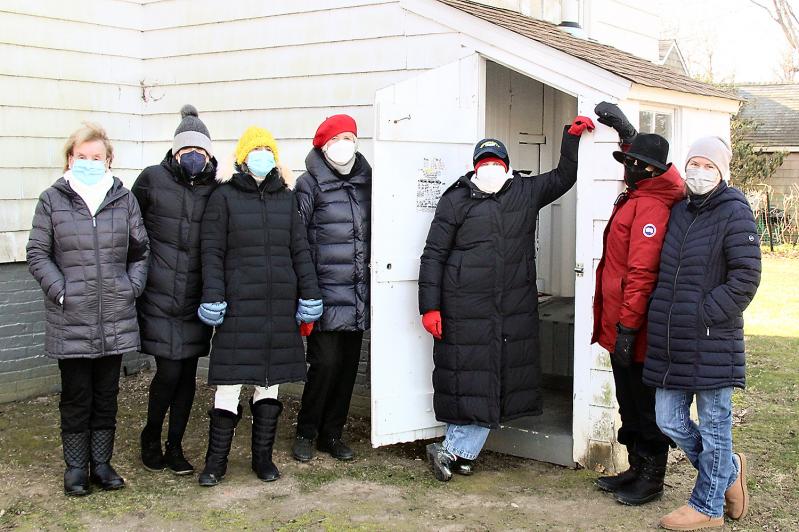 The women of the Wainscott Sewing Society say “out with the outhouse” at the Wainscott Chapel, which is finally set to have a proper bathroom with plumbing.
Durell Godfrey
By Christopher Gangemi

“We’ve been a community center since 1908 and have never had a proper bathroom,” said Hilary Osborn Malecki, president of the Wainscott Sewing Society.

“Well, we’ve had a bathroom,” said Barbara D’Andrea, treasurer of the society. “We just didn’t have a flush toilet.”

“The outhouse is not heated,” she continued, “so in the winter it’s rather cool in there.”

That’s right — the old chapel on Wainscott Main Street, maintained by the 152-year-old Wainscott Sewing Society and widely used by residents of the hamlet as a community center and event venue, still has a functional outhouse, perhaps the last one on the East End.

According to Joe Zaykowski, a local historian, many outhouses here were long ago converted to garden sheds. The last privy to be used as a bathroom, he said, was at Federico’s Superette in Sag Harbor, where Harbor Market and Kitchen now stands.

Sylvester Manor, on Shelter Island, has an outhouse that dates back to 1737 but it is no longer operational. “It would have been very cold to use in the winter and hot and smelly in the summer,” said Donnamarie Barnes, director of history and heritage at the Manor.

The sewing society presented a plan to the East Hampton Town Planning Board in October to abandon the existing “septic system” and to install an innovative/alternative on-site wastewater treatment system, a bathroom, A.D.A.-compliant access, and two parking spaces.

While the board looked kindly on the application, Eric Shantz, the town’s senior planner, said a public hearing was required before it could go through, because the Suffolk County Health Department must also approve it. That hearing was held yesterday. If all went well, after a long process of approvals, reviews, grants, and even affidavits, the era of the outhouse at the Wainscott Chapel will have come to an end.

“People think it’s a church,” Ms. Osborn Malecki said of the chapel. “But it was actually a school, in Bridgehampton.” The building went up for auction in 1907, she said, and the citizens of Wainscott outbid the citizens of Bridgehampton, who were going to use it for a firehouse. It was dragged along Montauk Highway and across potato fields by a team of horses, and has sat on Wainscott Main Street ever since.

“It is the only place where the community can gather indoors,” said Carolyn Logan Gluck, president of the Wainscott Citizens Advisory Committee.

Originally, the Wainscott Sewing Society was created as a benevolent organization. Back in the second half of the 1800s, if a mother died, “fathers would ship the kids off to orphanages, because they had to work,” said Ms. Osborn Malecki. The women would sew clothes for the orphans and “pack up barrels to send to the orphanages in New York City.”

Besides the sewing, they were involved with community projects and cooking. They would meet every Wednesday at the chapel, and their husbands, mostly farmers working the nearby fields, would come for lunch, as would their children. “Our annual lunch for the kids at the Wainscott School is our nod to that,” said Ms. Osborn Malecki. The society also put a fence up around the Wainscott Cemetery.

During World War I, the society was very busy. “They rolled bandages,” said Ms. D’Andrea. The chapel itself was used as an emergency-alert system. “When the bell rang, you were supposed to put your lights out,” said Ms. Osborn Malecki. “When it rang again, you could turn them back on.”

Over the years the women continued to meet, but the need for hand-sewn goods diminished. “Now,” said Ms. Osborn Malecki, “our main goal is to maintain the chapel as a community center. We want to keep it kind of the same. But this can’t keep being a community center if we don’t bring it into modern times.”

Back in the ‘70s or even the ‘80s, the existence of an outhouse wasn’t that big a deal. “The outhouse wasn’t that far removed from what they probably knew growing up,” said Ms. Osborn Malecki, speaking of her grandmother and great-grandmother, both members of the sewing society. But now, she said, “It’s getting to the point that [an outhouse] is just not acceptable. People find it shocking.”

“We’d try to rent [the chapel] out for a wedding,” she said. “First, grandma can’t get up the front stairs. Then we tell them there’s no bathroom, and grandma is going to have to go down two sets of staircases into this disgusting outhouse.”

In addition to being a hazard for grandma, the outhouse was also not handicapped accessible.

They decided to fix the situation.

To paint, to add air-conditioning, to fix the bonnet (“a constant source of leaks”),  to make the building A.D.A. accessible — all while maintaining its historical quality — required money. How could they raise money if they couldn’t rent it?

Ironically, even though they’ve made shortcakes with billionaires, the women needed to fund-raise. “Dues are currently $10 a year,” said Ms. D’Andrea, “and I raised it from $1 because they said that wasn’t worth the bookkeeping.”

“The dues are more symbolic than anything else,” explained Pat D’Andrea, secretary of the society and Barbara’s cousin.

But you can’t build a bathroom in the Hamptons with symbolic money.

Some money came in from the society’s annual rummage sale and a bit more from the strawberry festival. “We served 232 bowls this year before we ran out of berries,” said Barbara D’Andrea. “It would have taken us about 50 years of rummage sales” to pay for the bathroom.

Happily, out of nowhere, a “local anonymous benefactor” stepped up and funded the entire cost of the bathroom, about $100,000. On top of that, the Friends of Georgica Pond have given the society a $5,000 grant toward the septic system, and Michael Hemmer has donated his surveying services.

“That would have been a lot of strawberries,” said Pat D’Andrea.

“Having A.D.A. accessibility as well as proper facilities surely will make the chapel all the more attractive to those who seek to hold a special event there,” said Ms. Gluck.

“This is a huge goal,” said Ms. Osborn Malecki. “We’ve been around since 1869, and we have nothing but time. If it takes another hundred years, we’re going to start now and move forward. We’ll keep going as long as it takes.”

At one point, in order to get county approval for the septic system, the society was required to prove that they’d had a kitchen prior to 1981.

“Thankfully, Barbara found minutes dating back to 1930 in her attic,” said Ms. Osborn Malecki. “Don’t mess with the women of the Wainscott Sewing Society,” she added, laughing.