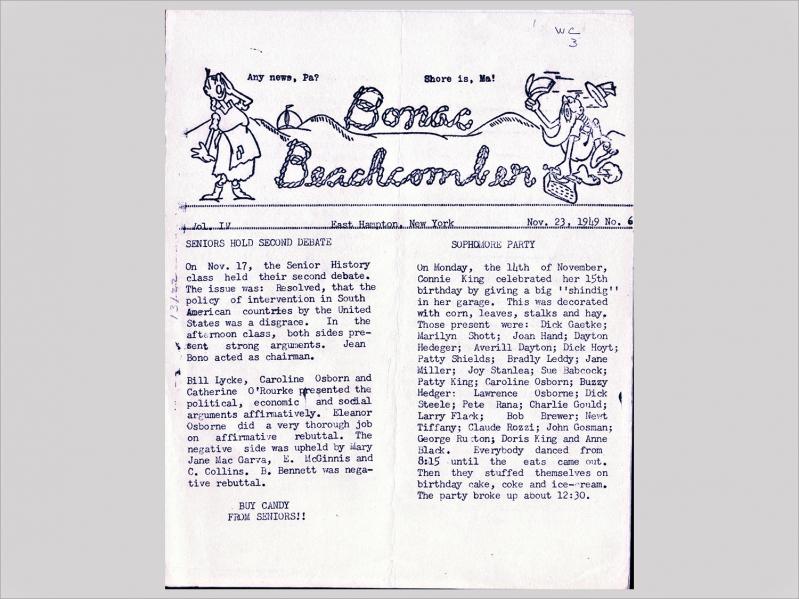 This Bonac Beachcomber came out the day before Thanksgiving in 1949, on Wednesday, Nov. 23. Surprisingly, there were no Thanksgiving festivities or football team coverage featured in the school paper.

The front-page news included a senior history class debate on intervention in South America, along with Connie King’s 15th birthday party, which took place in her garage. The decorations for Connie’s party included seasonally appropriate leaves, corn, and hay. Among those attending were Pete Rana, Averill Dayton, and John Gosman. A 16th birthday party for a junior, Norma Marchetti, also made the student paper with a shorter write-up, despite having guests in formal attire.

Somehow, Connie’s birthday party was also more headline-worthy than the junior prom, which had a harvest moon theme and a turkey as a door prize donated by the Bohack grocery store. It was won by Bill Lycke. Fashions for the junior prom made the second-to-last page, and apparently the best-dressed young lady was Doris King, who wore a taffeta dress with a full skirt. Other dresses mentioned were worn by Caroline Osborne, Paula Hasselberger, Norma Marchetti, and Sally Whitaker.

A senior class meeting to vote on the senior trip destination and discuss its cost also made The Beachcomber, although the coverage may have underplayed how contentious the meeting actually was, given the musical “Dedications” section of the paper. There the senior class received a dedication of “Feudin’, Fussin’, and a’ Fightin’ ” with a parenthetical reference to “The Trip!” beside the picture. Several other dedications seem to refer to party attendees and their dates or dancing partners, such as those for Connie King and Dick Hoyt.

Rather than anything holiday related, the big upcoming event the paper focused on was a visit from a radio host named Tony Allen, who was flown over from Westerly, R.I., by the Chamber of Commerce and the Lions Club. Allen apparently agreed to travel here because of the number of requests he had received from East Hampton and Amagansett residents.

Andrea Meyer, a librarian and archivist, is the head of collection for the East Hampton Library’s Long Island Collection.