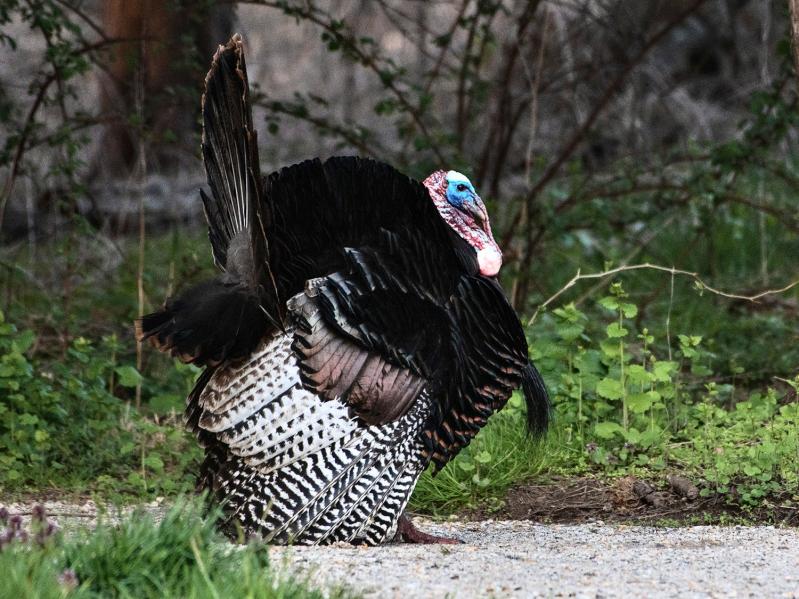 It’s hard to decouple the turkey from Thanksgiving, and the timing of this article is not helping matters. But long before we paired turkeys with mashed potatoes and stuffing and turned them into a national symbol, they were going about their business, hanging out in gangs, flipping leaves, and browsing the ground for nuts.

Stats: The New York State Department of Conservation estimates that there are about 3,000 wild turkeys on Long Island. They can run 12 miles an hour and fly 40 to 55 miles per hour. A full-grown male can weigh 25 pounds; females are roughly half that size. They don’t migrate.

Turkeys are unmistakable. During the mating season, between April and June, males stalk around, all puffed up, tails flared, looking like furniture. Attached to their dark, beachball-size bodies, a bare red, white, and blue (very American) head looks vaguely like a large, melted candle. Despite their ridiculous appearance, they somehow pull off an air of majesty as they pose for their females, silently stepping.

According to Dr. Kevin McGowan, a senior course developer at the Cornell Lab of Ornithology, turkeys make large nests at the bases of trees. Yet in all his years studying birds and doing fieldwork, he has found exactly one nest. So, these large birds, often conspicuous, can also be quite stealthy.

The call of the turkey, the gobble, is famous. It’s a startling, quick, chaotic sound, with no direction or melody. Males use it to attract females but also to warn other males. Hunters listen for it.

In the 1981 Errol Morris documentary, “Vernon, Florida,” a turkey-obsessed hunter describes stalking turkeys, mocked by their gobble. “They’re a smart bird. The smartest we got in this country,” he says as he stares out into the sunrise woods, listening intently.

Less familiar is the soft yet anxious whistle that females use to communicate with their poults when they get separated from the rest of the flock, perhaps trapped behind a deer fence. After they mate, the males split, leaving the females to group together and raise the young poults.

At night, they fly up to roost in trees, but they can be opportunistic. This summer, some poults roosted on my neighbor’s basketball hoop.

On the East End we find turkeys everywhere: in our backyards, our parks, and alongside roadways. If you go to the Elizabeth Morton Wildlife Refuge in Noyac, they’ll steal your wallet. Their ideal habitat is the forest, preferably one full of nut-dropping trees like oak, beech, and hickory. They supplement those nuts with the seeds from native grasses and fallen fruit, like that of the black cherry tree.

We may take them for granted now, but only 30 years ago, they were absent from the East End. They were reintroduced to Long Island in 1992. Their first release in East Hampton Town wasn’t until 2004. Andrew Gaites, the principal environmental analyst for the town, recalls half a dozen being released at Jacob’s Farm Preserve in Springs.

When the first European settlers arrived, turkeys were numerous. Much of the forest in New York was cut during the early part of the 19th century to accommodate farming. This reduced their main food source and habitat. According to the D.E.C., “The last of the original wild turkeys disappeared from New York in the mid-1840s.”

By the early part of the 20th century, farmland was reverting to woodlands, and by midcentury, turkey habitat had increased to support turkey populations again. An intrepid group from Pennsylvania crossed into New York in 1948, the first turkeys in New York after a 100-year absence.

Disney, if you’re reading, we need a movie about those Pennsylvania turkeys, please.

“Their comeback was a real good thing,” said Dr. McGowan. “They look like they’ve peaked at this point.”

In fact, there are so many turkeys in Suffolk County now that at the end of the summer, the D.E.C. announced an addition to the fall hunting season. In 2023 it will hold the first-ever spring season from May 1 to May 31. In New York State, after deer, turkeys are the most sought-after game.

Terry O’Riordan, of the East Hampton Sportsmen’s Alliance, was once in a tree stand waiting for deer when he saw a group of turkeys stalked by a fox. “The fox and the turkeys were only three yards apart,” he recalled in an email. “I think the fox thought it would be wiser not to take on 10 wild turkeys, at least four of which were mature ‘toms,’ with huge spurs. The young fox exhaled slowly, stayed crouched and still, and watched the turkeys slowly walk away, as did I,” he wrote.

Jamie Ellis, a local inventor and artist, has eaten wild turkey on many occasions. “The meat of a wild turkey is tough, and a lot leaner. They’re smaller, not fat. The meat is darker, and the flavor is much deeper. There is more character to the meat, but it’s delicious. You don’t cook them like a butterball. You have to braise them and make coq au vin. They can handle it.”

Dr. McGowan dispelled a local conspiracy theory I’ve often heard repeated in my years of East End birding. Prior to the 1990s, the lone star tick wasn’t the scourge it has since become. The coincidental re-introduction of turkeys with the rise of the evil, hated pests, gave rise to the idea that turkeys brought the ticks with them.

“Mammal ticks don’t ride on birds,” Dr. McGowan said in a phone call. “Birds and mammals are pretty different. There are few parasites or diseases that live on both.” He also dispelled the notion that turkeys eat ticks. “Not that I know of,” he said.

For all their population success, it remains to be seen if the onset of beech leaf disease, which is killing beech trees in the Northeast, will negatively affect the turkeys. According to John Bull, in his book “Birds of New York State,” beech nuts are one of two main autumn foods for the turkey.

“They do eat a variety of other mast as well,” said Dr. McGowan. “But we’re losing ash trees too. You start taking these things out of the picture, they might have some significant effect on populations.”

But no bother. Today, Americans will consume 46 million farmed turkeys, the game is on, and the future is progress.