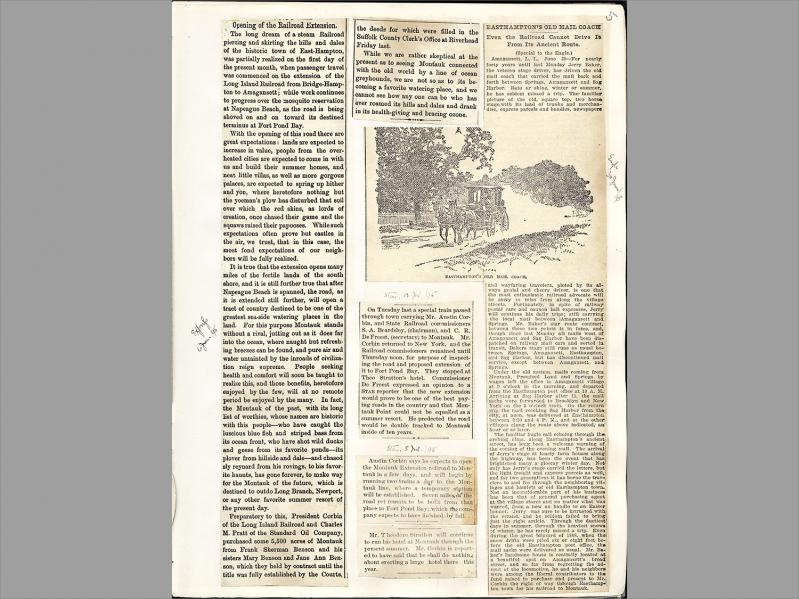 This scrapbook is the work of several years and the hands of Elizabeth Agnew (1863-1955). Elizabeth’s father was Dr. Cornelius Rea Agnew (1830-1888), the first owner of Agnew Cottage, one of the Montauk Association houses.

Montauk was largely undeveloped until the late 1800s, when Arthur Benson (1798-1889) convinced several of his friends to buy adjoining plots of land and build houses along Montauk’s southern shore. These houses became the Montauk Association.

Elizabeth’s scrapbook contains newspaper clippings spanning 1895 and 1925. She used both New York City and local newspapers, including The East Hampton Star and The Sag Harbor Express. The story of Montauk’s development is captured in her pages, starting with the Montauk Association’s land purchases and continuing through the Long Island Rail Road’s expansion to Montauk in 1895.

The railroad brought a constant connection between the rest of Long Island and Montauk, three times a day. It also caused lawsuits with the Montauketts remaining on tribal land. Headlines pasted into Elizabeth’s scrapbook repeatedly romanticized the dispossession of the “last of the Montauks,” but despite displacement by the railroad, members of the tribe still inhabit the East End today.

Beginning in 1898, the scrapbook documents the Spanish-American War and the establishment of an Army camp at Montauk. Troops returning from Puerto Rico and Cuba arrived at Camp Wikoff for isolation in case of contagion before traveling on. This sort of disease control built on the work Elizabeth’s father did with the Sanitary Commission, which may have given it added significance for her. Following an immediate outbreak of typhoid, Camp Wikoff became a quarantine station briefly before being abandoned. After covering Camp Wikoff, Elizabeth returned to documenting the commercial and residential expansion of the peninsula.

Within her documentation of the biggest headlines of the time, she includes obituaries, personal advertisements, and items exclusively of local significance. The contents clearly convey her desire to record and retain both historically significant events and a sense of daily life in Montauk at the turn of the 20th century.

The complete 175-page Montauk scrapbook by Elizabeth Agnew can be viewed at digitallongisland.org.