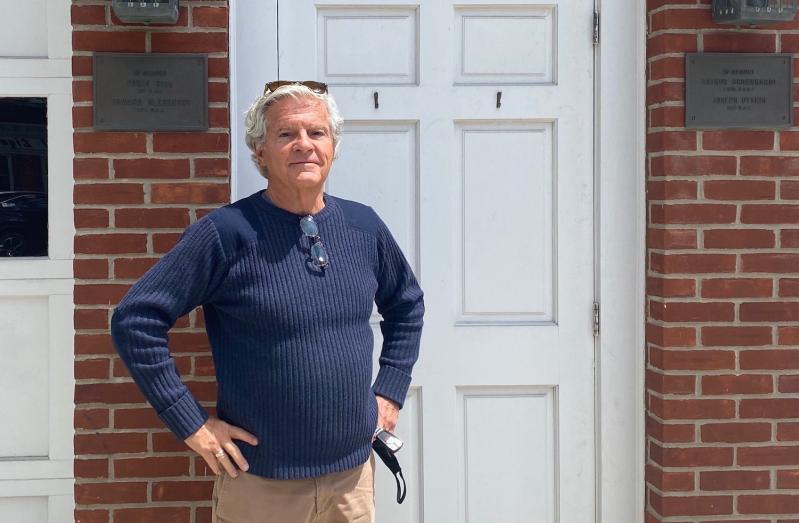 Mayor James Larocca laid out some of his ideas for the Sag Harbor waterfront in a recent interview.
Jamie Bufalino
By Jamie Bufalino

As the Sag Harbor Village Board continues to refine the details of a new zoning code for waterfront development, Mayor James Larocca has a vision for the area that includes expanding John Steinbeck Waterfront Park, creating an affordable housing district in the commercial core to the west of Main Street, and maintaining control of a municipal parking lot that Bay Street Theater hopes to use for a new theater, he said on Monday.

Rose Cheng, the owner of 2 Main Street, which is home to the K Pasa restaurant and other businesses, recently sold the building to a company that is seeking to have Southampton Town purchase it through the community preservation fund.

“I’ve been communicating with all of the players all through this thing,” said Mr. Larocca, who is eager to make the parcel an extension of Steinbeck Park. “Two Main Street becoming available for the park, in my mind, that is a game changer for the village. When this closing was happening, I communicated that it would be appropriate for the new owner, as a showing of good will, to submit a ‘willing seller’ letter to the C.P.F., and within days of the closing, they sent a letter triggering that process with the town.”

The transaction took place as the village was preparing to play host to the American Music Festival, for which Steinbeck Park was a venue. The weekend-long festival was a “wild success,” Mr. Larocca said. “The gathering of civic life on that space was for me a complete vindication of the effort we made, now six years long, to develop the park. It was a real renaissance of village life, and gave hundreds and hundreds of people a real introduction to the park.”

Bay Street Theater is seeking permission to build a new theater on the site of the Water Street Shops building, a parcel next to Steinbeck Park, and, in April, it revealed architectural renderings of the structure, which was widely panned for being too large.

The theater has alternate plans that have not been made public, Mr. Larocca said, and thus far it has not offered an official proposal. “The next step has to be that they tell us what they want to build, and it has to fit into the plan for the park,” and receive approval from the village’s regulatory boards, he said. Ultimately, he would like to see the theater built elsewhere in the village and the parcel become part of Steinbeck Park, “but I’m also a realist.”

He is, however, trying to prevent the theater from being awarded a lease to a municipal parking lot, which is owned by National Grid and which the village has been leasing for $1 per year. Known as the “gas ball” lot, the property is across the street from the Water Street Shops parcel. The lease is due to change hands on Jan. 1.

“I’ve been talking to the company, and my theme has been, I would like them to pause the execution of the lease to Bay Street until the [waterfront] zoning process is completed, and while the transactions of the surrounding properties are settled,” he said. “They are smack dab in the middle of the biggest real estate moves going on in the village. It would be a mistake to act in the middle of all that.”

One key change to the waterfront zoning code Mr. Larocca would like to see is the reclassification of the area west of Main Street from an office district to an affordable housing district. He envisions the area being developed similar to Main Street with businesses on the ground floor, and with second and third-story rental units.

Mr. Larocca said he would be amenable to offering a landing point on the waterfront for the Peconic Jitney, a ferry service being proposed by Hampton Jitney that would provide a direct link between Sag Harbor and Greenport. “I’m a boat guy, I like boats, so waterborne transport is an attractive idea,” he said. “So I’m receptive to hearing a proposal, and figuring out whether we can work it out with our strained waterfront.”

A more immediate addition to the waterfront will take place later this fall, he said, when the village plans to start work on building a walkway that will ultimately connect Steinbeck Park to Long Wharf. “Phase one will be from the western fence of the park to the pathway under the bridge, and I’m hoping we can move fast enough to do it before the first snow.”