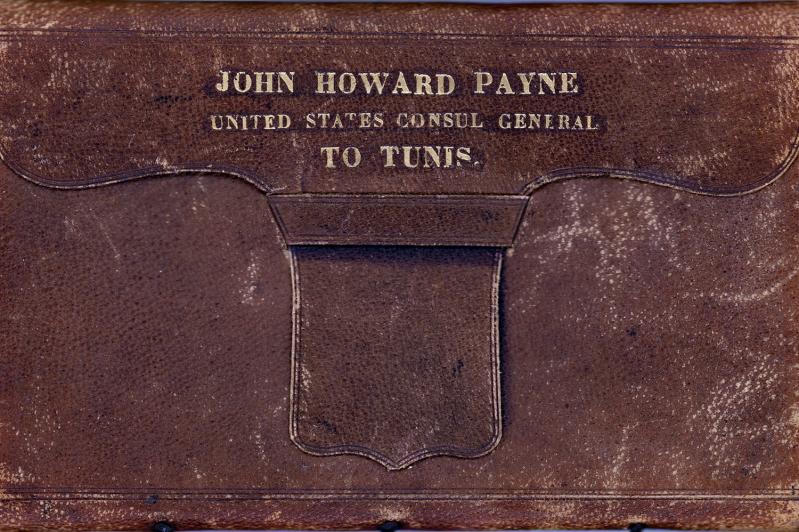 The composer John Howard Payne used this diplomatic purse during his appointment as ambassador to Tunisia, a position he first received under President John Tyler (husband of Julia Gardiner) in 1841. After President James Polk's election in 1844, Payne was recalled. However, in 1851 Secretary of State Daniel Webster helped Payne regain the appointment, which Payne held until his death on April 9, 1852, in Tunis.

Payne's parents, William Payne and Sarah Isaacs Payne, lived in East Hampton before his birth, and William taught at Clinton Academy. The family moved to New York City for other teaching opportunities, and John was born there in 1791.

Payne, like many actors of his time, left the United States for London in 1813, living abroad until 1832. During this period, he composed his most famous work, "Home, Sweet Home," which debuted as a song in the operetta "Clari, the Maid of Milan" at Covent Garden in 1823. While this song may have been inspired by East Hampton, where Payne spent time as a child, evidence suggests he probably never lived in the house that is now the Home, Sweet Home Museum.

When Payne returned to the United States in 1832, he became involved with the Cherokee Nation, which was being forcibly removed from its native lands. Payne advocated politically for the Cherokees, writing a 14-volume history of the Cherokee people, along with some of the protest material used by Cherokee Chief John Ross. Following his work with the Cherokee and some misadventures as a publisher, Payne ended up in Washington where his friends helped him receive the ambassador appointment.

This purse, or pouch, supposedly carried Payne's letter of introduction as ambassador. Letters of introduction were common in the 19th century, to connect friends of friends before emails and phones made communication timely. The purse is in the Home, Sweet Home Museum archive, and is made of Moroccan red leather, with gilt lettering bearing Payne's name and appointment.