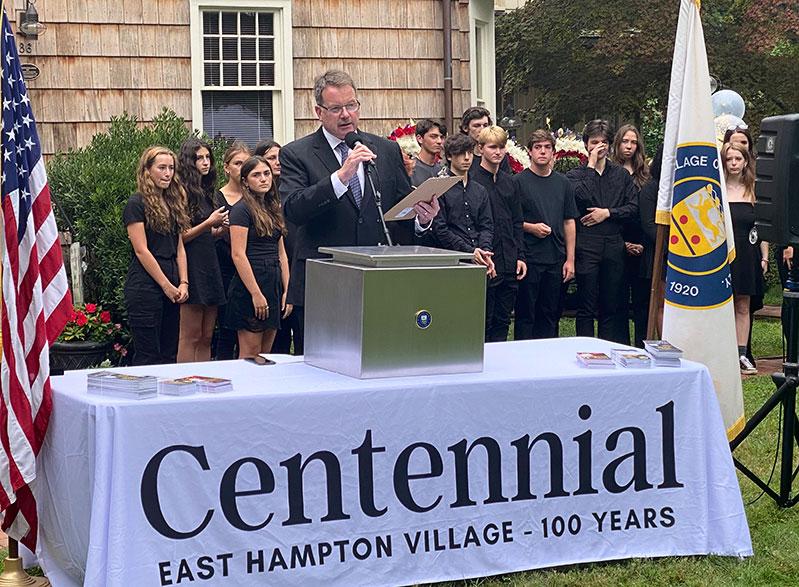 "This is a community with strong roots to its past and a deep commitment to historic preservation," Mayor Jerry Larsen said at a ceremony Friday. Behind him was the East Hampton High School Choir, which performed as mementos were added to a time capsule.
Jamie Bufalino
By Jamie Bufalino

East Hampton Village Mayor Jerry Larsen, East Hampton Town Supervisor Peter Van Scoyoc, and members of the East Hampton Clericus and the Ladies Village Improvement Society, celebrated the 100th anniversary of the village's incorporation on Friday by adding mementos to a time capsule that will remain buried on Village Hall's front lawn well into the next century.

"We are asking the village board of 2120 to open the capsule and share what is inside with all of the residents," said Mr. Larsen, who asked the participants not to reveal what they had contributed.

Before making his contribution, the Very Rev. Denis Brunelle of St. Luke's Episcopal Church offered a prayer that the village, which he called a "shining beacon on the East End," would continue to "serve all citizens equally with justice."

The Rev. Scot McCachren of the East Hampton Presbyterian Church asked God to "protect these beautiful shores and land from the natural ravages of the passing seasons, and from the indifferences of humanity."

Cantor-Rabbi Debra Stein of the Jewish Center of the Hamptons read a blessing from Rabbi Joshua Franklin: "As we prepare to seal away our keepsakes, photographs, letters, books, and mementos, let this moment remain in our hearts and minds as a reminder that it is upon us that we put in the time and energy, that we summon the willpower, that we act with love and compassion to our fellow humans, such that we are able to pass on to our future generations a strong, joyful, and loving community."

Mr. Larsen paid special tribute to the former village mayor Paul F. Rickenbach Jr., who served the village as a police officer for 24 years, as a trustee for two terms, and as mayor for 27 years, the longest mayoral tenure in village history. "So, out of the 100 years, the man had put in 50 years of service to our community," Mr. Larsen said.

Mr. Rickenbach was not in attendance, but he asked Mr. Larsen to read a statement. His service to the village had been a "humbling and rewarding journey," he said. "The village owes me nothing, I owe it everything. May God bless our village and everyone who calls it home."