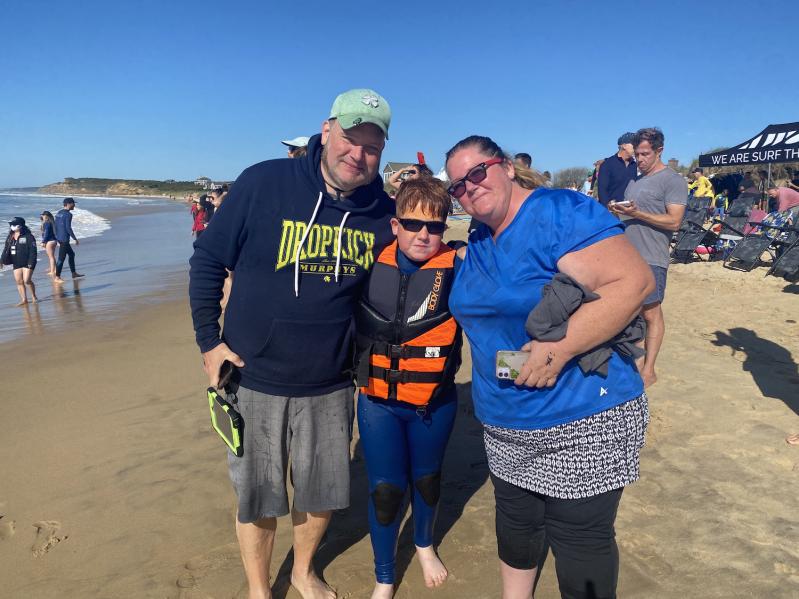 "He liked the adrenaline rush, and the feeling of accomplishment," Brandt Cullen said of his son, Phinehas, center. "The kids can be themselves here," added Phinehas's mom, Sue.
Jamie Bufalino
By Jamie Bufalino

Children with special needs and their families got a chance to experience the healing power of the ocean on Saturday at A Walk on Water's surf therapy event at Ditch Plain in Montauk.

As the kids rode the waves with local surfers, their parents and throngs of onlookers cheered them on. Brandt and Sue Cullen traveled from Babylon with their son, Phinehas, who has A.D.H.D. and other behavioral disorders, and daughter, Moxie. "He has anxiety, so he was nervous, but he eventually got out there, and when he came in, he's like, 'I loved it,' " said Mr. Cullen. "He likes the adrenaline rush, and the feeling of accomplishment."

The event also provided a much-needed day of relaxation for parents. "I'm a bit of a control freak, and my wife and I are always worried about our kids because they're running around," Mr. Cullen said. "But here we don't have to worry."

In addition to the surf instructors, A Walk on Water provides chaperones on the beach and in the water. "We want this to be the best day for athletes and the families, but it has to be safe," said Kim Murphy, the organization's director of volunteer engagement. "This is our fifth year in Montauk, and one of my most memorable experiences here was with a parent who was terrified to have his son go out. He was at the water's edge and said, 'No way. I can't let him go with you guys.' So we chatted with him, convinced him it was safe, and his son rode in with the biggest smile, and that dad broke down in tears."

James Bogetti, a Montauk resident who served as surf instructor on Saturday, was introduced to surf therapy years ago when a friend's mother organized a similar event. "I took one kid out, and his mom told me he was mute and had never spoken. So we're out there, and I'm saying to him, 'Should we go on this wave?' All of a sudden he looked at me and said, 'Go.' We came in, and he's saying, 'Go,' and his mom was hysterical, because she had never heard him speak before. That's what got me really hooked on A Walk on Water, and I would never miss it for the world."

The experience can be transformative for even the most anxious participant, said Ms. Murphy. "You might have an athlete who has not even been in the water because they're afraid. It's loud, and lot of the kids have sensory issues, and they see people falling over. But whatever anxiety they have on the beach, they come back in with a relaxed body. The ocean is soothing and peaceful, and then when you surf and people are cheering for you, you feel like a superstar."