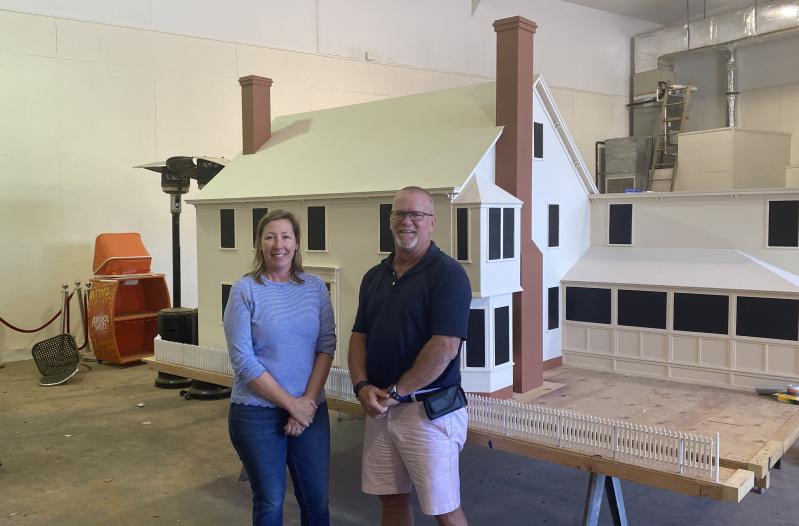 Rose Brown and Ray Harden checked in on the construction of a model of Village Hall that will be part of the village's centennial parade on Sept. 25.
Jamie Bufalino
By Jamie Bufalino

East Hampton Village will hold a celebration of the 100th anniversary of its incorporation next weekend, and to mark the occasion, Rose Brown, a trustee, Ray Harden, an owner of Ben Krupinski Builder and a former trustee, and James McMullan, an architect and vice chairman of the village's zoning board of appeals, joined forces to create a keepsake for posterity: a model of Village Hall that will be on display in the parade down Main Street on Sept. 25, and then stored at Mulford Farm.

"When I heard about the centennial celebration, I thought, Village Hall is such a beautiful, historic building, it would be really nice to have that showcased in the parade," said Ms. Brown. The building, known as the Beecher-Hand House, was built in the mid-18th century. The Rev. Lyman Beecher, a Presbyterian minister who co-founded the American Temperance Society and was the father of Harriet Beecher Stowe, who wrote "Uncle Tom's Cabin," bought the structure in 1800. When Reverend Beecher decided he could no longer afford to live in East Hampton, he sold the house to Abraham Hand, a sixth-generation descendant of one of the original proprietors of East Hampton, according to "A Brief History of Our Village Hall" by Averill D. Geus, the former East Hampton Town historian. The village purchased the building in 1994.

Mr. McMullan designed the scaled-down structure based on the original plans for Village Hall, and Mr. Harden supplied the materials and manpower. "I had my guys working on it on rainy days and whatnot," said Mr. Harden, who estimated the cost of labor at $26,000. The model mimics the original down to the corbels, the fascia, and the decidedly un-historic addition. "There was a question about whether to include the addition, and Bob Hefner recommended we put it on because that's what people will recognize," Mr. Harden said, referring to Robert Hefner, the village's former director of historic services.

The centennial celebration will start on Friday, Sept. 24, at 11 a.m. at Village Hall with a blessing of the village by local religious leaders, and the placement of various objects in a time capsule. Talks about the history of the village will be held at 2 p.m. in Herrick Park, and a black-tie gala will be held at the Maidstone Club at 7 p.m.