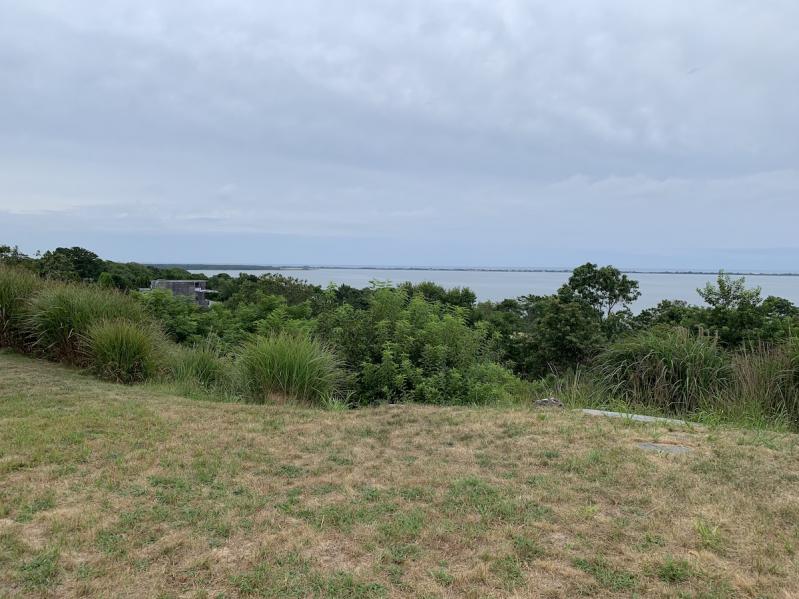 A view of the Sugar Loaf burying ground, which is being returned to the Shinnecock Nation.
Julie Greene photos
By Jon Kuperschmid

Sugar Loaf, a burial ground sacred to the Shinnecock Indian Nation, has been returned to the tribe. Late last month, the Shinnecock Nation Graves Protection Warrior Society announced that the 4.5-acre piece of land in Shinnecock Hills had been purchased for $5.6 million with the help of the Peconic Land Trust.

A 7,000-square-foot house stands on the site, but it will be demolished. The community preservation fund of Southampton Town bought the development rights to protect the land once and for all at a cost of $5.3 million. Roger Waters of Pink Floyd, who lives in Bridgehampton and is an activist for Native American rights, assisted the Shinnecocks in their cause with a donation of several hundred thousand dollars.

The move to return the land to the Shinnecocks was a long time coming. In September of 2020, the Southampton Town Board voted unanimously to support the Graves Protection Act and a Shinnecock Hills building moratorium. The Graves Protection Act established procedures if human remains should be encountered during construction, according to a previous press release from the town, and the six-month moratorium required that an archaeological review be completed before any housing construction or excavation was begun within areas that include Fort Hill and Sugar Loaf in Shinnecock Hills, west to Peconic Road, which runs from North Road south to Shinnecock Bay.

The adoption of legislation to ensure that human remains are left undisturbed was just one step in a victory for the Shinnecocks.

Southampton Town Supervisor Jay Schneiderman said that returning the land to the tribe doesn't undo any injury, but it does help heal a historical wound. "Sugar Loaf Hill is a sacred site of the Indigenous people of our region. It is where they buried their ancestors for generations. Restoring the sanctity of this burial area and returning it to the Shinnecock people was simply the right thing to do," he said.

Shane Weeks of the Shinnecocks, a founding member of the tribe's graves protection society, called the acquisition "the first of its kind in the several hundred years between the Town of Southampton and the Shinnecock Nation. This event marks an amazing achievement between our communities and is an effort toward the much-needed healing that must take place. A glimpse of what the future may look like, I hope."

Mr. Weeks said the next step is "to work with the Peconic Land Trust to dismantle the house so that we can return the peak of Sugar Loaf Hill back to its natural state forever. We will then begin the process to transfer the title of the property to be under the control of the Shinnecock Nation."

The Sugar Loaf land is just one example of the larger issue of sites of cultural sensitivity being developed, a problem which Mr. Weeks hopes will be addressed with new research.

"There are several known sites around the Town of Southampton and on Long Island in general," he said. "The amazing members of the Shinnecock Nation Graves Protection Warrior Society have been working diligently with the town's community preservation fund, the Peconic Land Trust, and others in preserving developed and underdeveloped land in culturally sensitive areas. We appreciate the C.P.F.'s acknowledgement of our case and putting the Shinnecock Hills in their list of priority properties to acquire for preservation."

The town plans a nature trail up Sugar Loaf, where hikers could take in the view of Shinnecock Bay.