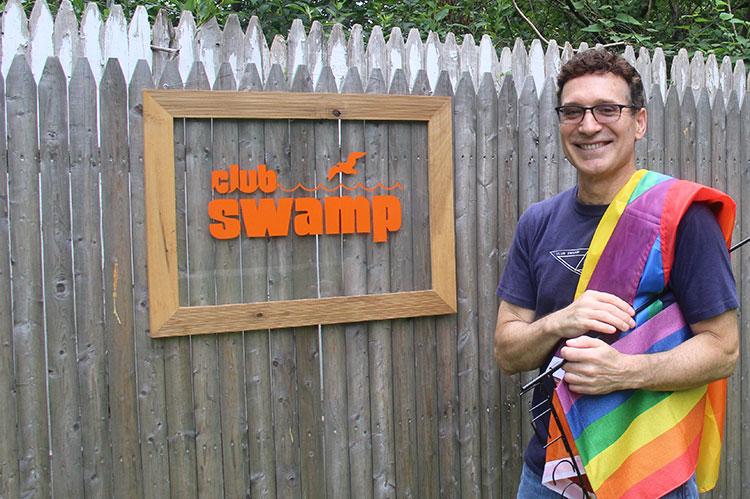 Tom House of Springs has started a nonprofit organization, Hamptons Pride, to pay tribute to the legacy of the Swamp.
Durell Godfrey
By Christine Sampson

When Tom House speaks of the Swamp, there's more than nostalgia in his voice; there is unmistakable reverence and a certain urgency. The Swamp was the legendary gay nightclub that stood some 25 years in Wainscott on a spot now known as Wainscott Green, or, as Mr. House wrote in The Star last year, "a psychic gay burial ground so deep it approaches the literal."

"History is written by the living, and many of the voices that would speak for the Swamp are long gone," he wrote. Now, his own voice is the one calling the loudest for a tribute to the history of the Swamp as the center of gay social life in East Hampton ever since Bill Higgins opened it in 1976.

Mr. House, who tended bar at the Swamp and its successor, the Star Room, for 20 years, is the founder of Hamptons Pride, a new nonprofit  that wants to celebrate this significant piece of local L.G.B.T.Q. history by establishing a living monument on the site where the Swamp once stood.

"My vision is that it will be both an historical marker and a social area that will attract the new generation of L.G.B.T.Q.+ people and their allies to gather where their gay forebears would gather," he said in an interview.

There will be an official kickoff party for Hamptons Pride on Sept. 12, billed as a tea dance in homage to Mr. Higgins's Sunday-afternoon events. He died of AIDS in 1990.

The limited-ticket launch will take place from 3 to 7 p.m., with an after-party at the Clubhouse from 9 to midnight featuring a drag performance by "Naomi, the Crown Jewel of the Hamptons." Proof of full vaccination is required to attend either event, and Pride-theme masks will be distributed. There will be a sign-language translator, as well as a live-stream video for those who cannot attend in person. More information is online at hamptonspride.org and on Facebook.

RELATED: A Talk on L.G.B.T.Q.+ Identities

The timing of the party is close to the one that Mr. House threw at the Star Room to celebrate his 20th summer behind the bar, the weekend before Labor Day in 2007.

"The word that keeps coming to me is 'repository,' " he said. "It became a repository for all the history because it was the last club standing, and it became a park. It didn't become a car wash or a commercial business. It gives us this amazing opportunity to build something so that the history doesn't vanish . . . something so beautiful that everyone will want to see it in honor of L.G.B.T.Q.+ history and the East End population."

Louis Bradbury, a local resident who was president of the Gay Men's Health Crisis organization in the early '90s, lauded Mr. House's new effort and said it fulfills a need here.

"I was really struck with his [Star] essay, and his energy," Mr. Bradbury said. "If it were just a party at the Wainscott Green and a plaque, I'd say, 'That's cute, I'm not into parties, but here's $100.' He wants to do something that benefits the parkgoers and community at large, and by calling it Hamptons Pride, he has a longer, more significant future where he wants to provide a way to help the L.G.B.T.Q. community that is based in the Hamptons. I like his idea."

Hamptons Pride has also found an ally in the Wainscott Citizens Advisory Committee, which was instrumental in East Hampton Town's effort to buy the property for preservation in 2018, and which successfully lobbied for it to be dedicated to the late Rick Del Mastro, a longtime chairman of the committee, family man, and philanthropist. Mr. Del Mastro died of Covid-19 in April 2020.

Carolyn Logan Gluck, the committee's current chairperson, recalled this week that Mr. Del Mastro had once had the vision of creating a memorial "by which to remember the Swamp and its patrons, an important part of the Wainscott community in earlier decades." Mr. House presented his new organization to the citizens advisory committee on Aug. 7 and was warmly received.

"The W.C.A.C. is fortunate to count itself as his ally in this truly worthwhile endeavor. Wainscott Green will be enriched by his vision and dedication," Ms. Logan Gluck said.

Mr. House has many ideas for Hamptons Pride, but first on the list is recognition at the Wainscott Green.

"I would love for [it] to be a really beloved, important, local organization for L.G.B.T.Q.+ people and allies. I would be really proud of that," he said. "Why not let that fall to the former bartender to bring that together? Part of me will be a bartender forever, getting people to talk to one another and making sure everyone enjoys their time. I'd love to see that section of the park be a place to carry on that sort of happy social experience."