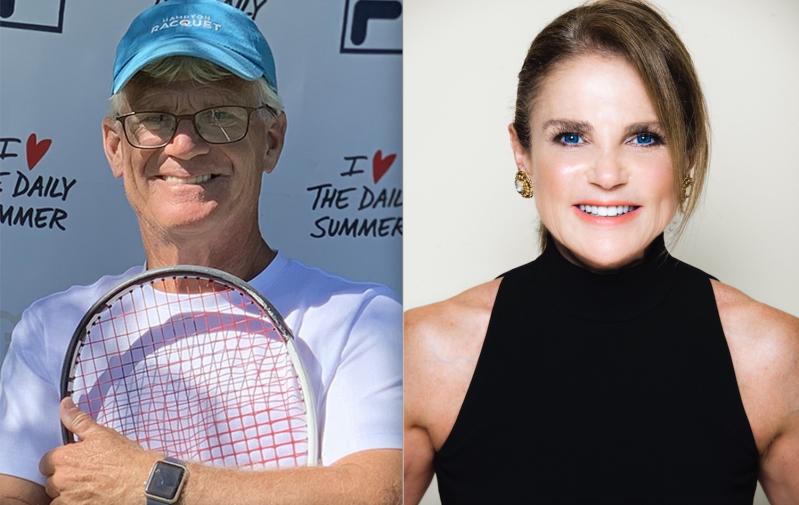 At its Back in Black fund-raiser on Aug. 28 at the Hampton Racquet Club, the Ellen Hermanson Foundation will honor John Graham, director of the club, and the actress Tovah Feldshuh.
Steve Feldman and Julio Gaggia Photos
By Bella Lewis

When the Ellen Hermanson Foundation holds its Back in Black summer benefit on Aug. 28, it will honor Tovah Feldshuh, a Broadway actress, singer, and playwright, and John Graham, the executive director of the Hampton Racquet Club, where the outdoor event will be held.

Ms. Feldshuh's and Mr. Graham's devotion to the East End and the tireless effort they pour into the community made the pair obvious choices as honorees, said Julie Ratner, the president of the Ellen Hermanson Foundation.

"They've been wonderful, kind loyal friends to the Ellen Hermanson Foundation, each one bringing their own gifts," said Ms. Ratner.

She gushed about Ms. Feldshuh's eternal readiness to help out "whether it's a video or Zoom to help us get the word out, she does it with grace, humor, and talent." Ms. Feldshuh said she would do anything for Ms. Ratner. So far that has included jumping on trampolines and rapping as Ruth Bader Ginsburg.

Ms. Ratner called her a "consummate artist," hard-working and someone who brings such integrity to everything she does.

"My involvement with the Ellen Hermanson Foundation is purely personal," Ms. Feldshuh said Tuesday. "It's because Julie is a woman of her word. She promised she would bring up Ellen's beautiful daughter Leora," as well as do work in Ellen's memory. "She is a person willing to dedicate herself to causes greater than herself and this is why I support the foundation," said Ms. Feldshuh.

Mr. Graham has been involved with the foundation for 10 years. "I was running some things for the national breast cancer charities and I was really trying to think what to do more locally. I knew Ellen's Run, so I got in touch with them and started doing events, family-oriented sports carnivals. A fun day for really no money."

"He did this without even telling us he was going to do it," said Ms. Ratner. Mr. Graham held a Day of Play at the tennis club for nine years and since "Covid knocked me out of the box," he said, he was thrilled to help out by hosting an outdoor event this year.

"He's like the tennis whisperer with children, total joy and abandon, so the child feels like they're a star," Ms. Ratner said of the gold standard John Graham Method. She noted his gift of deep caring in all he does. "It's a kind of integrity and honesty and good humor that elevates us and he doesn't even try; it's just how he is."

Ms. Ratner hopes for around 150 people at the event. "We take great strength from all these women warriors, so we celebrate wellness and health and access to state-of-the-art health care. No one is turned away due to lack of insurance or inability to pay," said Ms. Ratner of the organization's mission.

She said she is excited to have the Lynn Blue Band in charge of getting people dancing, as well as food from the club's new Vietnamese cafe stewarded by Lan Tran Cao, the owner and chef of V Cafe in New York City. The party will run from 6:30 to 10 p.m.

Proof of vaccination or a negative Covid test are required for entry. Tickets start at $625 and are available online at ellenhermanson.org.

Money raised at the event will pay for medical equipment and breast cancer screenings at the Ellen Hermanson Breast Center at Stony Brook Southampton Hospital, with locations in Hampton Bays and East Hampton. Over 12,000 screenings were performed in 2019.