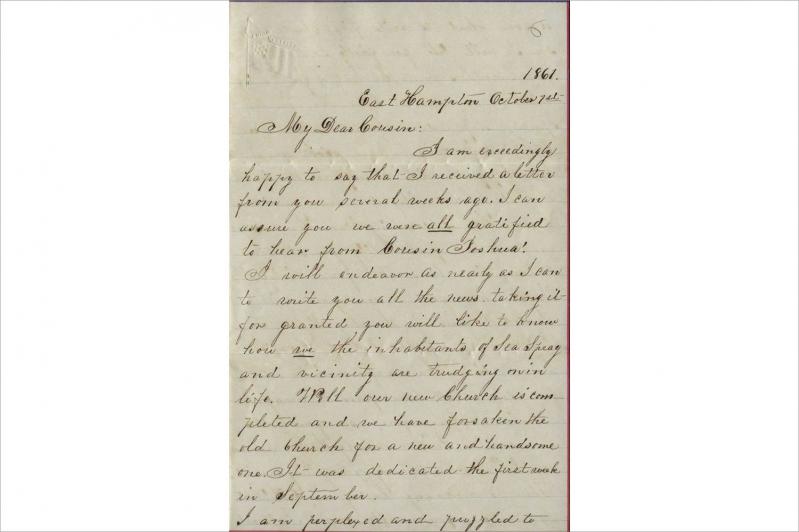 "Cousin Belle," presumably 15-year-old Caroline Isabella Homan (1846-1923), daughter of Egbert Homan (1812-1888) and the former Caroline Conklin (1821-1898), wrote this detailed letter to Joshua B. Edwards (1830-1915) in October of 1861. Joshua, a legendary whaler here, was at sea, according to the local Civil War draft registries. Belle filled her letter with details about East Hampton happenings, family members, and her feelings about the ongoing Civil War.

The letter includes news of Joshua's brothers, Charles B. Edwards (1833-1901) and Jesse B. Edwards (1835-1910). Belle reported that Charles had returned home with stomach cramps soon after being "shipped on board the Revenue Cutter." Despite his bout of ill health, Charles was courting Fannie Havens at the time Belle wrote, and she predicted that Joshua might have a new sister-in-law soon. But the romance didn't last, and years later Charles married Elizabeth Sherman.

About Jesse, Belle wrote that he was "at sea again" with Jacob Havens (1815-1904) onboard the brig Myra. The ship sailed for the South Atlantic in June of 1861. Belle also noted Jesse's courtship of Maria Havens (1848-1918), again predicting that Joshua would have a new sister-in-law soon. This prediction proved correct, and three years later Jesse married Maria.

Belle also reported on a number of twin babies born to local friends, as well as her solemn goodbye to her cousin "[S]ammie King of Manchester" as he left for war. This was Samuel W. King of the 10th Regiment of Connecticut, who enlisted on Sept. 8, 1861. Belle accompanied Sammie to Sag Harbor to see him off and expressed her fear that "it was the last time I ever should see him again." Unfortunately, her fear came true, and Samuel did not survive the war. He died on April 19, 1862.

Belle married John Daniel Hedges (1839-1918) on Oct. 17, 1864, three years after writing this letter. She died in 1923, while serving as the vice president of the East Hampton Library's board of managers.