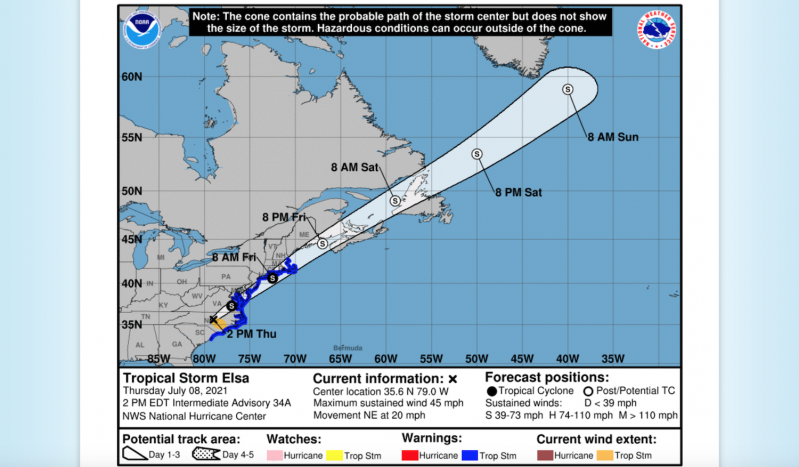 The South Fork is forecast to experience the worst of Tropical Storm Elsa’s gusty winds, heavy rain, tidal flooding, and rough surf between 6 a.m. and noon on Friday. Elsa, which made landfall in Florida on Wednesday, is expected to move through Mid-Atlantic states and into New England through Friday.

The storm was moving across the Southeast on Thursday morning, bringing with it tropical storm force winds and heavy rainfall. Flash flooding and tornadoes are possible, according to the National Weather Service.

A warning is in effect for Long Island from East Rockaway Inlet to Montauk Point along the south shore and from Port Jefferson eastward on the north shore, according to the National Hurricane Center.

In an update on Thursday at 2 p.m., the hurricane center reported that Elsa was moving toward the Northeast at a rate near 20 miles per hour, “with an increase in forward speed during the next couple of days. On the forecast track, Elsa will continue to move over North Carolina today, pass near the eastern Mid-Atlantic states by tonight, and move near or over the northeastern United States on Friday and Friday night.”

Maximum sustained winds are near 45 miles per hour, the center said, with higher gusts. “Some strengthening is possible tonight and Friday while the system moves close to the northeastern United States. Elsa is forecast to become a post-tropical cyclone by Friday night.”

Two to four inches of rain, with isolated totals up to six inches, are possible through Friday.

More information, including rainfall reports and wind gusts associated with Elsa, is at wpc.ncep.noaa.gov/discussions/nfdscc5.html.