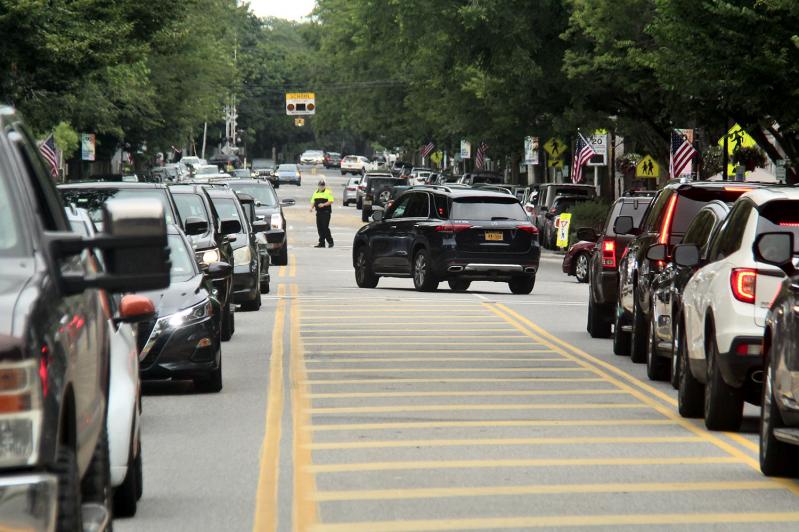 Newtown Lane in East Hampton was often at a near standstill from Friday through Sunday, as cloudy weather kept crowds off the beaches and in the South Fork's shopping districts.
Durell Godfrey
By Bella Lewis

There is "a lot of pent-up energy out there," East Hampton Town Police Chief Michael Sarlo said yesterday.

"It was an extremely busy weekend. The traffic was as heavy as we have ever seen it," he said. "There were numerous calls in and around the bars, as the normal nightlife scene has returned in full. . . . It is going to be a very busy and challenging summer season, and we ask everyone to be patient with our response times and understanding of the strain these crowds and increased activity place on our resources."

South Emerson Avenue in Montauk was particularly busy. Police got a report of overcrowding at the Royal Atlantic Beach Resort on Sunday at around 6 p.m., when patrons around the bar were supposedly blocking beach access. Both the manager and hotel security said they would rectify the situation.

In the span of seven hours on Sunday evening, police received 22 calls from across town to report fireworks. Dispatchers logged 68 noise complaints between Friday night at 9:30 p.m. and Monday at 12:12 a.m. Emergency medical personnel responded to at least 40 calls in the span of three days, many of them requiring transportation to the hospital. Calls for help were often clustered within a few minutes of each other, which in some cases required the volunteer ambulance companies to back one another up with mutual aid.

Peter Honerkamp, a co-owner of Amagansett's Stephen Talkhouse, gave the lowdown on weekend crowds and quashed rumors swirling on social media that the town fire marshal had closed the popular venue. Rather, he said, the fire marshal helped the Talkhouse monitor its massive line stretching down the Main Street sidewalk, informing people that "the Talkhouse is not admitting anyone else for the rest of the evening," according to Mr. Honerkamp. He was eager to avoid unnecessary crowds inside.

"What we did on Sunday is we got everyone in early," he said. Barricades kept people in line. Despite the volume of guests, "We weren't overcrowded; we didn't get a violation. We stayed at legal occupancy."

But law and order did not prevail universally across town, with Montauk becoming particularly problematic. Commotion outside the Surf Lodge on Edgemere Street around 10:15 p.m. on Sunday had to do with alleged disorderly conduct and physical harassment by Goran Jokic, 35, of North Main Street in East Hampton Village.

Police said he had been asked to leave the property numerous times and in response he "yell[ed] profanities and attempted to fight his way past police officers and security staff to re-enter the establishment." A report noted that he was involved in a physical fight with Officer Bradley Hughes, whom police said Mr. Jokic pushed, hit in the chest, and kicked in the knee. Charged with two violations, his arraignment date in East Hampton Town Justice Court was set for Wednesday (July 14).

An even more severe situation had played out on Saturday around 1 a.m. at the Bounce Beach, formerly the Sloppy Tuna, in Montauk. Harveer Singh, 23, of Floral Park, was charged with third-degree assault with intent to cause physical injury, a misdemeanor. According to police, Mr. Singh delivered one punch in the face to an unnamed individual, who went "unconscious for several minutes." As a result, the report said, the victim fell forward, hit his head on the pavement, and "suffered lacerations, contusions, and bleeding," requiring immediate medical attention. Mr. Singh's arraignment is on July 22.

In a blog post titled "Life Is a Highway Especially When You're Sitting Bumper to Bumper," Patrick McLaughlin, a real estate agent with Douglas Elliman, encouraged people to use free transportation options such as the Hampton Hopper and the Rove and Circuit shuttle services to simultaneously reduce traffic and avoid falling into fits of road rage.

"Everyone knows traffic sucks in the Hamptons," he wrote, "but while sitting on 27 is great for getting through your audio book and podcast backlog, it's not exactly fun when you're due at an appointment or need to get to that precious reservation on time!"

On the "Lost and Found Pets of East Hampton" Facebook page, a user posted on behalf of Jennifer Faga of Montauk. Montauk visitors "are out of control with fireworks this year," the poster wrote. Ms. Faga, who has a microchip scanner to help lost pets, had been expecting "a lot of pets to run scared, along with loads of wildlife."

For some businesses in town, the surge in activity coupled with less than ideal beach-going conditions meant chipper foot traffic. On Saturday afternoon, there was no vacancy in the Reutershan parking lot in East Hampton Village, which police closed off after it reached full capacity.

"It was a blast," said Colleen Moeller, owner of Petit Blue on the Reutershan lot. "We did so many private parties. If you came in here yesterday, it was just a sea of red, white, and blue star balloons. People came with drivers and housekeepers, setting up for events."

She had not been planning to work on Sunday at all. Finishing up an order that afternoon, however, the sun came out, and so did customers. "It was like a rave," she said, with people streaming through the parking lot. She said she worked until 7:30 p.m. and took in about $4,000 that day. One customer told her that Stop and Shop had sold out of disposable cups.

Love Binetti in Sag Harbor, which shares a storefront with Havens, a perfume and home fragrances boutique, stayed open until 10 p.m. on Saturday and 10:30 p.m. on Sunday, Diego Binetti, the owner, reported.

"It was unbelievable, nonstop," he said. "Everyone had really good energy."

Local folks lit up social media all weekend long with observations about the crowds and the traffic. Mary Anne Miller of East Hampton summed it up by saying "the East End is fried," and she wasn't talking about the weather. "It is the congestion, the inability to move about, the lack of supplies, staffing, housing. Everything is stressed to the max, creating a very strange environment in which to live and work and enjoy time off."

She later continued, "We are in a new phase of 'insane.' "

With reporting by Jamie Bufalino, Christine Sampson, and Christopher Walsh