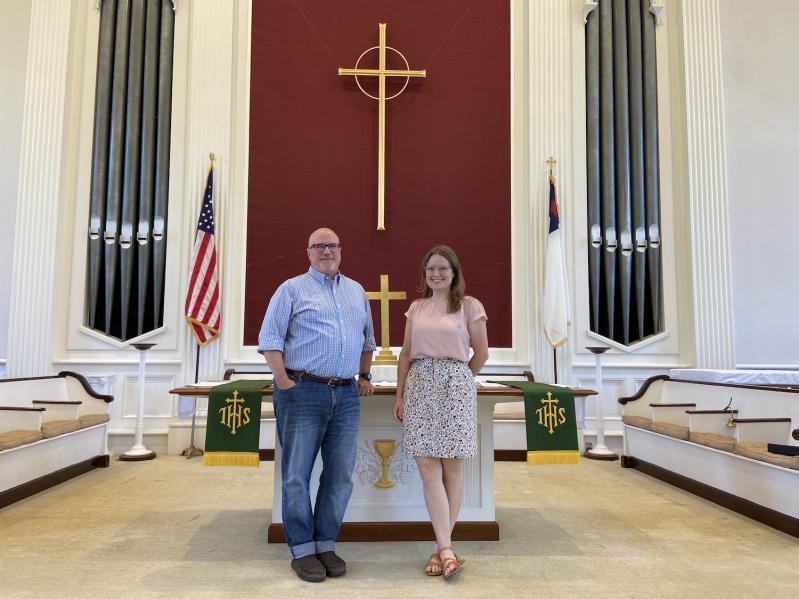 The Rev. Scot McCachren of the East Hampton Presbyterian Church and his daughter, Emily McCachren, a pastor in Pennsylvania, "share something that no one else in the family has, not just knowledge of Scripture but a feel for what the Holy Spirit does, and it is just so profound to us," she said last week.
Bella Lewis
By Bella Lewis

Mr. McCachren left a 20-year career in insurance, during which he had been as a deacon and elder at the Presbyterian Church in Morristown, N.J. When a pastor on a mission trip suggested he go to seminary, Mr. McCachren said, "all the closed doors were just opened."

As soon as he was admitted, he placed a call to his daughter, whose own dream had long been to attend Princeton Seminary. "Do you mind?" he asked her. "We'll be there together a year." Her first year there, 2015-16, was his last.

Ms. McCachren's religious upbringing was strengthened by the bond she forged with the church in her own right as she grew up. "It was in middle school that I started going to youth group, and I always said I wanted to be a doctor, architect, or a pastor." At some point, the latter starting feeling more true, she said.

"The church is where I learned to be a human. I felt important in the church," she explained, "I can't underplay the spiritual side of it." At lunch in school, she often sat with her more conservative church friends. "Women can be pastors!" she said excitedly, recalling her vigor and conviction as a child at the lunch table. She was ordained at age 25.

Not everyone is supportive, though. In McConnellsburg, "we have male pastors who actively preach against female pastors," Ms. McCachren said. "People know who I am even if I haven't met them," Ms. McCachren demonstrated with shifty eyes to paint the picture, "That's the Presbyterian minister," people will say. She is one of three women pastors out of the 87 churches in the county.

"It's a misunderstanding on their part, a misapplication of the intention of what Paul was saying," said Ms. McCachren, and her father agreed, adding that people give no credit to Jesus's female disciples, who he admits get much less air time in the Bible.

It is "definitely hard to be a woman in ministry," Ms. McCachren said. When that gets to her, she talks it out with people nearby, but inevitably leaves the room saying, "Actually, I have to go call my dad!"

Asked about her church's specific response to her leadership, she said with a smile, "I don't think the response was to me being a woman." Her more-generous-than-others' stance on immigration was "the first thing someone didn't come back for," she said.

"I made myself a rainbow stole and the first Sunday of Pride, I said that the church supports LGBTQ+ individuals and the benefit they have on our community." Some people indicated to her that they believed the church was not really the place to talk about that.

"It's so crazy because where is a better place to talk about it!" Mr. McCachren interjected.

"Emily and I both feel very strongly that as a pastor, you find you have a voice and it's a responsibility and a privilege. So we both think we need to speak our truth about social justice even if it makes people mad," said her father.

It is a self-selecting dynamic for a father and daughter to attend seminary at the same time, so of course it was lovely. Ms. McCachren lived on campus, but the "car time" that the pair shared on a visit to her nearby family home, was treasured by both, her father said.

"Now we share something that no one else in the family has, not just knowledge of scripture but a feel for what the Holy Spirit does and it is just so profound to us," said Ms. McCachren.

Both father and daughter said that they had little scholarly disagreement and much shared love for the "narratives in Genesis, the archetypes that we see coming out of our creation narrative and what it means about humanity," said Ms. McCachren, who believes it set the stage for everything else that happens in the scriptures, "and yet it's in such symbolic terms."

"We talk about the prophets a good bit. Amos . . .," she said, glancing at her father to prompt him. "Let justice roll down like waters and righteousness like a mighty stream," they recited together.

Ms. McCachreen told a story of a reading with her book group at a library in McConnellsburg. The book was about the gun control debate from the perspective of an emergency responder to Sandy Hook. Word got around. About 15 men, likely carrying firearms, showed up to the library to protest.

The McConnellsburg pastor reported that she politely asked them, "So you all have read the book?" Unsurprising to her, they, in fact, "just wanted to sit there and be intimidating and control the situation," she said.

Which is funny, because the "the entire point of the book was telling you to listen to each others' stories. I knew people just wanted to say, 'I want to go hunting with my grandsons.' "

"Listening diffuses so much if people would just do it more," said Mr. McCachren. Like clockwork, employing her own tactic to listen and say "yeah," Ms. McCachreen reported that protestors and book group members alike left the library that night having said their piece and telling each other to "have a good evening."