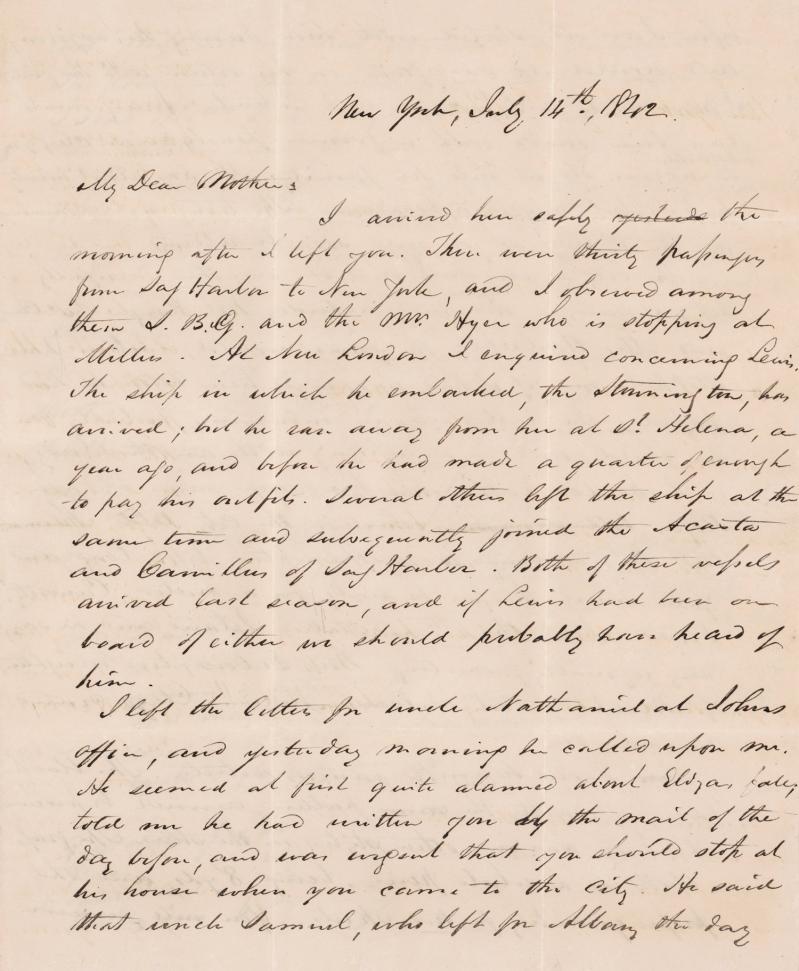 East Hampton Library Item of the Week: On July 14, 1842, Alexander Gardiner wrote to his mother, Juliana McLachlan Gardiner, in East Hampton. Alexander sent news of family and friends, along with business interests. Two years before, in 1840, his parents whisked his younger sisters off to Washington, D.C., to avoid the scandal that followed his sister Julia (1820-1889) modeling for a lithograph advertisement. In the years following, Juliana, her husband, and daughters spent much of the next year traveling through Europe, later splitting their time between Washington, D.C., and East Hampton. By the time of this letter's writing, Alexander's sister Julia had been introduced to President John Tyler at a White House reception several months earlier. She would later marry him in 1844, becoming first lady of the United States.

During these travels, Alexander and his brother, David, maintained an extensive correspondence with their parents. By contrast, Julia seems to have rarely sent anything. In this letter, Alexander reassures his mother that he had arrived in New York City safely with 30 other passengers.

Alexander attempts to account for various bills, such as "paints and brush," gloves, a bootmaker, and library dues. He also reports on his efforts to find matching fabrics and laces for his sisters, indicating that he's sending "the lightest pink" gloves available at Stewart's department store. This letter may feel familiar to many who are often asked to pick up specialty items in the city, or those who have spent years tending the home fires.

Alexander reports that his brother enjoyed the Fourth of July on Staten Island, where his mother's family owned extensive property, adding news from his father's brothers, Uncle Samuel and Uncle Nathaniel. According to Alexander, Uncle Nathaniel felt "alarmed" over Eliza, most likely his daughter Elizabeth Dayton Gardiner (1831-1916), who probably shared a nickname with her mother, Eliza Fraunces Gardiner (c. 1797-1842). Nathaniel's anxieties seemed to revolve around arrangements for his daughter's education.

Perhaps even more concerning is the news Alexander sends about a lost seaman identified only as Lewis, who left on the Stonington, a whaling ship, before possibly changing to another Sag Harbor whaler during his voyage. Mysteriously, Lewis did not come back with either ship.