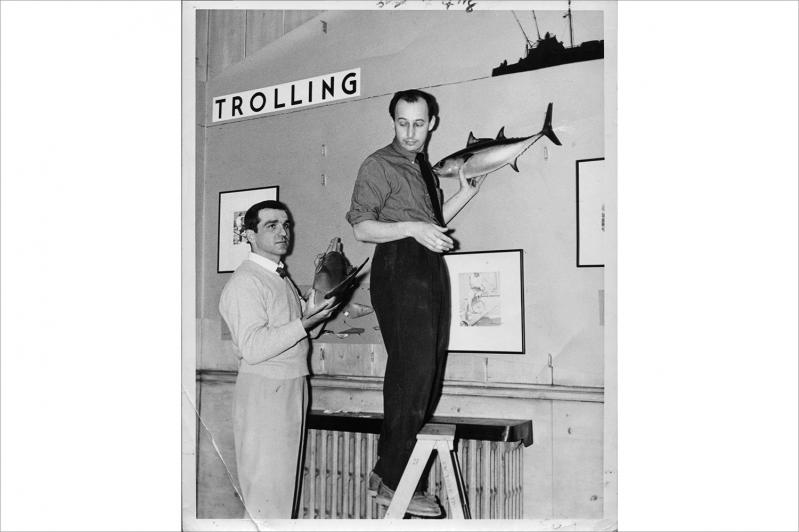 Fans of Peter Matthiessen's "Men's Lives" may recognize the name Ralph Carpentier (1929-2016) from his gorgeous illustrations of fishing equipment featured in the special edition of that book. But before Matthiessen ever started writing it or Doug Kuntz became concerned with documenting the baymen's disappearing way of life, Carpentier installed an exhibition at Guild Hall called "17 Fish of Eastern Long Island and How They're Hunted" in May of 1959.

In this photograph from the installation, Carpentier appears on a ladder, with John Lonero behind him. Each man holds a mounted and preserved fish, presumably being added to the exhibition. George Griffin also played a key role in the installation, which was a fascinating moment of art meeting education.

The local artists database of the Long Island Collection has three other images taken from the installation, and they clearly convey the way Carpentier combined history, information, and artwork.

The 17 fish featured were blackfish, porgy, swordfish, striped bass, sea bass, blowfish, butterfish, weakfish, cod, bluefish, tuna, mackerel, whiting, marlin, bunker, fluke, and flounder, all of which could be caught by fishermen here at the time. More than 50 artists contributed models and displays, conveying information that wasn't readily available in the days before Google, including information on fish migration patterns and the work that went into the fishing industry.

The East Hampton Star reported at the opening that the show included "models of boats, purse seines, pound traps, shellfish displays, marina models, and other illustrative materials made especially for this exhibition by fishermen and artists." Gear mixed among paintings and photographs included charts, fish mounts, a harpoon, a blubber paddle, a motorboat, a beach buggy, a dory, tackle, fish mounts, and a skindiving outfit.

An estimated 4,000 people saw the show in the three weeks it was open at Guild Hall.