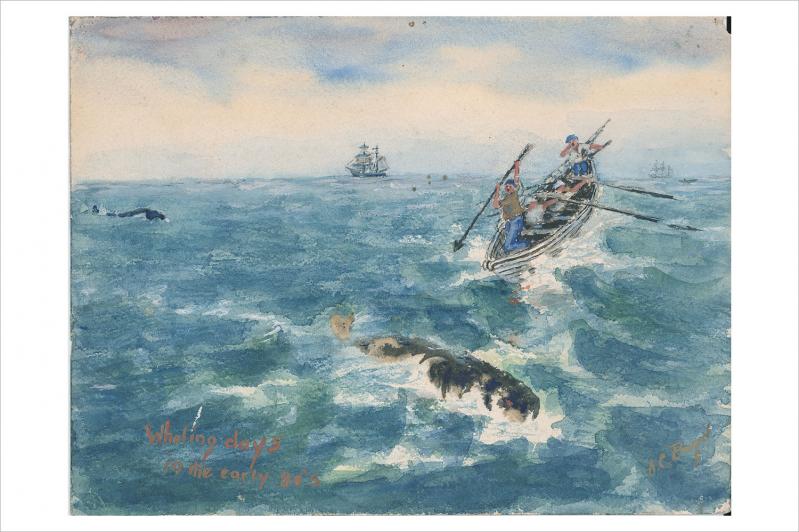 This watercolor was painted by the Sag Harbor artist, historian, and author Annie Burnham Cooper Boyd (1864-1941). The Sag Harbor Presbyterian Church owns a few of Annie Cooper Boyd's paintings, including this one. As part of a project to digitize their archives, these paintings were also scanned by the Long Island Collection.

In this painting, Annie depicts a whaling hunt scene featuring a whaleboat approaching a surfaced whale. One man is shown with his arms outstretched aiming a harpoon at the whale. A larger whaling ship can be seen in the distance awaiting the return of the whaleboat. The date of this painting is unknown, but the last whaling ship left Sag Harbor in 1871, so Annie probably painted this as a retrospective. Given her life span, she probably didn't paint this until at least 1880. In her diary on January 19, 1884, she recorded her first whale sighting while boating, which could have inspired this painting.

The image also likely reflects the tales of the whaling industry Annie grew up around. As a child, she would have known many of Sag Harbor's great whalers. Her father, William Henry Cooper (1816-1894), was a third-generation whaleboat builder in Sag Harbor. According to the Cooper family papers at the Long Island Museum in Stony Brook, William Cooper built 747 whaleboats during the early 19th century. After Sag Harbor's whaling industry collapsed, William and his brother Gilbert opened a general store on Main Street. Some of the tools he used as a boat builder can be seen at Annie's former home, which is now home to the Sag Harbor Historical Society.