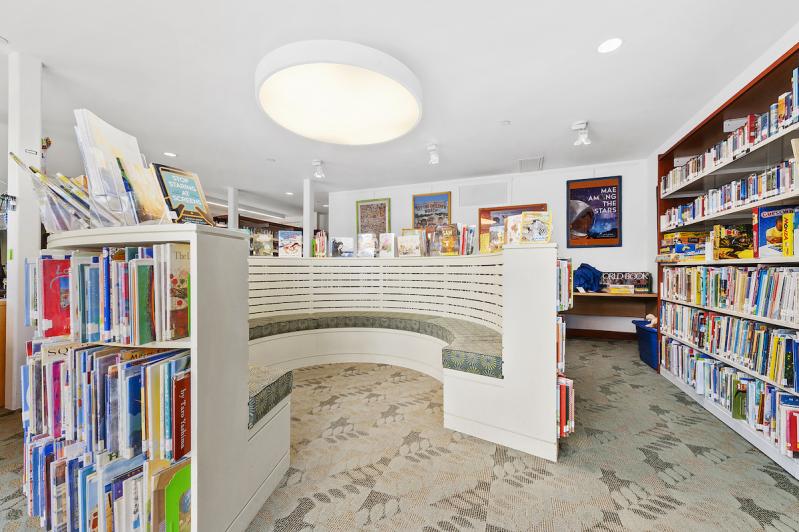 In 2017, Kelly Harris, director of the Hampton Library in Bridgehampton, was approached by a group of local teenagers, supported by the teen librarian at the time, Amy Wall. The library had a space for grown-ups, a space for children, but none for them, the group argued.

Ms. Harris agreed. As the library was configured, teenagers "didn't have a space where they could all land together."

Prior to the meeting, there was friction over noise and library usage between the adult and teenage patrons. After meeting with the board of trustees, library staff, and students, Ms. Harris said she realized, "Perhaps we aren't using the space to the best of our ability." The library's last upgrade had been designed in 2006 and finished in 2009. At that time, it was a "rare occasion" for young adults to visit the library aside from picking up a book for school; now, the bus drops off teens daily to hang out, do homework, and check out books, said Ms. Harris.

To serve the community more effectively, Hampton Library is planning a series of renovations working with H2M Architects and Engineers to design intentional spaces for the community's teens, in particular. The library was able to host eight discussions last fall and over the winter at which people were invited to comment on the renovations.

It will soon embark upon a dual grassroots and capital campaign to finance the project.

The proposed renovations are intended to render the space flexible and fix practical issues. In the lower level of the library, a carpet and squeaky floor will be replaced with imitation wood floors which are quieter and easier to clean. The current layout places the children's activity tables — generally noisy — next to the program room, a source of tension when philosophy groups met next to a children's read-aloud, for example. The new layout will move story time away from the program room and create a space buffer between the two.

The ground floor will house the new teens' space and larger meeting rooms. The library plans to redesign the front desk area, decreasing the desk's length and creating a self-checkout by the entrance. On the other side, where the DVD stacks are now, will be the teens' room. This was a strategic choice to place the often-louder teens closer to the busier areas of the circulation and reference desks. The literacy room, a small space now used for educational programs, will double in size to accommodate groups of 15 to 20.

Pre-pandemic, the renovations were expected to cost $1 million. The pandemic, however, resulted in increased materials and construction costs, inflating the final cost to closer to $1.5 million. The library is looking into ways to fill the half-million-dollar gap. It has money in its reserves and received a "very generous" donation in the form of trusts, according to Ms. Harris, including a significant one from Elizabeth Ebel.

The library wants to provide other community members an opportunity to contribute through small fund-raising efforts like lemonade stands. "It's great to have your name on the wall," Ms. Harris said, "but we also want people who do not have that [level of capital] to be able to take ownership in our fund-raising."

The renovation team aims to begin the project in the next 10 months to a year. All of the renovations will take place within the existing footprint of the building, with renovations and fund-raising set to take place simultaneously.

Ms. Harris emphasized the necessity of having a space "where we can reinvent ourselves as needed" for the diverse patrons and programs the library welcomes. The space should be "a comfortable place to come write a paper for school," she said, "or the great American novel."