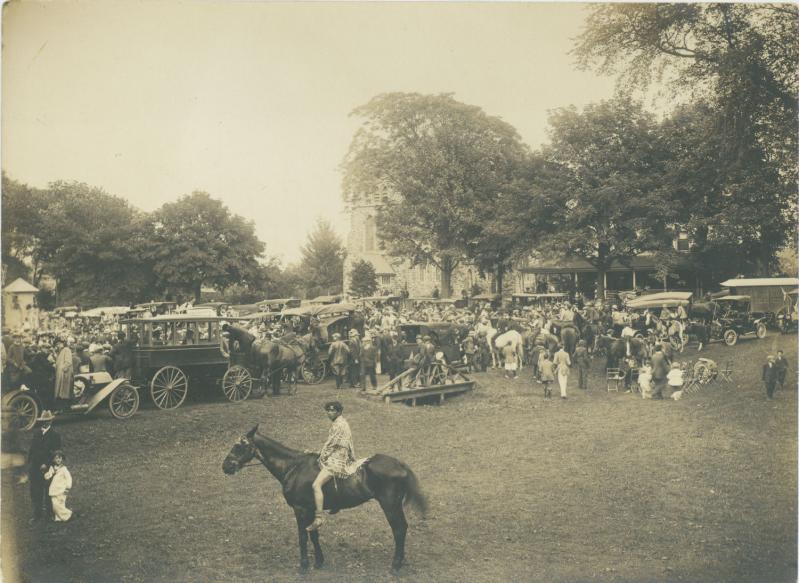 This July, the South Fork will welcome back many Independence Day celebrations that were missed last year because of the pandemic. While the village has not hosted a Fourth of July parade in a long time, it was part of the annual festivities decades ago, as shown in this photograph from 1915.

John H. Fowler (1887-1925) appears costumed on horseback in front of a large crowd in this photo by Frank Eldredge (1885-1965). Behind the crowd, St. Luke's Episcopal Church can be seen, suggesting the photo was taken near the village green.

The day started with thick fog, leading to concerns about whether the celebration would happen. Around noon the wind picked up, and by two o'clock the parade commenced. The procession started down Main Street, led by the Riverhead Brass Band, with automobiles and several floats.

Mrs. Harry Hamlin's realistic barnyard float featuring haystacks, scarecrows, and livestock won the competition. Another remarkable float was I.Y. Halsey's miniature of a village windmill, complete with moving sails, which he mounted atop an automobile. Edwin Halsey, Dan Tucker, and George Smith made a battleship float. The builder George Eldredge & Son created a model of the John Howard Payne home, and the Quilting Party dressed up as early East Hampton settlers.

In the evening, more than 4,000 people and 600 automobiles gathered on the beach to see a fireworks display organized by Walter Keck and Felix Dominy. The East Hampton police and the public commended each other for the successful event, which resulted in zero incidents or arrests.

Recently, LTV Studios in Wainscott came across an old reel of 35-millimeter film. Working with Joe Lauro of Historic Films in Greenport, it was determined that the reel contained footage of East Hampton's 1915 Fourth of July parade. This extremely rare, restored film — colorized and with period sound effects added — will air on LTV over the holiday weekend. The LTV schedule can be checked for times.

It is a remarkable glimpse of life here more than a century ago, featuring a Main Street setting that is still recognizable today.