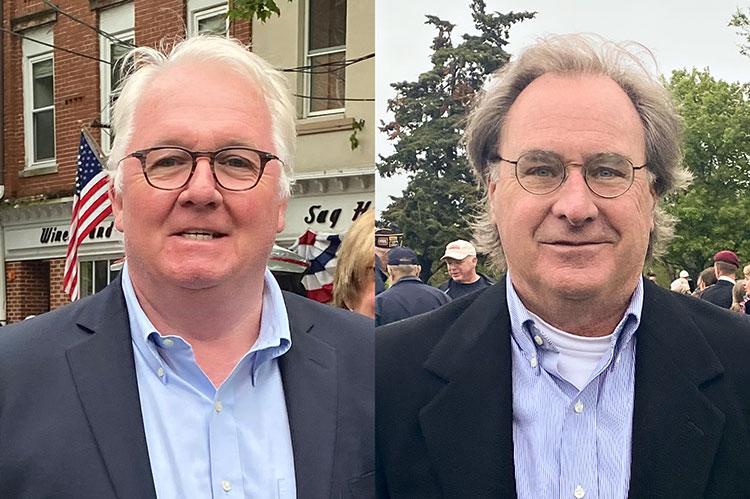 Aidan Corish and Bob Plumb, Sag Harbor Village Trustees who are running to keep their seats in the June 15 village election, talked this week about their separate priorities. Mr. Corish, Mr. Plumb, and a first-time candidate, Bayard Fenwick, are vying for two seats on the village board.

Mr. Corish, who is running for a third and final term said that if he is re-elected, he would continue to focus on protecting water quality by connecting more properties to the village's sewage treatment plant.

Mr. Plumb, who is seeking a second term, touted his efforts to protect the village from overdevelopment in an interview on Tuesday.

"It's incumbent on you to take on a legacy project," said Mr. Corish, who, as the village board's liaison to the sewage treatment plant, has been developing a master plan to extend the plant's service area to include Rose and Garden Streets, and other neighborhoods where septic systems pose a pollution threat. A recent study of the village's water quality by Dr. Christopher Gobler of Stony Brook University found high nitrogen and bacteria levels at several trouble spots including Havens Beach, but noted that the plant has been operating effectively. "It's the unsung hero of Main Street and our prosperity," said Mr. Corish. "As the water goes, so goes the village."

His immediate goal, he said, is to get a detailed plan to extend the plant in place by the time the federal government makes funding available for infrastructure projects. "That way we can say, 'It's here, it's big, I have prices, and here's the engineering,' " he said.

Because it is not economically feasible to connect the entire village to the plant, Mr. Corish said he would also like the village to incentivize residents to install nitrogen-reducing septic systems.

Developing new ways to fix the water quality issues at Havens Beach will also be a priority. "It's unconscionable," he said of the elevated levels of fecal bacteria Dr. Gobler found emanating from a drainpipe there. Mr. Corish said restoring the beach's wetlands, which help remove pollutants from stormwater runoff, could be a viable solution.

As a means of protecting the village from overdevelopment, he supports the effort to develop a new zoning code for the waterfront area, and laments that the proposal has gotten bogged down by heated arguments. "I wish people didn't dig in in a way that doesn't allow for discussion," he said.

Although he criticized Bay Street Theater's initial proposal for the theater complex it is seeking to build on the Water Street Shops property, he would like to see the theater construct a more scaled-down building on the site. "They tripped up badly, but there's a chance for a second act and plot twists," he said.

While serving as a member of the village's zoning board of appeals, Mr. Plumb cast the sole vote against Jay Bialsky's proposal for the 2 West Water Street condominium complex, he noted, and he has been equally skeptical of Bay Street Theater's initial plans to build a new home on the Water Street Shops parcel. "You don't take a developer's first shot out of the cannon, you push back a little bit," he said.

In general, "The real estate is finite whereas the developers' interest is not," Mr. Plumb said of the village. To ensure that builders adhere to code, and that the zoning board of appeals, and planning, and historic preservation and architectural review boards have all the information they need to properly assess a proposal, he has helped develop a new building permit application, he said. That is a time-saving measure for both applicants and the volunteer members of the boards.

"We don't want to squander their energy," he said. "And we're trying to put the fear of God into people by saying, 'You have to follow the rules. Whatever you apply for, you build.' "

Although trying to manage development is often "frustrating," he said, "I enjoy it because we're trying to do some good here."

Along with Mayor Kathleen Mulcahy, Mr. Plumb is a member of the waterfront zoning committee, which has been overseeing the development of a new zoning code for waterfront properties. The new code will be the key to preventing overlarge structures from being built along the waterfront, he said. He criticized James Larocca, a trustee who is running for mayor against Ms. Mulcahy, for proposing to scrap the effort. "If you throw the whole thing out, that means we revert back to the existing zoning code," Mr. Plumb said, and that would allow developers to construct buildings that block access to and views of the water. "I'm not running for mayor, so it's not really my battle, but I feel strongly about it because that's part of reining in overdevelopment."

To effectively manage the village's growth, it will be necessary to undertake a village-wide transportation and traffic study, he said, and suggested that developing a shuttle system to transport people to and from underused parking areas might help solve the village's chronic lack of parking. "There's a finite quantity of parking, and at some point the village is going to be overbuilt," he said. "We have to roll all of that into the study."