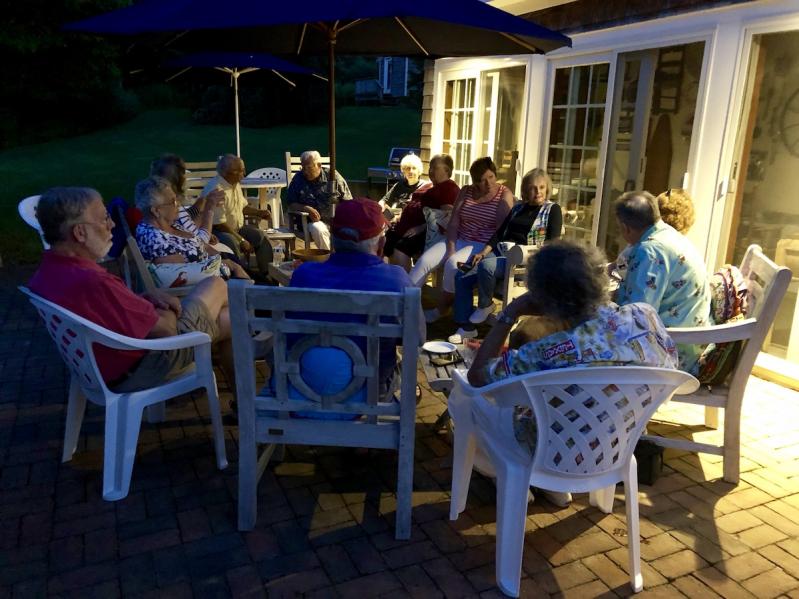 The East Hampton High School Class of 1961 has been holding annual reunions since 2008, pictured above.
By Zoe Lubetkin

The 60th reunion of the East Hampton High School class of 1961 will take place via Zoom this year on June 25, but along with the festivities will come a solemn reminder of loved ones lost along the way.

The class of 1961 is donating a memorial tree to be planted at what is now the East Hampton Middle School, but which was simply "school" to these graduates, as it housed kindergarten through 12th grade before the high school opened in 1970.

Carol Baker, who in 1961 was senior class president, suggested a tree donation project to honor classmates who have died. Of the 70 students who graduated in 1961, 23 have died. A core group of survivors still lives in East Hampton, but others are scattered around the country, among them Ms. Baker, who lives in Maryland.

"We've always been close," she said of her classmates, describing a "communal" high school experience of walking to school and ice-skating together on Town Pond.

Starting in 2008, everyone who could make the trip attended annual reunion dinners at the house of a classmate, Dennis D'Andrea. Complicated travel conditions this year, however, required a change in format. Ms. Baker suggested a tree donation to the middle school to supplement the online gathering. Along with Mr. D'Andrea, she drafted an email outlining the project and a suggested contribution. Donations from 18 classmates raised $2,880.

As the project developed, Ms. Baker consulted with the principal, interim principal, and groundskeeper of the middle school; the arborist at Whitmores, and the Ladies Village Improvement Society tree committee. The tree, a Japanese stewartia, will be planted on the middle school grounds to replace one recently lost in a storm.

It was important to the group that the school administrators were involved in and excited by the tree donation project.

"We've been very careful to do it with them . . . not to just go off on our own," Ms. Baker said, adding that the class is happy that the community views it as "the gift we meant it to be."

The tree will be planted on June 22, before the rising of the current eighth-grade class. Ms. Baker is considering flying back to watch the planting with local classmates. "This only happens once in my lifetime," she said.